The #EndSARS Movement and What We Can Learn From It

About the #EndSARS Movement, and why it matters

Delali Bruce
and
November 19, 2020
in
World
Courtesy of Al Jazeera 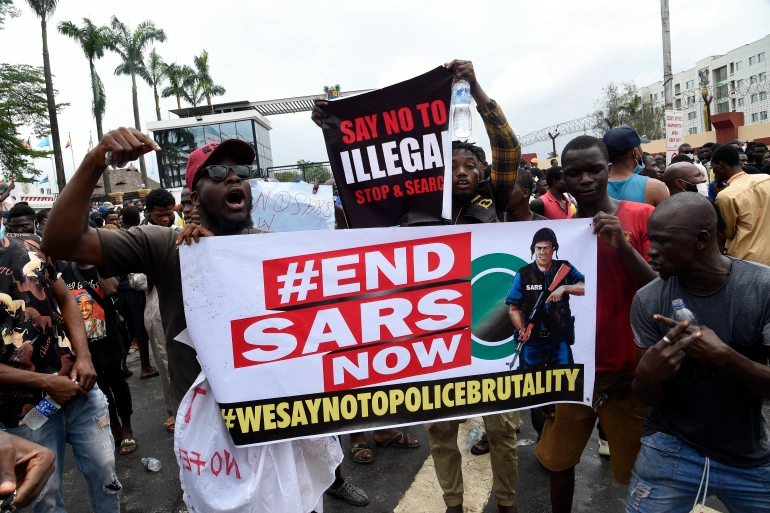 In June of 2020, Amnesty International, the non-governmental human rights organization, reported that they had documented “at least 82 cases of torture, ill treatment and extra-judicial execution by SARS between January 2017 and May 2020.” Following this report, on October 3rd, a video of an innocent man murdered by SARS police sparked national protests across Nigeria and a definitive call to dismantle the SARS police force.

SARS, which stands for Special Anti-Robbery Squad, is a Nigerian police unit that was originally created in 1984 to fight crime and violence. While it did initially fulfill its intention, it has become corrupt with, as Highsnobiety reports, “human rights abuses”, which include “widespread torture and other cruel, inhuman, or degrading treatment or punishment of detainees in their custody, including hanging, severe beating, extra-judicial killings, and sexual harassment of women”.

It is the events of October in which SARS officers were filmed unjustly killing a man in Ugelli, Nigeria, that sparked nationwide demonstrations calling for an end to the SARS unit. Paired with these demonstrations was the hashtag #EndSARS, which spread like wildfire on social media, raise awareness on an international scale. Many celebrities, such as Nigerian natives John Boyega and Burna Boy, took to social media as well, voicing their solidarity with the protesters in Nigeria and bringing the #EndSARS movement closer to mainstream channels.

Initially, Nigerian officials denounced the October video as fake, which incited further anger and unrest from Nigerians, especially because a vast number of them, young people in particular, had come out and shared stories of how they themselves had been targeted by Nigerian police for innocent actions such as wearing jewelry or owning extravagant clothing.

Eight days after the protests began, the President of Nigeria, Muhammadu Buhari, announced that the administration would be completely disbanding the SARS unit in response to the demands of the protesters. However, such promises unfortunately proved false following the release of information that the Nigerian Inspector-General had assembled a nearly identical unit to replace SARS called the Special Weapons and Tactics Team, into which many people who had previously held positions in SARS were relocated.

On the other side of the world, the United States has been undergoing its own reckoning regarding the wide presence of police brutality and the use of excessive force. There is so much that the U.S. can learn from the #EndSARS movement in Nigeria, and there are clear parallels between the two situations. For instance, in both America and Nigeria, in response to intense demonstrations against police brutality from their citizens, police forces responded with even more brutal force, which in America took form through tear gas and rubber bullets, resulting in massive (largely non-lethal) casualties, and in Nigeria, resulting in both non-lethal casualties and the deaths of many innocent civilians. At the same time, however, there are a few major differences. Take, for example, the Nigerian government’s relatively swift response to the protests, albeit performative at best, whereas in the U.S., the sitting administration has yet to recognize the presence of a problem at all, let alone present and pass a unified and organized plan to combat systemic issues of police brutality.

The SARS crisis in Nigeria reaffirms the idea that power can corrupt, and that it is up to the people to demand justice and hold authorities accountable. Just as the rest of the world showed support and solidarity during the United States’ Black Lives Matter protests in June, it is paramount that the world does the same for the people of Nigeria, the seventh largest national population on the planet.

As Martin Luther King Jr. once said, “Injustice anywhere is a threat to justice everywhere.”