Valentin Espey (he/they) is a 17-year-old trans artist seeking to elevate the status of the LGBTQ+ community and promote a sense of understanding within society. 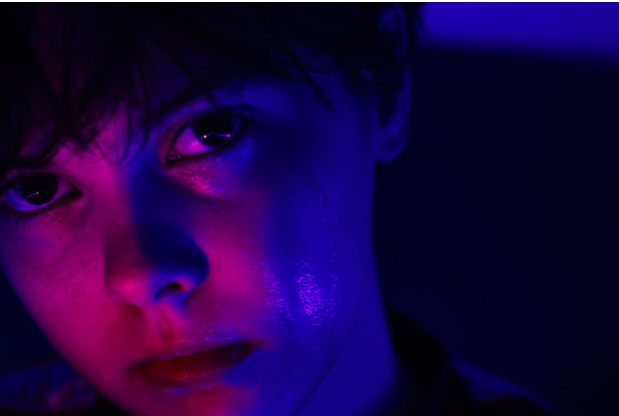 Valentin Espey (he/they) is a 17-year-old trans artist seeking to elevate the status of the LGBTQ+ community and promote a sense of understanding within society. His work examines vulnerability, gender nonconformity, and nostalgia through writing, poetry, and photography. A staff contributor for Uniquely Aligned, president of the Young Socialists of Randolph organization, and member of Citizens Climate Lobby, Espey hopes to inspire on a local and national level. Recently I had the honor of interviewing him on his art, activism, and identity.

What inspires your art? How has your identity impacted your art?

I got my first camera in 2018, and my first works were highly experimental self portraits inspired by an artist named Johanna A. (@grl.on.film.) The year I got my camera was the same year I had really began to accept I was trans. This realization was difficult to come to, and I struggled for a long time with “how” to be trans. There’s a severe lack of representation for transmasc and nonbinary teens like myself, so finding confidence in my body was extremely difficult. I didn’t know how to love my body because no one had shown me it was possible. Self portraiture was my way of conversing with my body, my identity, and my insecurities. The documentation of my existence as a trans person is an act of self-liberation.

As a staff contributor for Uniquely Aligned, what topics have you addressed and how?

I admire Uniquely Aligned because their editorial board has always been incredibly open to any ideas that comes their way. In August, I published my first visual essay via their website, and it documented my ongoing struggle with the concept of gender as it exists within a binary-operating society. Bridging the gap between my written and visual work has always been a point of interest for me, and with that visual essay I was able to accomplish that. Right now I’m working on a photo series that chronicles my life with chronic illness as well as an article on why it’s okay to be bad at art (in fact, more of us should be.) My work is always political, even if it doesn’t immediately seem to be. To me, “not caring” about politics is a privilege.

How does addressing stereotypes/struggles through a creative lens impact your view of the world? How does it impact others?

Capturing my experiences, good and bad, via my photography has been my most crucial healing tool. The impact it’s had on my life has been invaluable, yet it took me several years to integrate art into my daily routine. The reason for this is simple. I did not think I was capable of being “good” at art; therefore, I did not view anything I produced artistically as being worthy of value. This is a mindset too many of us get trapped in as a result of the hypercompetitive society we live in. It’s common for public school students especially to be tricked into believing that if we are not creating good or valuable work, that work is not worth our effort at all. For viewers of my work, my main goal is to inspire them to put value into their own narratives. I would love for my photography, poetry, etc. to motivate others to prioritize their emotional catharsis and view what brings them contentment as intrinsically valuable no matter the perceived “goodness” of the final product. There’s a lot I am still improving on in my work, but what matters is that I am creating.

How can schools change to better accommodate young trans students? What are some ways for students to bring about this change?

Schools must give transgender students the agency they deserve. Too often they are dehumanized by being denied the basic rights afforded to their cisgender peers. These rights include the ability to access sex-segregated facilities and activities (bathrooms, locker rooms, team sports, etc.) and the ability to use their correct name and pronouns. There is a misconception that transgender students are “too young” to fully understand who they are and their identity is incorrectly seen as another “phase” of adolescence. This is a false and belittling belief. There are several ways students can fight to create a more just environment for their transgender peers. Firstly, it’s important to always seek out understanding and to stay informed. Be aware of your rights. The discriminatory behavior I described above is in fact prohibited under Title IX protections. The organization “Know Your IX” does incredible advocacy work in this regard that I very much respect. Also, consider how your own practices contribute to misunderstanding. There are simple ways you can be more inclusive of trans people in your speech: introducing your own pronouns alongside your name, including trans and nonbinary individuals in the fight for reproductive justice (it is not just women affected by abortion access), speaking about gender as a spectrum rather than a binary, etc. Once you feel confidently educated on these topics, you can more easily reach out to administration to share what you have learned and address any discriminatory practices you’ve witnessed in your own school. Encourage your health programs especially to consider the rhetoric they use regarding sexual and reproductive health (ex: not all female bodies have vaginas.) Correct your teachers and peers if you hear them misgendering someone or speaking in a transphobic way.

How has the current political climate impacted your activism? Why is it important for students to call for change and stand up for their beliefs?

Since the election of Donald Trump, I think many people of my generation have paid more attention to politics. I was in eighth grade during the race for the 2016 election, and it was the first time I had begun to really challenge American institutions and policies. Bernie Sanders was a personal inspiration to me during that time. My views have been continually evolving, and I know there is still so much to learn. More than ever I am aware of the need for pointedly anti-capitalist action and for community healing. I also know that it is not just Donald Trump that is the issue, which seems to be an unspoken belief held by the Democratic Party. The history and institutions of this nation that allowed Donald Trump to take office will not just disappear after he’s gone, and the work will be far from over. I believe it’s important for students to be vocal about their experiences and beliefs because silence is often associated with shame. By being vocal about your experiences and political beliefs, you contribute to a collective and defy the expectation of our society that you view your peers as competitors rather than collaborators. There are a lot of corporations out there that would prefer you be private about your struggles because they profit off of your isolation and insecurities. It’s possible for you to change that.

What are your goals for the future?

Right now I’m putting a pause on magazine contributions to work on my first poetry chapbook which has been a long time in the making. I’ve also been considering making prints of my pictures. In the much longer term, I want to continue studying the concept of collective healing. I always want my work to serve and empower my community, whether that be the trans community, my immediate geographic community, or fellow victims of capitalism. I’d love to run free art and poetry workshops in the future, making them as accessible to low-income families as possible. Alongside that, I’m considering becoming a teacher or local politician. I’d also like to continue studying gender as well as conduct important, necessary research regarding transgender experiences and the role of gender in American society. No matter what I do though, healing is the priority.