The xenophobic overtones of Spill Your Guts or Fill Your Guts coupled with the grimacing reactions of influential celebrities make greater space for further racism.

Siobhan Stack
and
September 12, 2021
in
Representation
Courtesy of CBS 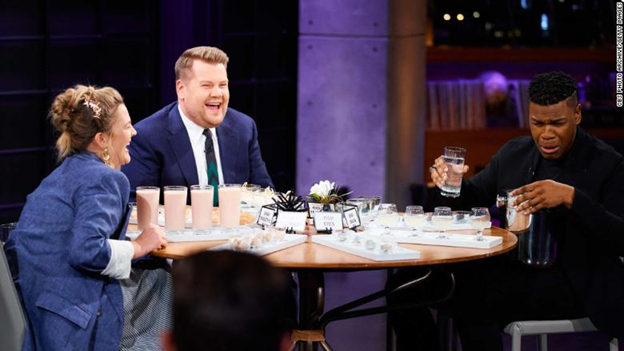 James Corden, the host of late-night comedy and talk show The Late Late Show on CBS, has recently received backlash over the cultural insensitivity of one of his most popular segments. Called Spill Your Guts or Fill Your Guts, the segment dares celebrities to either answer a gossipy, scandalous question or eat a food that is deemed undesirable if they cannot answer it.

After watching a few episodes of the series, I could not help but notice the way that both the celebrities and Corden laughed and winced as each of the foods was introduced. Though some of the foods were merely unconventional concoctions, many of them were Asian cultural delicacies. Regarding these foods as “disgusting” without any cultural context is extremely offensive and demeaning.

The pandemic caused by the SARS-CoV-2 virus has had a devastating impact on the world; in addition to the deaths and losses, a reinvigorated wave of anti-Asian racism and hate has infected the world. Asian hate crimes have run rampant, and the Coronavirus was racistly dubbed by many as “the China virus.” Contributions to such intolerance and discrimination on public television are extremely harmful. Asian cuisine is already commonly mocked, and the xenophobic overtones of Spill Your Guts or Fill Your Guts coupled with the grimacing reactions of influential celebrities make greater space for further racism.

In early June, Asian American activist Kim Saira posted a Tik Tok to shed light on the anti-Asian racism that The Late Late Show segment amplifies. She noted that she remembers eating many of the foods used in Spill Your Guts or Fill Your Guts throughout her childhood and that they possess immense sentimental value for her. Some examples of these foods are balut, century eggs, and chicken feet. After drawing attention to the issues that exist within Corden’s segment, Saira created a petition on Change.org to remove it from the show. In her description, she points out the vast influence and publicity that the series has. She states, “So many Asian Americans are constantly bullied and mocked for their native foods, and this segment amplifies and encourages it.” Additionally, she requested that the food on the segment was changed completely, that an apology is issued from James Corden on his show, and that funds are donated to Asian-owned businesses. Saira’s petition has over 47,000 signatures, and James Corden has been made aware of it. Corden responded informally and without an apology on The Howard Stern show; he stated that he will no longer use Asian foods on the segment and doesn’t know when it will continue again. Saira responded with an update on her petition that she is dissatisfied with his apology, but that she has closed her petition due to the hate that she has received because of it.

Why is this such a big deal? Isn’t the segment just a harmless joke?

Frankly, no. Even though Corden did not have outward, malicious intentions, the use and projection of Asian cultural foods in such a mocking and ridiculing way is morally wrong and encourages Asian hate. Going forward, it is important to be mindful of the impact of the media that we engage in because it can perpetuate harmful ideals.