The Climate Fight Isn't Just About the Environment 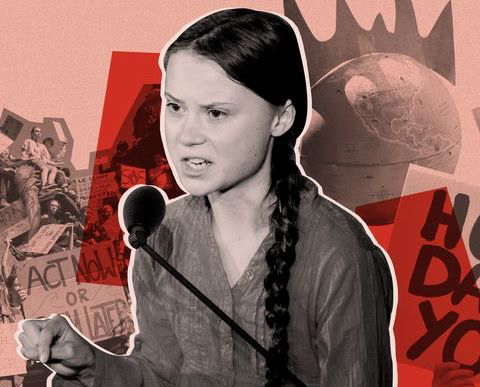 Greta Thunburg is a force to be reckoned with. The 16-year old climate activist has traversed the Atlantic in a zero-emissions boat, spoken in front of the US Congress, and inspired global climate strikes and conservation efforts. Her international campaigns have drawn worldwide attention, leading more and more people to push for action to protect our planet. Greta’s confidence and candidness is unwavering, even when she is holding powerful politicians and world leaders accountable. Her refusal to temper the truth about the dangers of climate change has sparked discomfort and resentment in people who refuse to acknowledge the reality of our planet. As a result, Greta has become a popular target for immature adults who displace their animosity toward proactive climate change measures.

Greta first gained attention in 2018 when she skipped school to protest in front of the Swedish parliament, holding a sign that read, “School Strike for Climate.” Since then, her actions have inspired millions and even motivated change on a political level. Greta Thunberg recently attended the United Nations Climate Summit, where she drew attention to world leaders’ failure to initiate action on climate change policies. Her electrifying speech at the Summit was widely celebrated; however, the topic she addressed made her a lightning rod for people who were unwilling to accept and act on the climate emergency.

The majority of Thunberg’s critics have been right-wing journalists, elected officials, and climate change skeptics. The attacks against Greta have come in many forms, but they share a commonality of devaluing her capabilities to discredit the legitimacy of climate change. In their efforts to impair Greta’s influence, her attackers also reveal more common and archaic societal biases: sexism, ageism, and ableism.

While sexism isn’t new to our society, its connection to climate change is a recent development. While criticism of Greta is not always explicitly sexist, criticism of her character often reveal sexist perceptions toward women - for instance, many disparage her passion as being overly emotional because of sexist notions about women’s emotions. As result of feminizing climate change, women like Greta are targets for conservative men who feel as though they are facing feminists in a culture war. As Martin Gelin wrote in the New Republic, Thunberg has attracted a “tsunami of male rage,” a rage that can be partly explained by the links between climate change denial and a particular type of affronted, aggrieved man who believes their masculinity is under attack from all sides.

Those who focus on Greta’s age as a way to debase the legitimacy of her statements demean her as naive and overbearing. One of Greta’s more notable critics, President Trump, responded to Greta’s speech with a sarcastic tweet that read, “She seems like a very happy young girl looking forward to a bright and wonderful future.” The ageism Greta faces is not a unique experience; a rise in youth activism has been paralleled by a rise in youth criticism. Laura Ingraham, the Fox News host, called her UN speech “chilling,” running a segment comparing the climate change “hysteria” among youth to Stephen King’s novel “Children of the Corn.”

In the midst of sexist and ageist comments against her, Greta’s battle against ableism is a struggle that is less commonly recognized. A unique feature that sets Greta aside from other activists is her autism. Her publicized position on the spectrum has led to people to denigrate her beliefs and leadership. Michael Knowles of the Daily Wire dismissed Greta Thunberg as a “mentally ill Swedish child.” Another right-winged media personnel, John Ocasio-Nolte, tweeted, “I can’t tell if Greta needs a spanking or psychological intervention…” These remarks are not only incredibly discriminatory to Greta but also highlight the stigma around the autism community. Bearing the weight of this prejudiced judgement with incredible fortitude, Greta remains outspoken and unashamed of her autism, even referring to it as her “superpower.”

Other right wing critics have taken a different approach to devaluing Greta’s influence by implying that her actions are not self-empowered. They have suggested that other adults are manipulating the activist for political gain. Others have called her a puppet for the left-wing media. While this approach is less aggressive toward Greta, it diminishes her value as a smart, passionate young person with unique thoughts and ideas.

It is disheartening to see such a young girl being the subject of so much criticism. However, Greta Thunberg’s ability to rise above attacks shows strength that surpasses that of many adults. Instead of addressing her critics by name, she simply said that she “didn’t understand why grown-ups would choose to mock children and teenagers for just communicating and acting on the science when they could do something good instead.”

"We become the bad guys who have to tell people these uncomfortable things, because no one else wants to, or dares to," Thunberg said. "And just for quoting and acting on these numbers, these scientific facts, we receive unimaginable amounts of hate and threats. We are being mocked and lied about by elected officials, members of parliament, business leaders, journalists. You can't simply make up your own facts. There is no middle ground when it comes to the climate and ecological emergency."

Thunbergs’s words display clear maturity and intellect, when standing up with what she believes and dealing with those who target her with spiteful comments. Above all, she demonstrates that there is some hope in the future - and that hope is with the youths.