Racism in professional English football is not a new phenomenon.

Isha Umamageswaran
and
August 10, 2021
in
Sports
Courtesy of National Post 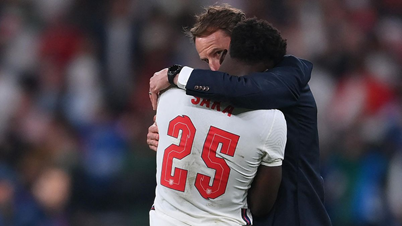 The 2020 UEFA European Football Championship took place from June 11th, 2021, to July 11th of the same year. While there were 50 different matches played over the course of the championship, only one of them resulted in the ramifications of several English soccer fans’ heinous racist abuse.

During the final match of the championship, England competed against Italy for a chance at winning the prize money, the Henri Delaunay Cup, and the famed title of “Championship Winners”. However, when players Jadon Sancho, Marcus Rashford, and Bukayo Saka (the only three Black members of the team) missed their penalty kicks towards the end of the game and Italy obtained the win, apparent ‘fans’ of the England team began to spew malicious comments at the three. However, not only were the three players verbally abused, but were also taunted online and were on the receiving end of several acts of vandalism. From tweets to wall graffiti, racist beliefs were surrounding England everywhere.

Immediately after news of the outbursts circulated around the world, high-ranking officials such as Sadiq Khan, Boris Johnson, Prince Harry, Prince William, and even other famous Brits such as Tom Holland and David Beckham condemned these acts. Multiple figures proclaimed their shunning of fans’ racism, while others explained that fans who abused the members should not be able to call themselves fans of the team at all. On the other hand, many supporters of the players question administrators’ true values. Boris Johnson, for example, refused to condemn fans that booed for English players taking a knee at the championship. David Olusoga, a British historian and filmmaker, compared Johnson’s duplicity to that of “an arsonist calling out the fire brigade.” This hypocrisy from leaders could be the reason why racist acts continue to occur.

Racism in professional English football is not a new phenomenon. Whether it be fans of England’s team or their opponents committing the racist acts, English football players have had to deal with similar abuse for decades. In the 1920s, popular footballer William Dean faced several occasions of racial abuse. Several fans of the English team targeted him for being dark, even giving him the nickname, “Dixie Dean”. On a separate occasion in 1938, he was threatened by a spectator of the game as he was leaving the pitch. Studying the sociology behind the sport’s racist history is Dr. Jamie Cleland, a Senior Lecturer at Staffordshire University. He argues that humanity’s issues concerning race delve deeper than the surface and reveal themselves in everyday society. Recently, officials have started arresting citizens that participate or have participated in discriminatory acts such as racist tweets, vandalism, and physical/verbal abuse to decrease the normalization of these activities. While law enforcement is not enough to reach full accountability, forcing citizens to accept the consequences of their actions will create a big impact on society.

There is still an outpour of support coming from fans for Sancho, Rashford, and Saka. On a large mural of Rashford in Manchester, England, where racist acts of vandalism occurred, several soccer fans and supporters of the player left positive and heartfelt messages. In a tweet, Rashford later expressed, “The messages I've received today have been positively overwhelming and seeing the response in Withington had me on the verge of tears.” Saka also described his thoughts on an Instagram caption posted on July 15th, describing the recent support he has been receiving and his wishes for a more unprejudiced future. “There is no place for racism or hate of any kind in football or in any area of society and to the majority of people coming together to call out the people sending these messages, by taking action and reporting these comments to the police and by driving out the hate by being kind to one another, we will win. Love always wins.” Along with his two other teammates, Sancho described his gratefulness for his fans and his goals for the future. All three players seemed to agree on one thing: there is no room for racism in soccer.