As America furthers the disenfranchisement of millions of black citizen, does Colin Kaepernick's #TakeAKnee movement light the way to a future where those who care stand up against government injustice?

Katie Jain
and
February 23, 2020
in
Justice
Courtesy of WBUR 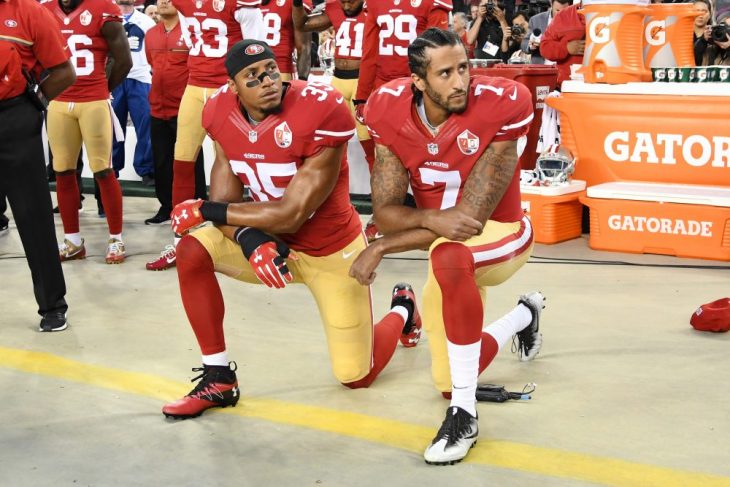 Amidst all the pain and anguish, the discrimination and fright, a movement blazes on in the US. Starting in San Francisco, #TakeAKnee has spread throughout America, as NFL players protest police brutality during the National Anthem.

Colin Kaepernick began this influential gesture last year when he refused to stand for the National Anthem, an act that gained him both hate and love. Now, after the horrifying act of white supremacy at Charlottesville, many other NFL teams have followed suit, peacefully and powerfully demonstrating their beliefs. Players from the Patriots, Jaguars, Browns, Broncos, Dolphins, and more refused to stand; teams such as the Steelers, Seahawks, and Titans wouldn't even enter the field until the anthem had finished.

This movement has naturally garnered controversy as it picks up speed around the nation. Donald Trump tweeted, “Sports fans should never condone players that do not stand proud for their National Anthem or their Country. NFL should change policy!” As if not supporting your country or your country’s actions is a crime, as if we are supposed to love and stand for the decisions that recently have been personally affecting so many people in such a horrible way. Similarly to Trump’s Broadway battle, this tweet sparked a war, but this time one against the NFL, prompting tweets from many famous athletes from all sports, not just football. In such a short period of time, rival players and rival fans, all began to unite for the social justice America has needed for a long time.

Soon, it was no longer just sports players taking a knee for their beliefs-- it was everyone. Throughout social media, no matter what age, no matter what race, those who believe in the #blacklivesmatter movement are showing their honor for America’s founding view of acceptance-- that this is a place for everyone regardless of where you come from or why you’re here. Everyone from teachers to doctors to actors to army veterans are willing to kneel for justice. Some have even pointed out the similarity between white supremacists now telling protesters “get up” to those saying the very same thing 57 years ago during the famous Greensboro sit-in when teenagers fought for their basic human rights at a lunch counter.

While it is empowering that so many people with so much influence are willing to stand up (or rather kneel down) for equality, there has been a lot of hate directed towards the movement. Previous fans are burning NFL jerseys, and Pence left a football game after players peacefully protested. Unfortunately for them, they seem to be relatively alone in their beliefs, especially as Pence and his family were the only ones to have left the game.

After the deaths of Brown, of Sterling, of Ferguson, after Charlottesville, after Trump’s words of a wall, after all the Islamophobia, it would seem that our country has fallen into a pit so deep we will never escape. This might just be a ladder being let down to retrieve us. To everyone who has been hurt, been bullied, been discriminated against: you are not alone. We will stand by you. The millions of people across America that supported this movement will stand by you. There is hope.