The Supreme Court’s decision “imposes even more suffering onto families who have come to the U.S. seeking safety and hope.”

Emilly Sanchez
and
October 3, 2021
in
Politics
Courtesy of Chicago Sun-Times 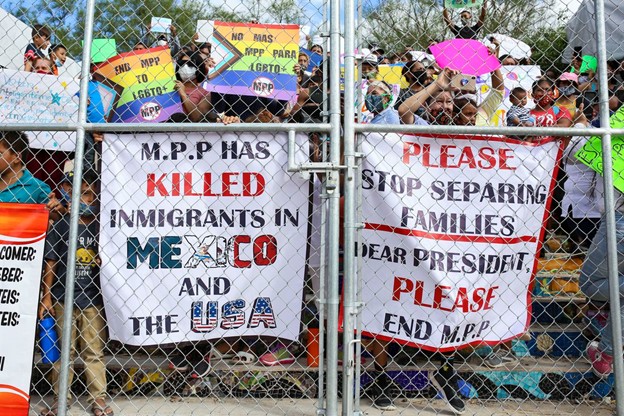 On September 14th, the Supreme Court denied the Biden administration’s request of placing a halt to his predecessor’s immigration policy requiring asylum seekers to remain in Mexico while waiting for a hearing in the U.S.

The court, with a 6-3 conservative majority, blocked President Biden’s attempt to cancel a federal judge’s order of reinstating Migrant Protection Protocols (MPP), also known as the “remain in Mexico” policy.

MPP was first instated in 2019 by the Trump administration in response to a substantial increase in asylum seekers from Central America arriving in the U.S. During this time, approximately 70,000 migrants were deported to Mexico and became victims of kidnapping, sexual assault, abuse, and exploitation after being located in some of Mexico’s most dangerous cities. While the purpose of their residing in Mexico was to await court hearings, only 4 percent of asylum seekers were actually represented by an attorney, and less than 1 percent were granted protection in the U.S.

During his first day in office, President Biden ended MPP and allowed for migrants waiting in Mexico to enter the U.S. after processing. However, later in April, the states of Missouri and Texas sued the Biden administration, citing complaints about the sudden influx of immigrants entering the country. In the lawsuit against the Biden administration, the states argued that without the revival of MPP, they would be forced to spend more resources fighting the human trafficking migrants were vulnerable to. Additionally, U.S. District Judge Matthew Kacsmaryk found that the Biden administration violated the Administrative Procedure Act by not giving proper reasoning for rescinding the policy, urging for its reinstatement.

The Biden administration argued that the reinstatement of the MPP would “intrude on the Executive's immigration-enforcement and foreign-affairs authorities by disrupting border operations, diverting scarce resources from other urgent priorities, and intruding into the nation's relations with Mexico and other foreign partners.”

In a brief order, Supreme Court Justices declared that the Biden administration “failed to show a likelihood of success on the claim that the memorandum rescinding the Migrant Protection Protocols was not arbitrary and capricious.” Opposing the court’s conservative majority, liberal Justices Sonia Sotomayor, Stephen Breyer, and Elena Kagen would’ve approved the request.

The Department of Homeland Security responded to the case in a statement that expressed its disagreement with the court’s decision but nevertheless willingness to “comply with the order in good faith.”

Many activists are wary of the future and safety of asylum-seeking migrants. Tami Goodlette, director of litigation at the Refugee and Immigrant Center for Education and Legal Services, an organization that advocates for immigrants’ rights, declared that the Supreme Court’s  decision “imposes even more suffering onto families who have come to the U.S. seeking safety and hope and instead must now stay in Mexico where they endure kidnapping, rape, and terrible violence.”

This case was the first insight into a Supreme Court’s ruling regarding immigration issues under President Biden’s presidency. Donald Trump appointed three federal judges during his presidency and was often granted approval to block lower court rulings that posed a challenge to his strict immigration policies. A large component of President Biden’s key promises toward the immigrant community in the U.S. was reversing Trump’s strict immigration policies, but with a majority conservative high court, eroding the restrictions imposed against immigration may be a greater challenge than anticipated.