A class without a teacher is like a boat without oars, bobbing aimlessly to and fro. 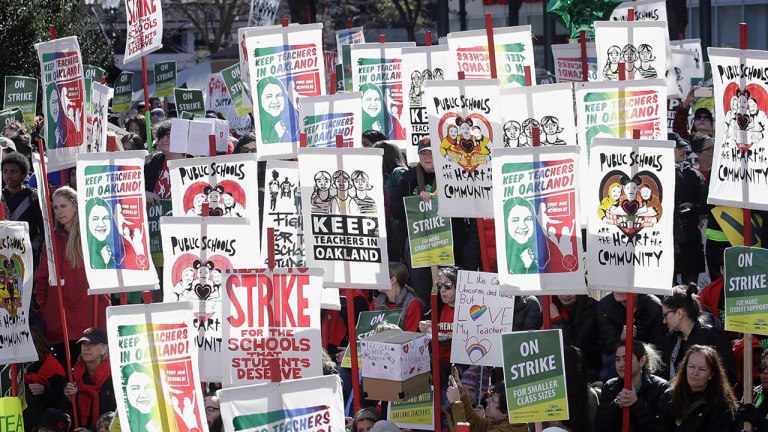 A class without a teacher is like a boat without oars, bobbing aimlessly to and fro. One would hope that our society is well aware of this and that it has worked to equip schools with qualified teachers—oars to the boat. If it has, however, then the people who decide the fate of our country’s schools—courts, lawmakers, local officials—have caused a thunderstorm, making public school teachers’ jobs more challenging than ever and teacher strikes more frequent.

Since the 2008 Recession devastated the finances of countless state governments, public education has suffered: in states like Oklahoma, Arizona, West Virginia, Kentucky, Colorado, and North Carolina, state legislatures have increasingly cut funds from public schools. Furthermore, numbers from the Department of Labor show that teachers’ relative wages have declined dramatically since the mid-1990s: according to the Economic Policy Institute, in 2017 teachers were paid 18.7% less than comparable workers. Many of these calculations, still, do not take into consideration the strain so many teachers put on their own wallets to purchase classroom supplies.

Last year and so far this year, we have seen a nationwide upswing in teacher strikes. It all started in February of 2018, when West Virginia teachers across 55 counties struck for nine consecutive days. By the strike’s end, they had successfully compelled state lawmakers to grant them a five percent salary raise and better health care benefits, as well as improved teacher qualification laws. Having forged a favorable bargain, West Virginia teachers paved the way for tens of thousands of teachers in Oklahoma, Arizona, Virginia, Kentucky, Colorado, and most recently, California, to act on their pent-up frustration.

As West Virginia teachers first illustrated, casting pay raises as striking teachers’ primary demand would be a glaring oversimplification. Ask teachers why they joined the picket line, and they will undoubtedly describe the wellbeing of their students as their top priority. Students’ education is directly harmed by excessively large class sizes, underfunded districts, overburdened employees, and a lack of support staff like librarians, social workers, and guidance counselors. Strikes may disrupt students’ routines for a week or two, but the interests of teachers are nearly one and the same as those of students and parents.

So, how have the teacher strikes panned out? The majority have been characterized by success, although some state lawmakers have proven less flexible than others. Soon after the West Virginia strikes, 45,000 teachers in Oklahoma took to the streets in an attempt to fight for basic rights that have long been smothered by severe underfunding and negligence. In the last decade, school funding per student has dropped by twenty-eight percent in Oklahoma, with a fifth of schools currently only in session four days a week. In April, state legislators passed a fifteen percent increase in teachers’ salaries as well as a boost in education funding. In the wake of the victory, many Oklahoma teachers, who receive some of the lowest teacher wages in the country, continued to push for more favorable measures.

More recently, strikes have broken out this past January in Los Angeles, home to the second largest school district in the US. Although California is often considered one of the country’s most liberal states, teachers’ grievances there closely resemble those of teachers in other states. Perhaps most concerning to LA teachers is the ballooning of class sizes. All too many teachers have reported classes brimming with upwards of 40 students, conditions which severely inhibit the quality of instruction and overburden teachers. As for educational investment, California’s per-pupil spending has declined significantly, ranking 41st nationally.

The Los Angeles strike was a triumphant success: the district agreed to limit class sizes, give teachers a six percent raise, employ more extracurricular staff, devote 403 million budget dollars to schools in the coming years, cut down on unnecessary standardized testing, and even work to make school campuses greener. The beneficiaries of Los Angeles teachers’ collective action are sure to include hundreds of low-income families, who make up much of the public schools’ enrollees.

The rise of teacher strikes over the past year has revealed that despite the vital role teachers play in our society, they are overworked and underappreciated. They pursue teaching because they have an affinity for educating kids, yet the conditions they work under have forced them to focus on dozens of other concerns. Earlier this year, President Trump floated the idea of arming teachers with guns, yet another measure that would have saddled teachers with an unnecessary and unwelcome burden. It’s past time America start granting teachers the respect they deserve, because when teachers can’t teach, students can’t learn.