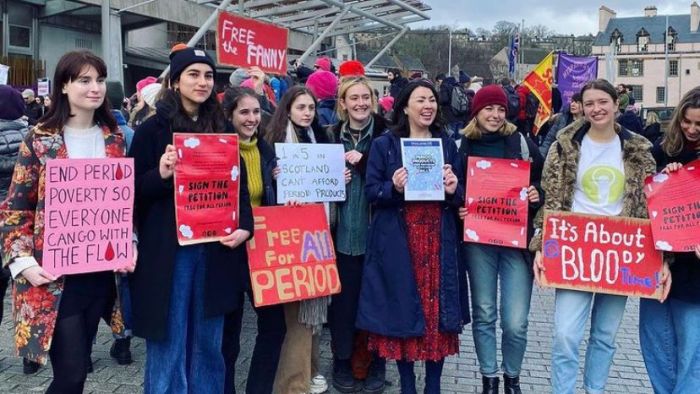 Scotland is currently  being praised for officially becoming the first country in the world to allow free access to period products for their female citizens. The groundbreaking legislation was passed with a unanimous vote after the draft bill was initially approved in February earlier this year. The nation and foreigners all over the globe are applauding Scotland for its reformist attitude and its pioneering efforts to move towards gender equality.

Scotland’s Parliament was highly motivated to move this bill forward to end “period poverty,” which has only been worsened by the pandemic.  According to the BBC, period poverty is “when those on low income can’t afford, or access, suitable period products.” Considering the average period lasts five days, it can cost up to 8 pounds a month for tampons and pads. Nearly three years ago, Young Scot Corporate conducted a survey with over 2,000 women and found that one in four women struggled to gain access to period products in Scotland. All of these women were students at either a school, college, or university.

The study caused the Parliament to realize that while many schools, colleges, and universities were promising to make their student’s health and safety their number one priority, they had been neglecting the needs of female students.. Many institutions either failed to offer diva cups, tampons, or pads/sanitary napkins for their female students at work or charged women for those sanitary supplies. Things changed when Scotland chose to provide free sanitary products to those students through a newly funded government program. Inspired by Scotland’s efforts, Wales and England created similar programs last year.

After the bill passed, Monica Lennon, a Scotland native and the lawmaker who introduced the bill last year, proudly exclaimed, “The campaign has been backed by a wide coalition, including trades unions, women’s organizations and charities… Scotland will not be the last country to make period poverty history… [this is] a signal to the world that free universal access to period products can be achieved.” Financially, it seems that by 2022, it will cost approximately 8.7 million pounds, given that roughly 20% of women in Scotland hover over or are on the poverty line. After reviewing their financial memorandum, England has launched an initiative to also provide free period products in schools, along with New Zealand.

As an avid tampon user (unlike some others), I wondered if Scotland would be accepting of the many different ways women choose to handle their period. It didn’t take much research to discover that Scotland is indeed planning on making all absorbency levels of tampons and pads, unscented and scented, wing and wingless available. In addition to these conventional disposable period products, Scotland is going the extra mile to provide reusable sanitary period essentials, such as reusable pads and menstrual cups. The variety is crucial, as each woman chooses to handle her period with different products.

With any luck, we can use this momentum and push farther, expanding to far more humane healthcare options and beyond. I also hope that leading nations, such as China and the United States, can follow in Scotland’s footsteps and take action against period poverty or increase access to contraception. I am a proud supporter of the global movement against period poverty, and I hope after reading this, you are too.