The screenshot of the Snapchat story above has ignited international outrage after Jamaica Ponder posted it through a blog post on Wednesday night.

Ziad Ahmed
and
February 1, 2021
in
Campus
Courtesy of AP 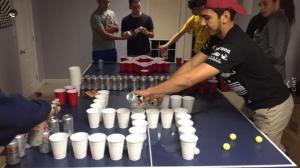 The screenshot of a Snapchat story above has ignited international outrage after Jamaica Ponder posted it through a blog post on Wednesday night. I first read her brilliant piece that very night, and I was shocked that this type of behavior was happening in my town. At a Princeton High School party, students decided to play “Alcoholocaust,” a Jews vs. Nazis beer pong game. The disturbing pastime has perverted rules that include having an “Anne Frank cup” and an “Auschwitz move.” Additionally, one side arranges their cups in a Star of David and the other in a Swastika, as depicted by the picture. It genuinely disgusted me that anyone would want to play such a vile game. You can learn more about the story here or on over 70+ news sources: http://www.nydailynews.com/news/national/new-jersey-high-schoolers-play-jews-nazis-drinking-game-article-1.2592680.

Redefy unequivocally deplores the horrifying anti-semitism displayed by that game. Too often people believe that we live in a post-racial society, but this event is a brutal wake up call to the state of our reality. Everyday, people are bigoted in the name of humor, jest, and immaturity, and it cannot continue. Anti-semitism is not a joke. Anti-semitism is a real, horrible, and prevalent form of hatred that we must oppose fiercely. Furthermore, it is truly repulsive to in any way downplay the severity of the Holocaust. Over 11 million people died in the Holocaust, over 6 million of whom were Jewish. Just last week, my heart hurt after hearing a Holocaust survivor recount her story to my school. The pain of the Holocaust, anti-semitism, and all forms of injustice are too profound to ever be overlooked. It will never be funny to play games about genocide, especially in a world where hatred still runs so rampant.

We can only grow as a society when we confront past, present, and future realities with thoughtfulness. Redefy is a Princeton-based, teen, and preeminent organization working to further equality and to end all forms of discrimination. It is deeply upsetting to us that this type of nonchalance towards such ugly forms of prejudice are still apparent in our community. However, we strongly believe that we can come away from this story renewed in our efforts to create a community characterized by acceptance, equality, and understanding.

We commend Jamaica Ponder for having the bravery to expose this story so unapologetically, and for standing firm in her advocacy of justice. It is not easy to be an upstander, and to do the right thing over the popular thing, but it is how we progress as a world. Her remarkable blog post has drawn international attention, and rightfully so. This is a story that is as horrifying as it is important. This global conversation is necessary in terms of how we oppose bigotry, responsibly use social media, make decisions as teenagers, and generally respect one another.

As we hope to learn from this incident, we echo Jamaica Ponder’s exclusive quote that she has given to redefy that is below:

“I believe that the community has the ability to take this and utilize it as a teaching moment. I know right now it hurts and it's not a fun topic to focus on, but it's important that the issue is properly addressed. That being said, I am confident that groups and programs such as Redefy and Corner House will work alongside the school to take this ugly thing and apply it as something to make our community a stronger, more unified place.”