On Dec. 9 Starbucks employees at a location in Buffalo, New York voted 19-8 to unionize and the National Labor Relations Board certified this result on Dec. 17, forming the first Starbucks union in the United States since the 1980s.

Elizabeth Jones
and
January 10, 2022
in
Wealth Inequality
Courtesy of the Associated Press 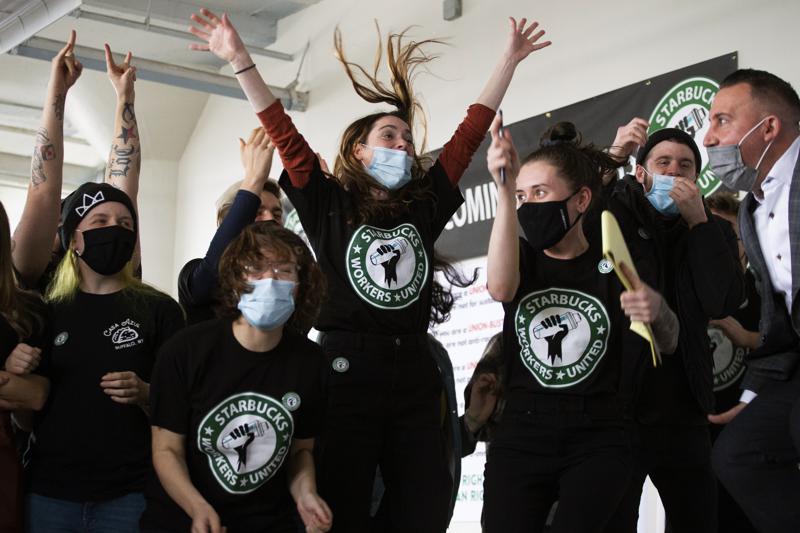 On Dec. 9 Starbucks employees at a location in Buffalo, New York voted 19-8 to unionize and the National Labor Relations Board certified this result on Dec. 17, forming the first Starbucks union in the United States since the 1980s. Also on Dec. 9, two other locations in Buffalo held a vote to establish a union; one store voted against it and the results of the other remain unclear due to some ballots having been challenged by both sides and placed under review. A total of 78 ballots were counted between the 3 locations. The Starbucks location that did vote in favor of forming a union, the store on Elmwood Avenue in Buffalo, has joined Workers United, an affiliate of Service Employees International Union. Employees watched the votes get tallied via Zoom and began hugging and jumping as they cheered, some even chanting “Elmwood! Elmwood!”, after they saw that the pro-union workers held the majority.

Starbucks employees began efforts to create a union in August, seeking higher pay and better working conditions. One location, in Victoria, Canada, already had a union; it was formed in August, 2020 and was the only current Starbucks union until the certification of the union at the Elmwood Avenue store in Buffalo. Labor unions, which allow employees to negotiate the conditions of their employment with the higher-ups of their corporation, are legal in the United States under the National Labor Relations Act of 1935 as a way to protect workers. Despite this legality many employers try to prevent unions, often through bribes or scare tactics. However, it is illegal for employers to interfere with union campaigns. The Protecting the Right to Organize Act, passed by the House in March and currently in the Senate, would toughen punishments for employers trying to dismantle union efforts.

Allegedly, Starbucks attempted to stop a union from being formed by sending several managers and executives to Buffalo to discourage unionization efforts, which included them sending texts telling baristas to vote “no”. Workers United claims that this became “bullying and intimidation” and has filed an official charge with the labor board. Starbucks denies these accusations and has stated that executive team members were sent to Buffalo to address employee concerns and solve operational issues. Howard Schultz, former chairman and chief executive officer of Starbucks and current largest individual shareholder of the company, visited Buffalo in November to meet with company baristas. During this meeting he said that, without needing to push for it, employees have received benefits like health insurance and online college tuition. That is in line with recent statements from Starbucks’ spokespersons, who have claimed that a union will complicate the coffee chain’s ability to quickly address employees’ needs and that the concerns raised are not enough to make a union necessary.

“We acknowledge there are some great benefits [at Starbucks]. The main issue is we don't have a voice. There's no accountability when we do have a problem,” Will Westlake, a Starbucks employee at a Buffalo location without a union, told BBC. In addition to being frustrated with how Starbucks has handled the Covid-19 pandemic, claiming that their health has been compromised for productivity’s sake, Westlake and other employees have voiced concerns of being overworked because of high customer demand and worker absences. Additionally, they are advocating for better training, higher wages, a steady wage increase for employees who work for the company long-term, and more input on store operations.

Michelle Eisen, a Starbucks employee of 11 years, said to the Washington Post, “It’s an industry that deserves good working conditions and a liveable wage.” Eisen has also said, according to an article from the BBC, that even though the pandemic has acted as a catalyst for bad working conditions, they began to decline beforehand, and that she makes $1.20 more than new hires despite having over a decade of experience.

Starbucks did attempt to stop or delay the vote for a union by claiming that all 20 Buffalo locations needed to come together as one to vote for a union. Federal labor officials disagreed, saying each location is autonomous enough to lawfully undergo separate store votes. The company also has a history of stopping unions, including ending union efforts at locations in New York and Philadelphia. In fact, in July a judge found Starbucks guilty of violating labor law by retailiating against two baristas involved in the union attempt in Philadelphia. However, the National Labor Relations Board did confirm that Starbucks did not try to fight the Elmwood location’s pro-union decision. After the union was certified, Starbucks North America President Rossann Williams said in a letter, “This means we will bargain in good faith with the union that represents partners in the one Buffalo store that voted in favor of union representation. Our hope is that union representatives also come to the table with mutual good faith, respect, and positive intent.”

Even though this is only one store unionizing, it is predicted to be a historical event. Some Starbucks locations, represented by United Food and Commercial Workers, briefly had unions in the 1980s; about 1,000 people who work for Starbucks kiosks in grocery stores are still union members, but they are not direct Starbucks employees. This union in Buffalo, however, is believed by most labor activists and even labor force experts to be special because it is the first Starbucks union in the United States for decades and it is happening at a time that the workforce is changing because unions are growing in popularity. “Companies engaged in unfair labor practices with increasing frequency from the 1970s onward, including firing organizers, holding mandatory anti-union meetings, and hiring replacement workers during strikes,” said the director of the Future of Work Initiative at the Aspen Institute, Shelly Steward. Recently, however, several large corporations are facing union efforts, including John Deere, Kellogg’s, and Amazon. Approximately 40 workplaces across the nation have gone on strike since Aug. 1, double the amount from this time last year, according to the Bloomberg Law’s database of work stoppages. New data from Gallup also indicates that 68% of Americans support unions, which is the highest rate of union approval since 1965.

Unions are increasing because of higher company profits, a current labor shortage, and the pandemic. Many companies are making more money than ever before, but not increasing wages; for instance, John Deere has made $4.7 billion as profit already this year, setting a new company record, causing some employees to feel that the company is keeping higher wages from them. There is also a tight labor market, so many workers feel that there is little risk in going on strike or joining a union because they know that they will be hard to replace. Furthermore, the Covid-19 pandemic has made many people who never stopped working, potentially risking their health, feel that they were not rewarded by their employers for their sacrifices. “Essential workers are tired of being thanked one day and then treated as expendable the next day,” Liz Shuler, president of the AFL-CIO, said in a speech during October. Unions also feel like they have government support because left-wing politicians such as Senator Bernie Sanders, an independent from Vermont, have voiced their support.

The Starbucks union is being viewed in a special light because it is expected to increase the number of laborers in all fields across the country organizing unions even more, due to the company’s high profile. “We saw this in 2018 with teacher strikes. They began in West Virginia; they quickly spread to North Carolina, Arizona, Oklahoma, and other states,” explained Johnnie Kallas, a PhD candidate at Cornell’s Industrial and Labor Relations School, during a panel on Dec. 9 before the votes for Starbucks’ union were counted.

It also sets a precedent for the food and leisure sectors of the workforce, allowing those workers to feel like they have the same power to unionize as other laborers. “My dad is in the teachers union, but I had only ever really associated unions with teachers and nurses and mainly construction workers in the building trades… But then the more I learned about it, the more I thought, ‘Why not?’ There’s no reason that baristas shouldn’t get the same benefits and quality of life that other workers do,” Casey Moore, a Buffalo-based Starbucks barista, said during the pre-vote briefing.

As of Dec. 20, additional Starbucks locations in Buffalo, Mesa, Arizona, and Boston, Massachusetts have already begun the first steps to try organizing their own unions. Starbucks Chief Executive Officer, Kevin Johnson, has said that he now expects more stores to unionize. The director of Cornell University’s Industrial and Labor Relations Buffalo Co-Lab, Cathy Creighton, called this an “incredibly momentous occasion for working people in America” and Kallas added that it “could inspire a lot of workers across the country in a low-unionized sector to fight for union rights.”