The writers reduce real trans women and athletes into caricatures and portray them as weaponizing their identity. 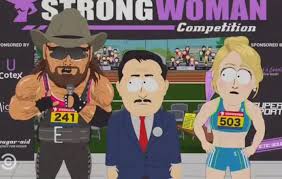 A recent South Park episode, featuring the issue of trans women in sports, is lazy and transphobic.

South Park, notorious for its crude and offensive humor, caters to an audience made up of mostly 30 to 40-year-old cishet men. Coincidentally, the episode in question aired on the start of Transgender Awareness Week.

In the episode, a Randy Savage-like character (a professional wrestler) competes in a Strong Woman weightlifting competition. The punchline? The character’s name is Heather. As a “trans woman,” Heather Swanson claims she only started identifying as female a few weeks earlier in order to compete.

“I’m not here to talk about my transition, I’m here to kick some f***ing ass,” Swanson says. She later goes on to win the Strong Woman competition. Yet, it is ultimately revealed that Heather is an ex-boyfriend of a participant in the competition and competed out of revenge over a bad break-up.

The creators, Matt Stone and Trey Parker, have since been called out for transphobia. “This isn’t their first explicitly transphobic story line. It won’t be their last. Stone and Parker are transphobes. Write them off. Ignore their lazy show,” tweeted Dr. Rachel McKinnon, a Canadian trans athlete and activist.

Many viewers weren’t surprised by the content of this episode. South Park’s history of transphobia started as early as 2005, with an episode, featuring a transitioning teacher, titled “Mr. Garrison’s Fancy New Vagina.” It’s clear that after all these years, their jokes haven’t changed.

The Comedy Central show has perpetrated transphobic stereotypes and reinforced insulting depictions of trans people for years. By depicting a weightlifter “transitioning” solely for revenge and to win a competition, the writers reduce real trans women and athletes into caricatures and portray them as weaponizing their identity. This episode wasn’t an attempt to create a conversation on the treatment of trans athletes; instead, it was actively hateful and blatantly transphobic. The show has been renewed for 2020, so the best we can do is ignore their offensive “comedy.”