Social Media Activism: A Trend or Here to Stay?

With a surge in social media-based activism, many find themselves promoting things for the sake of fitting in, rather than researching current events and becoming knowledgeable on important topics. 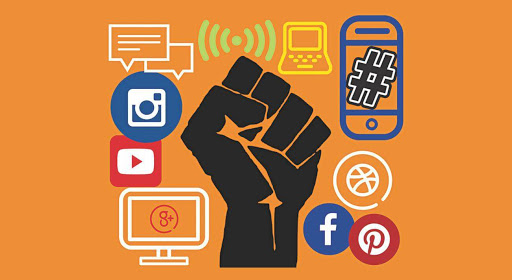 Over the past few weeks, in the wake of the appalling deaths of members of the African-American community like George Floyd, Breonna Taylor, and Ahmaud Aubery, many teens have taken to social media to inspire change. With this surge in social media-based activism, many find themselves promoting things for the sake of fitting in, rather than researching current events and becoming knowledgeable on important topics.

Now more than ever, social media activism is an extremely common and constructive way for teens who aren’t able to go out and protest injustice to still actively promote their support for a cause. For example, around almost one year ago, many social media influencers began changing their profile pictures to a canvas of blank blue to express their support for protesters killed in Sudan. Similar to this, #blackouttuesday recently became a trending hashtag on all social media platforms as support for the Black Lives Matter movement after the death of George Floyd.

The #blackouttuesday tag came to be when two prominent black women in the music industry, Jamila Thomas and Brianna Agyemang promoted the tag #TheShowMustBePaused on platforms like Instagram. While this campaign started as a way to promote resources relating to the BLM movement, it eventually dissolved into #blackouttuesday, where many influencers posted a black square to express their solidarity—and nothing more.

Rather than helping the movement, #blackouttuesday only promoted one of the biggest flaws of social media: ideology tourism and performance activism. Not only did this allow for many to participate in performance activism (an empty gesture with no concrete action), but it also distracted users from crucial material posted on social media about the protests—from video evidence of police brutality to tip sheets outlining safe protest practices. Many creators benefit from such ideology tourism as they gain followers everytime they decide that a movement is worth posting about, even if they haven’t done anything to support it. Ultimately, the efficacy of social media activism in terms of racial justice is questionable; however, social media does have its merits.

As seen by how quickly social media users piggybacked onto the #blackouttuesday tag, it’s evident that social media is very efficient at spreading trends, and spreading them quickly. This can also prove to be a massive benefit, especially when it comes to allowing scenes of injustice go viral. When it came to making the cops that killed George Floyd pay for their actions, the swiftness of petitions and emails sent to Minneapolis officials can be attributed to the use of social media. As with recent situations, we’ve seen that social media is able to document actions that often elude traditional media outlets, and these networks are able to facilitate quick action when it comes to signing petitions and sending out emails.

Social media, then, is a great outlet to push for swift change, but it’s unlikely that any long-term action can be taken on platforms where the focus of information changes by the second. While people may start out with the right intentions, like we saw with #TheShowMustBePaused, their burst of eye-catching activism often devolves into hashtags and blank Instagram posts with no action.

As journalists and budding social and political activists, how can we move away from the hashtags and use social media to engender real change?

First, we can create an environment of activism that tolerates imperfections, especially among users who have just begun voicing their desire for racial justice. Cancel culture, for instance, where in some cases one mistake or transgression has the potential to expose its creator to grave criticism, can often serve to promote intolerance in social media communities.. Rather than ‘canceling’ a well-intended individual for making a mistake, we should help them learn from their actions while appreciating their initiative. It’s important that as budding social media activists we help others learn how to engage in social advocacy and encourage all allies’ efforts at activism and awareness.

Second, we can make sure to educate ourselves and post credible information. Racial justice is a real issue and has impacted many people, so let’s support the voices of people who have been affected most by it and amplify their voices, giving their point of view the attention it deserves.

Next, we can change the language we use when spreading information, as language can change the way readers arrive at a conclusion about a photograph or a story. The passive voice is used by writers to diminish the actor in a sentence, failing to place the responsibility of racial injustice and anti-racist action alike on its subjects. By using the passive voice when talking about protests and police brutality, we do not hold the people who committed the violence (in this case the police) accountable for their actions. The solution? Active voice! Never hesitate to convey your ideas explicitly and boldly.

Finally, we can make sure to continue this activism. Ideology tourism, as mentioned before, happens a lot in social media politics, where people stick to an ideology because it’s popular. It’s important that as activists, we continue to stick by what we believe in and continue to push for change. Nonetheless, don’t hesitate to take a break from activism (both on and off social media) if you need a break—in order to achieve respect for others, we must maintain respect for ourselves.