Eshaan Mani
and
September 12, 2021
in
Health
Courtesy of Al Jazeera 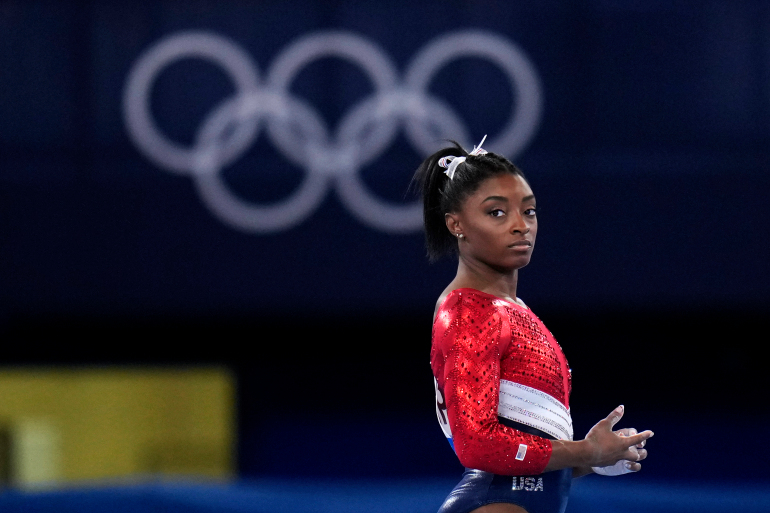 Breathing heavily, Biles stepped up to perform the all-around during the qualifying rounds of the Tokyo Olympics. Bouncing off her floor landing, she stumbled. The crowd gasped and a sinking feeling overtook the Ariake Gymnastics Center. Even so, she still placed first.

Again, in the warm-ups for the first rotation of the team final, Biles stumbled. She only performed 1.5 twists instead of the expected 2.5, with a lunge and near-fall on her landing. Scoring only 5.0 out of 5.8, she left the room, later returning to withdraw from the rest of the team competition.

She said her decision was motivated by mental health concerns and was inspired by Naomi Osaka, a fellow Olympian, who had withdrawn from competing in the French Open and Wimbledon for similar reasons. Team USA went on to win the silver medal behind the Russian team, which Biles cited as a cause of anxiety. She later withdrew from the individual all-around competition, vault, and uneven bars finals for similar reasons. USA Gymnastics said, “she will continue to be evaluated daily to determine whether to compete in the finals for floor exercise and balance beam." Her decision to withdraw from these events both shocked the world and drew an outpouring of support.

The mental health of athletes is a less discussed but extremely important topic. Biles experienced the “twisties,” a mental block affecting physical performance.  According to the BBC, the twisties, which can happen to anyone, even the most experienced gymnast, can cause someone to lose their sense of space and dimension as they’re in the air. This leads to a loss of control over their body. That’s likely why Biles performed fewer twists and lost her balance. In some cases of the twisties, gymnasts may find themselves unable to land safely on the floor. The harder you try to resist the twisties, the harder they push back.

There have been several athletes who have suffered from the twisties at the Olympics, including Claudia Fragapane, a British artistic gymnast who fell on the balance beam in Rio in 2016. She again fell in April of 2020 following a mental block; the resulting head injury caused her to miss the cut for the individual all-around final in Tokyo.

Fragapane, 23, said she could “understand exactly how Simone was feeling. [Biles] has got a lot of weight on her shoulders. Everyone thinks that she is just going to be absolutely out of this world and perfect and she’s not human. But actually, she is human, and I think the pressure just got too much.”

Biles said that the support she has received “has made me realize I'm more than my accomplishments and gymnastics which I never truly believed before."

The occurrences of last week have also brought a serious topic to the forefront of discussion: the mental health of elite athletes, especially those who identify as Black. Biles is one of the many athletes who have felt the weight of massive Olympic expectations on their shoulders, and she was embraced as the latest elite athlete who was brave enough to acknowledge her vulnerability.

Sian L. Beilock, the president of Barnard College in New York and a cognitive scientist, said: “I applaud the fact she was able to ascertain that she wasn’t in the right state of mind and step back. What a hard thing to do. There was so much pressure to continue. And she was able to find the strength to say, ‘No, this is not right.”

Biles has had quite a year. As the face of the Summer Games for NBC, she grew in public notoriety and was pushed by corporate sponsors, fans, and the news media. She also was a leading voice against sexual abuse, as she spoke out about the crimes of Lawrence G. Nassar, the former doctor for the United States women’s gymnastics team and Michigan State University athletics. It’s clear that Biles has been through a lot and deserves a mental health break.

Due to the pandemic, elite gymnasts like Biles were affected by a lack of access to gyms, coaches, and national training camps. In May, she competed for the first time in 18 months, and she performed in front of a sparse crowd in Tokyo without the raucous cheers she’s used to. The lack of regular competition and practice, according to Nancy Hogshead-Makar, the winner of three gold and one silver medal at the 1984 Los Angeles Olympics, is the equivalent of a muscle atrophying.

Biles’s decision to withdraw has placed her at the forefront of a growing number of young Black female athletes who are prioritizing their mental health and personal agency above societal and cultural expectations. This group includes Naomi Osaka and Simone Manuel, a gold medalist in the 50- and 100-meter freestyle who shared last month that she was suffering from overtraining syndrome and depression.

Manuel, 24, was the first Black American to win an individual swimming gold medal. She cited the stress of training, the postponement of the games, and most importantly, the recorded brutalization of Black people in America as a cause of irritability, appetite disruptions, fatigue, and drained mental and emotional reserves.

“The experience of Black women being in pain that’s unacknowledged is a common one,” said Inger Burnett-Zeigler, a clinical psychologist at Northwestern University’s Feinberg School of Medicine. “The pain is there despite still performing with excellence. The fact that they can name it and attend to it is liberating people from carrying it in secret.”

For athletes themselves, it’s especially liberating to see these women prioritize their mental health. The alternative, shaking it off, doesn’t work too well. Data from the International Olympic Committee has shown that 35 percent of elite athletes suffer from a mental health crisis, which could result in stress, disordered eating and other symptoms outlined by today’s top athletic stars though few seek help.

Among their Black peers aged 18 to 25 in the nation, major depressive episodes have increased from 6.1 percent to 9.4 percent between 2015 and 2018, according to Mental Health America. Yet, the percentage of Black adults over 18 who receive treatment for these episodes lags far behind their White peers, according to data from the U.S. Department of Health and Human Services Office of Minority Health. Black women and White women over 18 reported a higher percentage of feeling extreme psychological distress compared to men of the same respective race in 2018.

Andrea S. Boyles, associate professor of sociology and Africana studies at Tulane University, is glad that the stance that young Black female athletes have taken on mental health unravels historical prejudices and constraints commodifying Black women as tools for others.

“It’s refreshing to see that good, bad or indifferent, for these Black women to be able to explore and breathe and take time to tend to their own existences,” she said. “Whether they meant for that to be the case or not; they are taking time for themselves.”

Biles’ momentous decision is making positive waves and the support she has received is well-deserved. We look forward to seeing her compete in the future, but her mental health always comes first.