Vasco Vidal
and
October 11, 2020
in
Activism
Courtesy of Vox 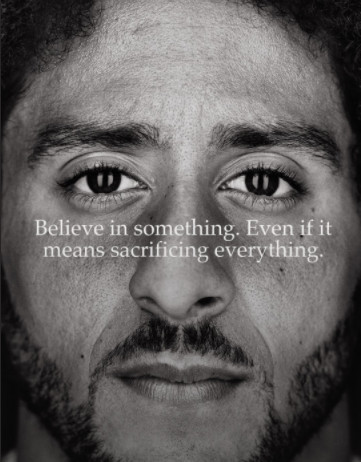 Kaepernick sought to inspire and mobilize viewers to dream big, and not be afraid to pursue their goals, as implied by the slogan, "Believe in something. Even if it means sacrificing everything. Just do it." The ad won the award for "Outstanding Commercial" at the Creative Arts Emmy Awards, as well as the admiration of many athletes; at the same time, however, many disapproved, including a number of prominent politicians.

It was clear that Nike supported Colin Kaepernick and his role as the man who’d started the National Football League (NFL)’s silent kneeling protests during the national anthem - a move that was a hot subject of controversy at the time.

Following the release of Nike’s ad, other large brands such as Gillette, proceeded to promote political positions in their marketing, as if the floodgates had opened. The campaigns of these brands were largely successful. For example, Gillete’s ad campaign called “We Believe in the Best in Men” called for men to renounce the idea that “boys will be boys”, and to stop embracing the societal norm of traditional sexist behavior. The commercial was controversial, but ended up receiving the praise of many, such as civil rights activist Bernice King, who described the ad as being “pro-humanity” and demonstrating that society can change for the better if we take steps in the right direction.

Lisa Parfitt, Managing Director of Synergy Global, said, “Nike is marketing to a new generation who care about the world – they want to change stuff, rid society of injustice and inequality, and will happily climb on board with a brand that shares that purpose. It’s passion-powered marketing – Nike not only taps into the passion for sport but also contentious socio-political issues that can evidently compel Gen Z to vote with their feet.”  The Nike campaign has started not only a new era of sports marketing but a new form of marketing to attract a new generation with different ideals than others.

In the midst of the tremendous resurgence of the Black Lives Matter movement in 2020, several American brands have spoken in favor of the cause, such as L'oreal, Old Navy, and Skittles. They are promoting political messages that advocate for universal human rights, like equality and justice- messages that reach and impact millions. By taking political stances, these brands can inspire people to take action, and even more importantly, they can introduce new ways of thinking to uninformed customers. For example, consider a woman who does not have social media, and who forms all her political opinions from a single television channel- when she sees a commercial like Nike's at a sporting event, she may realize that there are people who think differently from her and that there is an alternative that she had never even considered.This may lead her to looking further into the issue, and to get involved in a cause.

More than ever, it is necessary that people who have been indifferent to systemic racism due to political polarization reflect and rethink their ideas as Election Day is just around the corner, and ballots are already in millions of households around the United States. Voting gives you the power to push for improvements in not only your life, but also the people you care about, people you may have never met in and may never meet in your life, and future generations. It is a way to voice your opinion and stand up for issues that you find important. If more brands can get involved in the political scene and share messages in favor of equality and justice, the U.S. would undoubtedly change for the better, as the power will return to the people. We can urge our politicians to address today’s pressing issues, and work towards a country where no one is less than another because of who they are.

Still, it’s important to remember that some brands adopt certain views to not necessarily to promote their ideologies, but as a marketing strategy to satisfy and appeal to consumers who demand that these brands use their platform to spread messages that they believe are just and important. This appeasement-driven social marketing is made clear when analyzing whether or not they have taken further measures to support whatever cause they speak of, perhaps by donating and sponsoring efforts in line with the cause.

Brands conduct market studies before publishing messages of support to a movement to ensure that this will not have a negative impact and cause them to lose money.  For example, in the case of the Nike ad, the brand suffered from a boycott at first- many burned their Nike products and claimed they wouldn't buy Nike again.

Then again, Nike proceeded to earn $6 billion in the aftermath. Online sales jumped by over 30% percent in a matter of days after the ad’s release, suggesting a direct causal relationship.

It is, more often than not, beneficial for brands to spread these crucial messages, following in Nike’s footsteps. At the same time, they shouldn’t be glorified (or hated) for spreading the messages they do- it may be just a marketing strategy to appeal to whatever their customer base is. When a brand voices support for a cause, take the time to read up on the steps they’re taking to support it- actions matter a lot more than words. Don’t just commend them for calling something out- call on these brands to commit to and document concrete steps of progress towards whatever cause they’re standing behind.

And if you don’t like their message? Your wallet is your vote!