Analysis and reflection: on April 12, 2022, a gunman wearing a gas mask set off smoke grenades and fired 33 bullets inside a subway train in Brooklyn, NY. TRIGGER WARNING: Contains details on shooting.

Eshaan Mani
and
April 29, 2022
in
Guns in America
Courtesy of ABC News 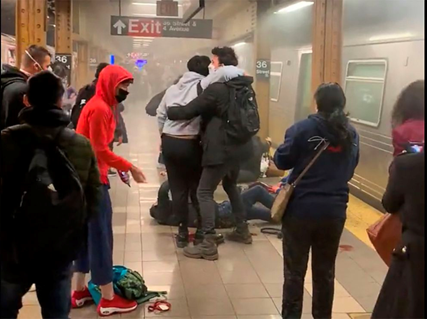 On April 12, 2022, a gunman wearing a gas mask set off smoke grenades and fired 33 bullets inside a subway train in Brooklyn, NY. The gunman threw two smoke grenades to the floor from the train’s second car and began firing a Glock 9 mm semi-automatic handgun. The shooter’s gun jammed up and kept him from firing more, but enough damage was done. Fire officials said they had taken 17 victims, including those with gunshot wounds, from the scene of the subway attack to local hospitals. Five were reported to be in critical but stable condition. Others arrived at those facilities on their own.

The scene authorities encountered was less of a typical morning commute scene and more like something out of a horror film: screaming riders running through a station with bloodied bodies lying on the platform while some administered tourniquets to staunch bleeding.

Those who experienced the shooting didn’t realize it was a shooting to start with.

Yav Montano was inside the carriage during the attack; he said the gunfire “sounded like firecrackers or a bunch of scattered popping.” Others say they lost count of how many bullets were fired.

Chief of Detectives James Essig said police found the weapon, along with extended magazines, a hatchet, detonated and undetonated smoke grenades, a black garbage can, a rolling cart, gasoline, and the key to a U-Haul van.

Four tipsters identified Frank R. James as the prime suspect for what was declared "the worst attack on the New York City subway in decades.” James rented the U-Haul van found at the scene in Philadelphia and has addresses in Philadelphia and Wisconsin.

James’ YouTube channel is filled with Black nationalist rhetoric, violent language, and bigoted comments. For days, James was on the loose. But soon, he was in New York Police Department custody.

New York is a city on the mend from serious crime, growing weary of gun violence issues. Just earlier this year, several gun-related attacks occurred across the city’s boroughs. Mayor Eric Adams, a Democrat barely over 100 days into his term, has cracked down on crime, especially in subways, and pledged to send more police officers on patrol into stations and platforms.

The mayor, who is isolated following a positive COVID-19 test on Sunday, said in a video statement that the city “will not allow New Yorkers to be terrorized, even by a single individual.”

At an event in Iowa, Joe Biden said:“We’re not letting up until we find the perpetrator.” He thanked first responders and kind civilians who stepped up to help in the wake of the attack.

American cities have seen a troubling rise in gun violence incidents over the past several years. This attack is just another testament to the need for a more open dialogue about personal arms in this country. Gov. Hochul put it best:

"This insanity that is seizing our city has to stop. We say no more. No more mass shootings. No more disrupting lives."