Serbia's Protests Could Usher in a Decade of Change

In Serbia, COVID-19 was the final straw, pushing widespread dissatisfaction into protests and calls for revolution against a corrupt government has attempted to capitalize on the health crisis to advance their political agenda. 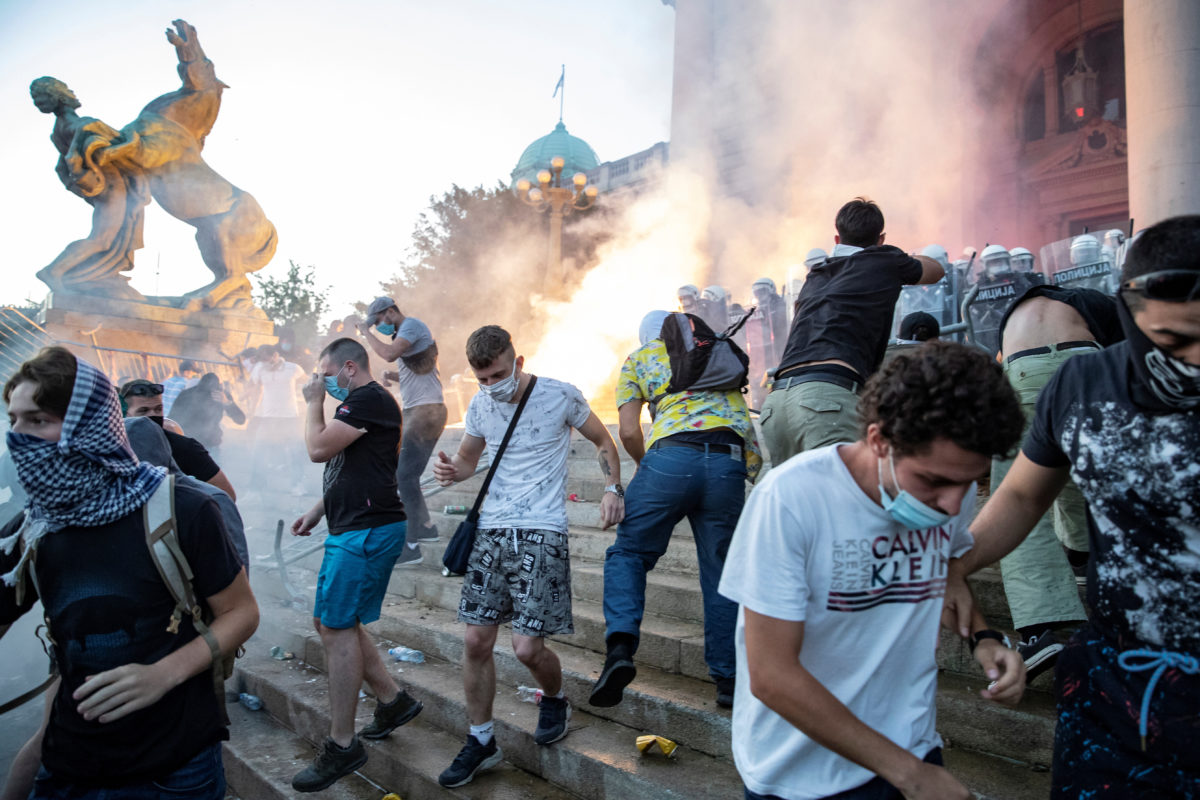 Around the world, COVID-19 has placed enormous pressure on citizens’ relationship with their governments. In Serbia, though, the pandemic’s disruption was the final straw, pushing widespread dissatisfaction into protests and calls for revolution against a corrupt government has attempted to capitalize on the health crisis to advance their political agenda.

Serbia has a history of self-serving government corruption, manifesting itself in the form of severe opposition and media suppression. After Yugoslavia was dissolved in 1992, instability in the region has pitted citizens against the government, notably culminating in the ousting of authoritarian Serbian leader Slobadan Milosevic as recently as 2000. Current president Aleksandar Vucic emerged from the sociopolitical fallout, with a history of militant radicalism and dissenter suppression. Since then, he has played both anti and pro European Union stances whenever it was the popular opinion, demonstrating no loyalty to anything other than power, and strategically gaining support until he was elected president in 2017.

Fast forward to June 2020: COVID-19 is raging, and Vucic is up for reelection. Two weeks before voting, Vucic overhauls all COVID-19 restrictions, transitioning from strict curfews and social distancing to opening up stadium sports and concerts, in order to create the self-serving illusion that the ruling party (himself) had fully overcome the virus. Two catastrophes ensued soon afterwards: a highly fraudulent election, and skyrocketing COVID-19 cases, both of which have caused widespread protesting.

Vucic’s party, the SNS, dismantled every democratic aspect of an election. For previous years of Vucic’s administration, media suppression and anti-opposition propaganda had already been in practice, preventing the public from joining or learning about opposing parties. The SNS infiltrated the electoral committees in charge of local polling stations, who were reported to have telephoned voters and asked them to vote for the ruling party, and voted on the behalf of others through a screen (an ironically convenient COVID-19 inspired setup). Members of the SNS organized transportation to polls for voters, raising questions about whether or not bribes were offered on the trip, and also approached voters on the street on their way to polling stations. Random checks of ballots from various localities found that they differed wildly from what was registered by electoral committee members. Many reports by electoral committees regarding polling station activity were left unsigned- therefore avoiding liability for fraudulent practices by the committee member in charge- which is illegal. In light of all these crooked methods, it’s sadly not a surprise that Vucic’s victory was declared a “landslide.”

Right after winning, Vucic’s administration decided to resume their previous stance and state that COVID-19 was a legitimate threat to public health. The government reinstated harsh curfews and moved students out of their dorms. This abrupt reversal received public backlash not only out of a desire for maintaining social interaction, but also because it exposed how the government viewed the citizens’ health as negotiable when advancing their political agenda. A few days later, investigators revealed that the reported COVID-19 cases and deaths during the two weeks prior to the election were only one third out of the actual totals, exposing Vucic’s blatant falsification of data and disregard for public health. The health system in Serbia was rapidly overwhelmed, after years of deterioration due to government neglect ever since Yugoslavia’s dissolution.

Vucic’s economic policies have reduced the average income of his citizens which, coupled with his continued neglect for a public health system and the majority of available treatment being privatized and extremely expensive, has left many COVID-19 patients are financially helpless. The twist: Vucic blamed the increase in cases on citizens’ “irresponsible behavior.”

In response to such government orchestrated crises, Serbians took to the streets in protest. Starting on July 7, thousands of citizens expressed their outrage for Vucic’s overt corruption and disregard for public health. For a week, the streets of Serbia were filled with violence from both police and the public, exchanging rocks, bottles, flares, and tear gas in the most intense demonstrations since the 2000 revolution. Many suspect that the government planted violent extremists and troublemakers in the protests, destroying property and attacking police, to discourage activism. Although there is no explicit goal or leader of these protests, the general sentiment is a sense of deep injustice and a desire to transcend the now decades-long cycle of corruption and authoritarianism that citizens have paid the highest price for.

After a week of protests, Vucic has switched tactics from denouncing the protests to attempting to placate the public, releasing all detained protesters, discarding the curfew, and announcing that a vaccine will be available soon. Such attempts, however, have been ineffective against the new generation of leading activists, composed of mainly the left-leaning, educated youth. Armed with experience, passion, and education, many activists are beginning to organize a revolutionary movement in full, pursuing a future with well-intentioned, effective leadership and freedom of speech. If they succeed, Serbia may undergo a democratic renaissance and break free from its turbulent past.