Separating a Country From Its Citizens

Why it’s unfair to make people into their countries: blaming citizens for the government and other groups in power is a terrible and un-nuanced way to think.

Kirtu Hariharan
and
March 22, 2022
in
Representation
Courtesy of the Atlantic 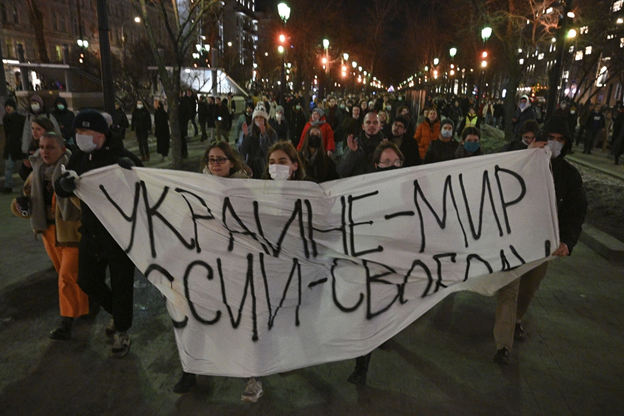 “Demonstrators march with a banner that reads ‘Ukraine—Peace, Russia—Freedom,’ in Moscow on February 24, 2022, after Russia attacks Ukraine”

Russia’s current invasion of Ukraine in the previous Chernobyl site has set the world into a spiral, the attack setting fears into the hearts of people everywhere. President Vladimir Putin’s threat to Ukraine’s democracy is beyond inhumane, making statements blaming the people of Ukraine for this outcome, saying they are the only ones who can stop this vicious war.

As he said on his official website, “What I think is important to emphasize further is that the leading NATO countries, to achieve their own goals, support extreme nationalists and Neo-Nazis in Ukraine, who, in turn, will never forgive the Crimeans and Sevastopol residents for choosing reunification with Russia… Now they also claim to acquire nuclear weapons. We will not allow this to happen. We have been left no other option to protect Russia and our people, but for the one that we will be forced to use today. The situation requires us to take decisive and immediate action.”

Russia was the one who invaded.

But Russian citizens have been protesting against the war. From Moscow to Siberia, these people are begging for peace, angry at these human rights violations. even though police are cracking down on these protests, arresting and detaining several protesters. As human rights activist Marina Litivinovich said in a video, “We, the Russian people, are against the war Putin has unleashed. We don't support this war; it is being waged not on our behalf.” The idea that she is defending is clear to understand: an unnecessary amount of bloodshed in their land and harming innocent people innocent unprovoked is disgusting, to say the least.  The people aren't to blame for these military actions - the government is.

On the other hand, the Russian people are an essential part of the country.  So, can’t they do something to stop this? After all, the people make the government and the government exists to serve the public.

The answer to that question: countries are not people.

Government views on issues often do not represent the public, in contrast to popular belief. We see this scenario in dictatorships or other authoritarian styles of government. Anyone with too much power can deteriorate and hide the voice of strong-willed people.  Why? Lack of resources, propaganda, the ability to enforce laws against those same people...  Take Hilter for example; along with his effective use of propaganda (some even targeted children), ability to silence anyone who opposed him, and the people having a lack of resources to defend themselves, he was able to sweep through several countries and create a mass genocide. The citizens are innocent; however, people from other countries, by looking at their country's actions, do not know what the country tells its population.  This practice of telling their people one thing and doing other things is adopted by the United States when it claims war to protect democracy but intervening with international affairs, which can be linked to oil.

It’s beyond unfair to expect the citizens to be able to convince their government to stop.  Especially since there are so many cases where it hasn’t worked. To illustrate, in America during the Vietnam war, “protests began small among peace activists and leftist intellectuals on college campuses but gained national prominence in 1965 after the United States began bombing North Vietnam in earnest.” (History.com, Vietnam War Protests).   On October 21, 1967, one of the largest protests had about 100,000 people gathering around the Lincoln memorial though hundreds were arrested by soldiers. Several famous songs such as “Alice’s Restaurant Massacre” by Arlo Gurthie, “Imagine” by John Lenon, and Marvin Gaye's “What’s going on” all critiqued the war and the detrimental effect of fighting. As we can see by this part of the song Imagine mentioned earlier, “Imagine there are no countries. It isn't hard to do. Nothing to kill or die for…”

During this war, only 35% of the population approved of the handling of the war, 50% disapproved and 15% had no opinion.

Did the U.S stop?

And let’s not forget the devastating treatment of veterans after they returned. The same people who fought for their country were throwing their medals away in disgrace. War is never clean and there is no true victory when innocent life is lost.

Even the Iraq war was highly controversial. From 2002-2003, Americans had protested the push into Iraq. This can be most aptly remembered by February 15, 2003, when over 6 million people from around the world protested theUnited States’ entry into Iraq. This action did help governments resist pressure from the United Kingdom and the United States to support Bush’s plan; however, until 2007 the U.S did not start pulling troops out of Iraq, finishing the majority of it in Dec 2011 with the end of the Iraq war and then a final pullout of all troops in the US.

As long as there has been corruption and wars, groups will fight it, from the White Rose to CodePinkAlert. But that doesn't mean they will always win.

Sometimes it can go badly for citizens of these countries.  Hate from outside, people expecting citizens to be able to control their governments, and attacks from the government itself, trying to eliminate everyone who opposes them. This scenario can lead to anti-immigration and anti-refugee along with hate crimes. An example of this would be the effects of 9/11 and the treatment of Muslim people and Sikhs across the United States.  A study done by TheWorld.Org proves that there were 481 recorded incidents of hate crime in 2001 towards Muslim people, a massive spike from the 2000s recorded twenty-eight. After that, hate crimes against Muslim people remained over 100 incidents per year up to 2014.

Blaming citizens for the government and other groups in power is a terrible and un-nuanced way to think. Although changes can be made, it's not as easy as it looks in the history books, especially when there are several examples of attempts at government reform/improvement that eventually collapsed. Change does not come easily and demonizing the people who are receiving some of the worst effects helps no one. The only way to make a true difference is to extend support to the people who need it and fight alongside them.