Zachary Garfinkle
and
September 27, 2021
in
Politics
Courtesy of NPR 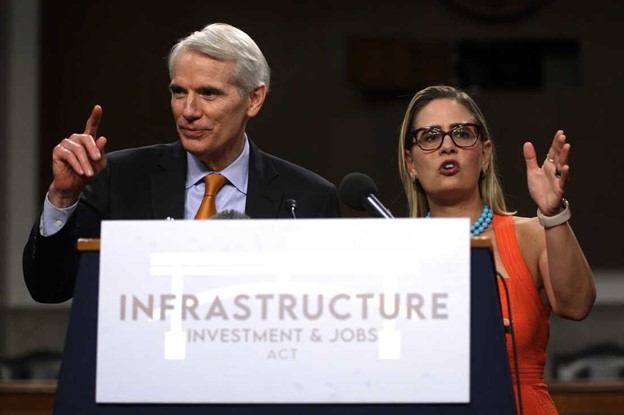 On August 10, 2021, the United States Senate passed an infrastructure bill totaling to $1.2 trillion. Approved at a 69-30 vote, this marks a significant increase in funding for the nation’s infrastructure. The funding will last for five more years, at which point new terms will be negotiated.

The agreed-upon bill came after months of debate. President Joe Biden initially proposed a vast $2.2 trillion American Jobs Plan, which was negotiated down to the final $1.2 trillion plan. The American Jobs Plan covers many of the same areas as the final bill—such as transportation, clean drinking water, airports, and widespread Internet access—but more ambitious. Nonetheless, the final infrastructure bill seems to have the potential to change the lives of countless Americans.

Bolstering national transportation was one of the primary objectives of the bill. A grand total of $110 billion was allocated to the reparation and construction of highways, roads, and bridges. In addition, the bill set a budget of $66 billion to supplement passenger and freight rail. Financial support extends to airports as well; President Biden has previously criticized the state of LaGuardia Airport as that of “[a] third-world country.”

A notable $55 billion will go to ensuring Americans have safe drinking water. The current goal is to replace every lead pipe in the United States—a perhaps idealistic yet certainly well-funded plan. As lead remains in Flint, Michigan’s water supply, 7 years after the incident, this portion of the infrastructure bill marks a legitimate effort to help solve the problem.

The pandemic undoubtedly influenced parts of the bill. If it were not for the COVID-19 crisis, the widespread availability of broadband Internet access likely would not have been nearly as high a priority. The bill promises to expand Internet access across the country, after so much of the workforce faced the need to go virtual. The infrastructure bill is adapting to the future in other ways as well: it has put aside $65 billion to modernize the country’s power grid, and $7.5 billion for electric vehicle charging stations. With many parts of this plan, the United States government shows willingness to prepare for the future.

As global warming worsens, the environment is of great concern. In addition to the electric vehicle charging stations, the bill allocates $47 billion for environmental disasters. Droughts, coastal erosion, wildfires, heat waves, and other climate crises will be potentially less deadly and less economically disastrous as a result of the new emphasis on disaster control and mitigation.

The final bill comprises 2,702 pages of detailed plans to fix the nation’s infrastructural issues. Its passing is a hard-fought success after years of failed negotiations between Democrats and Republicans. The infrastructure bill represents a step forward for President Biden’s “Build Back Better” campaign. Now that the contentious and tense negotiation process has at last come to a close, the United States can begin to heal.