In Salt Lake City, protesters who demanded justice for Bernardo Palacios-Carbajal are now facing additional "gang enhancement" charges and the potential of life in prison

Akash Nayak
and
September 11, 2020
in
Justice
(Courtesy of Rick Bowmer via AP) 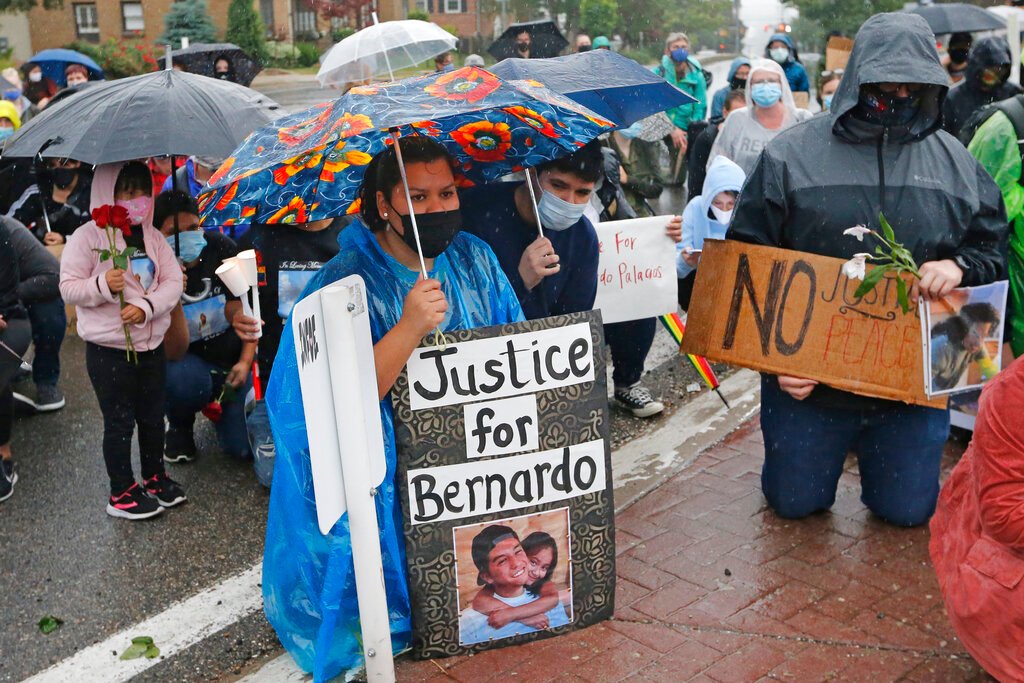 Splatters of red paint stained the walls and covered the sign reading “Salt Lake County district attorney’s office”. Images, reading “Black Lives Matter” and “Justice for Bernardo”, covered the remains of shattered windows on the side of the building. The office in Salt Lake City stood, defaced by both anger and a collective will for change.

This scene took place on July 9th, amid another protest for Black Lives Matter, fueled by the senseless shooting of Bernardo Palacios-Carbajal in Salt Lake City. On May 23rd, 2020, the police responded to a report of someone threatening people with a gun. Once the police arrived at the scene, Bernardo started to run, but ended up dead on the ground after being shot with over thirty bullets. This horrific incident created outrage in the community, outrage that only grew due to the death of numerous other Black Americans, like George Floyd and Breonna Taylor. This rage transformed into a spirit of reform. Citizens of Salt Lake City took this spirit to the streets, exercising their first amendment right to protest. Yet, the protesters’ anger returned when the Attorney General of Salt Lake City, Sim Gill, stated on July 9th that the officers’ use of lethal force was justified by the law. Following this statement, protesters angrily defaced Attorney General Gill’s office.

The vandalism of the building caused damages that are estimated to cost over $100,000. Gill proceeded to charge those involved in the defacement of the building; however, ‘gang enhancement’ was added to these criminal charges. This enhancement provides for the possibility for the defendants to face life in prison for their crimes. The gang enhancement added to these charges led to controversy in the community, with many accusing Attorney General Gill of being overly harsh in his prosecution. According to The Salt Lake Tribune, Gill stands by his choice, arguing that his team thoroughly “looked at the evidence”. Gill’s rationale is based on the evidence that there was more than one person who took part in vandalizing his office. Due to the fact that multiple people played a role, the Utah criminal code’s requirements for gang enhancement is that the action must “offense committed in concert with two or more persons or in relation to a criminal street gang", fits.

However, others in the community have argued that the charges are too extreme. Madalena McNeil, one of the accused, stated that she doesn’t “think any of the allegations against [her] warrant life in prison”. McNeil further explains that the charges against her “send a very extreme message to anyone who’s considering acting out their civil right to protest”. This sentiment was echoed by Salt Lake City Mayor Mendenhall, who tweeted that although “there should be consequences for breaking the law, the potential to spend life in prison for buying paint is too severe”. Both McNeil and Mayor Mendenhall explain that the potential punishment of life in prison for vandalism is unjustifiable. A lawyer from the American Civil Liberties Union has stated that the gang enhancement added to the charges leads to “calling participants in a protest gang members," because the vandalism of the building was committed as an act of protesting. This severe punishment may also discourage many citizens in Salt Lake City and around the country from protesting out of fear of receiving harsh punishments for no sane reason.

Though everyone who breaks the law should be held accountable, their punishment must be proportionate to the crimes committed. Even though the counter-argument reveals how the addition of gang enhancement (and the subsequent potential of serving life in prison) may be legal, this reveals an issue in the criminal justice system. If the law allows for people to be jailed for life because they committed a non-threatening crime, such as property damage, with the help of multiple people, then the law is not punishing proportionally to the crime. Another issue with this case is that Attorney General Gill’s office filled the charges even though they were the victim. Gill claims that his office handled the filing of charges due to short staffing caused by COVID-19; however, being both the victim and the prosecution is an undeniable conflict of interest since he was directly affected by the crime. These logistical legal issues are salt in the wound of Salt Lake City, which was attempting to heal from the shooting of Bernardo Palacios-Carbajal and amend the racist practices in the policing system.