Fighting for these flags does not make us un-American. It is how we live up to this nation’s true intended spirit and is how we uphold an America that strives for equitable social change

Isabelle Nunes
and
March 9, 2021
in
Activism
Courtesy of Lee Jin-Man via AP 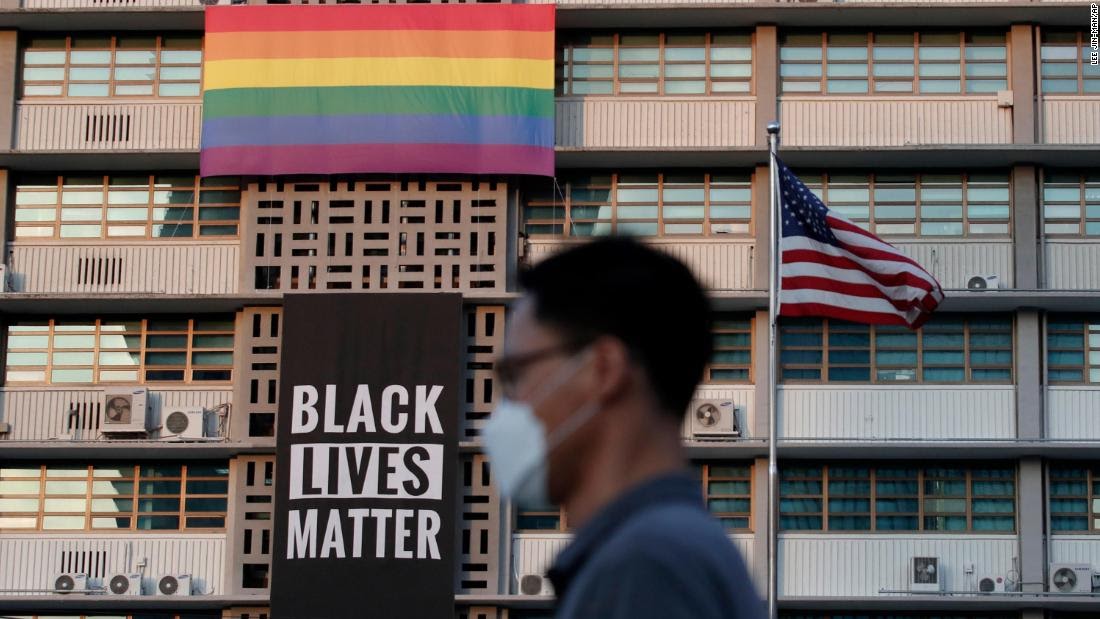 The freedom of speech, and the right to free expression.

These two liberties remain undeniably at the core of American values, especially as they pertain to symbols of community and equality. Yet, those very values are being threatened in a bill that would prevent pride flags and Black Lives Matter flags from being flown at U.S. embassies worldwide.

Supported by United States Representative Marjorie Greene, the Old Glory Only Act would prevent U.S. embassies from flying anything other than the United States flag. If approved, Greene claims the bill would reflect an “America First Agenda”.

Greene further justifies the act by pushing the narrative that symbols of the Black Lives Matter and pride movements are so-called “Hate America Flags”. This agenda of erasure is dangerous. It is one that has wreaked havoc on Black and LGBTQ+ communities for decades, and continues to perpetuate values of hatred and separation in modern America.

In a statement released early February, Greene stated that “The federal government should only be flying the flag that represents all people, the American flag. We need to bring back pride in our country and raise the Star-Spangled Banner proudly.”

Unfortunately, Greene does not stand alone in her support of such policies; the Trump administration previously prevented American embassies from flying the Pride flag on their flag poles during Pride Month in 2019.

While pride and Black Lives Matter flags are meant solely to provide a sense of unity and solidarity for some of the nation’s most oppressed communities, Greene’s bill focuses on idolizing the past. She stands for such legislation only to fight projected implications she has twisted and transformed. In a bold and misinformed statement, she has previously referred to the Black Lives Matter flag as “the flag of the radical Marxist group.” In reality, the flag represents the decentralized movement campaigning against systemic racism and acts of violence against targeted individuals.

The controversial bill hides behind a mask of patriotism as it aims to silence support of genuine equality in this nation. LGBTQ+ and Black Lives Matter flags work to support the fight for equal and vitally equitable opportunities for minority groups nationwide, deserving their rightful place within our nation’s  institutions domestic and abroad.

The American flag of stars and stripes is not what makes us who we are, and it is not the only thing that represents us. Rather, the ability to show support for movements of love and equality is the very quality that makes us American. This nation would be nothing without its diversity and willingness to move forward, not backward, and banning flags representing the fight to protect the rights of some of the most vulnerable members of our society would do nothing but stand against that.

However, Greene did get one thing right: “This isn’t a political issue,” she later said in a statement on the bill.

The act’s proposal is far from a political issue. Rather, it is an issue surrounding American morality and the freedom to express support for symbols of equality. American embassies should have the freedom to stand with those groups and demonstrate support for the communities pushing for a more just America. Despite the Democrats’ control of both chambers of Congress presenting virtually no chance of the bill’s passage, the very proposal remains a shock and insult to all that the flags fight for and represent.

Fighting for these flags does not make us un-American. It is how we live up to this nation’s true intended spirit and is how we uphold an America that strives for equitable social change.