Remembering the Legacy of Harvey Milk

Kendall Carll
and
June 29, 2021
in
LGTBQ+
Courtesy of the Milk Foundation 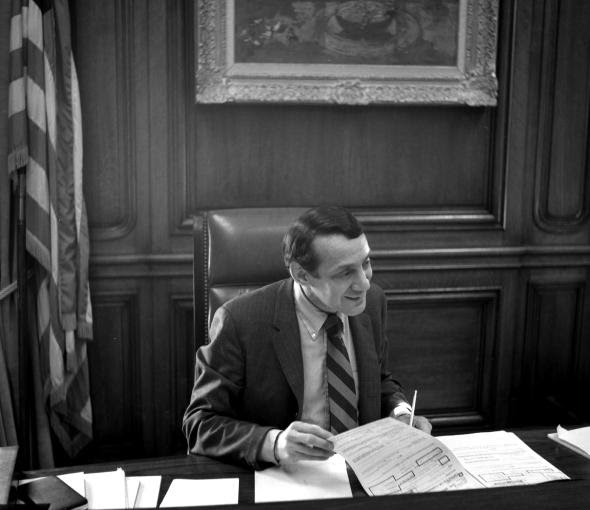 June is both an opportunity to reflect on decades of sacrificial activism and a time to demand solutions to persistent inequality. In reminiscing on past successes, current members of the LGBTQ+ community and its allies may also equip themselves with the methods of those who came before. While examples of brave activism are numerous, Harvey Milk’s story often stands out.

Harvey Milk become the first openly gay elected official in 1977 when he won a seat on the San Francisco Board of Supervisors. What was particularly meaningful about Milk’s election, however, was that he was unapologetically authentic in his identity not only as an elected official, but as a candidate as well. His election was a beacon of hope to the LGBTQ+ community that was facing “widespread hostility and discrimination.”

Milk had been vulnerably honest about his journey, explaining that while he knew he was gay at a young age he worked to conceal his sexuality for a long time, covering with his active participation in high school sports and comedic wit. After serving in the Navy, Milk became a politically conservative volunteer for presidential hopeful Barry Goldwater. It was through his “exposure to New York City’s bohemian theater scene” that Milk became increasingly open about his sexuality.

As an elected official, Milk worked to maintain his charismatic popularity by championing a “pooper-scooper” ordinance while also pursuing personal, more controversial legislation. During his time as a supervisor, Milk sponsored legislation aiming to ban discrimination in “employment, housing and public accommodations” perpetuated on the basis of sexual orientation. In a landslide decision, the bill was passed with a single dissenting vote, and was signed into law in March of 1978. Milk also successfully fought against items like the Proposition 6 ballot initiative which “sought to ban gay teachers and anyone supporting gay rights from working in California schools,” which was defeated by more than one million votes. Milk did meaningful work in his elected capacity, but that was far from the extent of his efforts. While in college, Milk published pieces posing issues with the lack of diversity in education and reflecting on the World War. During the 60s, Milk was a public school teacher becoming increasingly involved in politics. As the Vietnam war began, Milk engaged in advocacy, protesting against the war efforts.

A visionary civil rights leader, Milk’s time making ground-breaking progress was cut short. On November 27, 1978, one of Milk’s former colleagues, angered by his failed bid for another term as supervisor, assassinated Milk and Mayor Mascone. Even more upsetting is that Milk long-predicted the assassination. He received daily death threats, and had already recorded several versions of his will in anticipation of his assassination. In one of the tapes that became his will, Milk said this now-famous line: “If a bullet should enter my brain, let that bullet destroy every closet door.” Countless closeted members of the LGBTQ+ community came out the day of Milk’s murder, including his own nephew. A silent vigil was held the night of the assassination, with thousands spontaneously gathering to march Castro Street and onto City Hall.

Milk’s work has been memorialized as the subject of various opera, books, and films including, Shilt’s biography, The Mayor of Castro Street, and The Times of Harvey Milk. As we make our way through Pride Month and the fight for LGBTQ+ equality and representation persists, may the legacy of brave individuals like Harvey Milk inspire the movement.