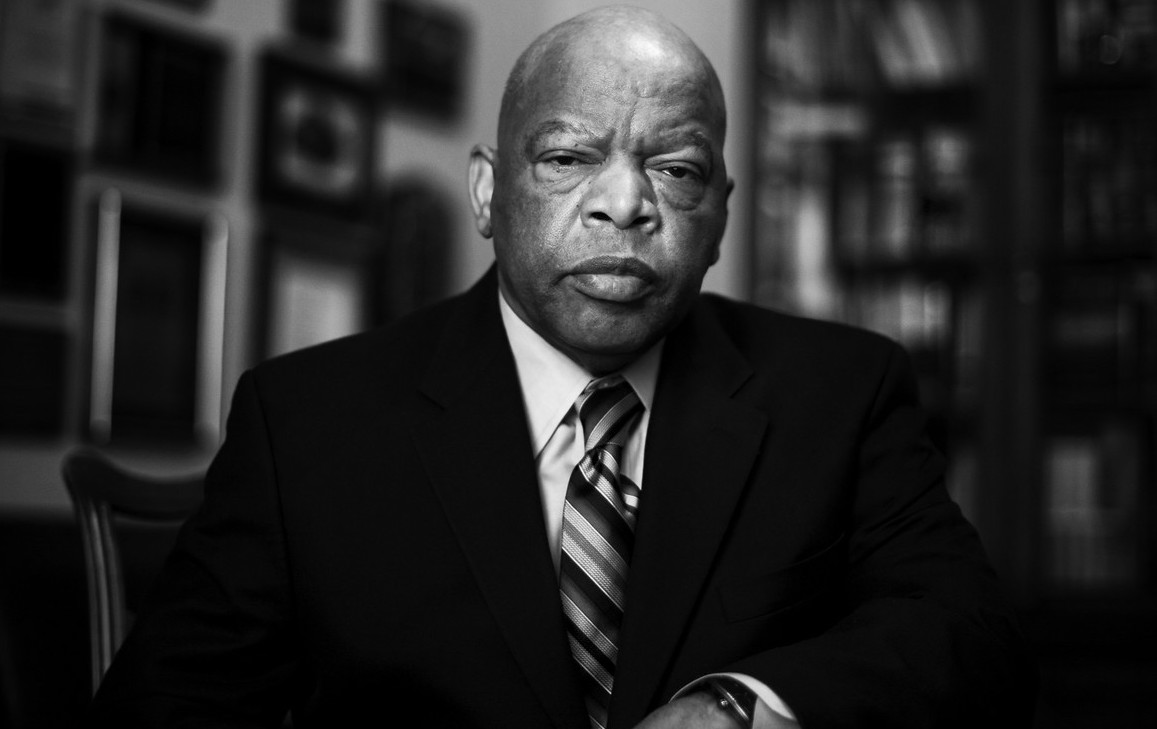 A man with a conspicuous countenance showing a strident life, his eyes project his courageous resistance when he was bored to the brunt during the Jim Crow era in the Deep South. Scars ingrained as the expressions of his face and blows to his body don’t tell his story of suffering and pain, of change and success. John Lewis’ refusal to accept segregation and white violence against Blacks was not resisting with physical force, but with the force of galvanizing the mass to protest with him, white or black. Every Black person undoubtedly despised segregation, yet few acted on it because of constant fear; however, Mr. Lewis had dignity for himself, moreover, his race. That sent him to a level of determination for Blacks to equalize with Whites which couldn’t be defeated- not even his death- because at its very core, his life was a tale of valor in the constant war against racial injustice.

John Lewis made a flawed society more perfect through his own unmatched sacrifices. The power of being able to change the status quo in the world relies on the commitment of people to acknowledge their mistakes, prejudice, and discrimination against a certain group of people. It stands to our generation now, and in the future, to act upon despotism and exploitation. He truly retains himself as an idol, leaving behind a legacy that few in history have ever managed to do. “When you see something that is not right, you must say something. You must do something. Democracy is not a state. It is an act, and each generation must do its part to help build what we called the Beloved Community, a nation and world society at peace with itself,” he told the future generations in his opinion written before his passing- in other words, citizens of United States need to uphold their blessed right to vote and use their voice to say “no” to the wrong. Americans become a liability for their country’s democracy when we don’t speak up to the empty promises made by politicians and leaders of this country. This is why we, as activists, must hold Lewis’ legacy as an icon of democracy.

And before the concetiful, egotistic, tempestuous, and monstrous practitioners of abuse face an end to their actions, we as activists also carry the responsibility to change racist reckoning of people into a new understanding for the discriminated population. He, John Lewis, did just that. Striking up his courage to confront Black oppression, he pushed his anger towards activism and help, which prompted him to write to Martin Luther King. Quickly becoming his confidante, their sensei and pupil relationship carried far throughout into their Freedom Rides together, backing each other up after tragedies, but most importantly, it was life-changing for Lewis. He first started in 1960 with the Student Nonviolent Coordinating Committee with sit-ins in segregated restaurants. He tested segregation in Southern cesspools of KKK hoodlums and fearless killers of Blacks. He was beaten and almost killed at his march to Selma on Bloody Sunday. He was arrested forty times from 1960 to 1966. He was arrested three times as a Congressman. A man who tackled injustice, he let peace and everlasting love dominate his soul to place a wedge in ending hatred. Lewis wanted the better for his country, and true patriotism occurs only when a person realizes the flaws of the country one loves so much. As former President Barack Obama once stated that “Generations from now, when parents teach their children what is meant by courage, the story of John Lewis will come to mind,” and every single American, not just activists, should “know that change could not wait for some other person or some other time, whose life is a lesson in the fierce urgency of now.” Time is precious- the longer you wait for something to innately occur, the more you lose.

John Lewis shows the world and those who aspire for change that one thing is possible: the seismic shift of a racist society eventually championing for Black equality. It’s an eternal recurrence- when the old generation leaves us, the next wave of guiding activists is reborn. It’s our job to carry on his will and his legacy. If you honor his courage, then be ready to defend it with activism and a bit of “good trouble.”