Observed on November 20th, the Transgender Day of Remembrance honors the lives that have been tragically lost as a result of transphobia

Rhea Balasubramanian
and
November 21, 2020
in
LGTBQ+
Courtesy of The Daily Signal 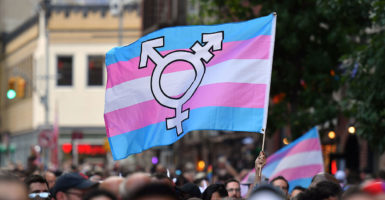 Every year, the United States pays homage to the transgender community by celebrating their lives and addressing impending issues that impact the transgender individuals through Transgender Awareness Week, which takes place from November 13th to 19th.

During this week, both transgender people and allies stand together to heighten awareness surrounding the need to bridge horrible disparities, share stories and experiences, and increase knowledge concerning the violence and discrimination that the transgender community faces everyday. While each and every trans issue carries incredible importance, recently, there are some that have been more prominent than others, continuing to attest to the idea that the United States doesn’t justly  protect our transgender brothers and sisters.

Specifically over the past two months, BIPOC (black, indigenous, and people of color) transgender people have experienced far more violence in comparison to cisgender individuals. Seven months into 2020, the death toll for transgender people had surpassed 2019’s dark statistic, with 28 transgender lives lost by July. The 28th victim, Aja Raquell Rhone-Spears, was wrongfully stabbed to death at the young age of 33 in Portland, Oregon. The eerie detail? His life was snatched while he was attending Tyrell Penney’s vigil, a BIPOC cisgender male who was shot dead outside a club. Rodrigo Heng-Lehtinen, the deputy executive director for the National Center for Transgender Equality (NCTE) stated, “Transgender people—and particularly Black and Latina transgender women—are marginalized, stigmatized, and criminalized in our county. They face violence every day, and they fear turning to the police for help”. In fact, as of August 7th 2020, NCTE reported the following statistics: “In NCTE’s U.S. Transgender Survey, which included more than 28,000 respondents, nearly half (47%) of all Black respondents... and 30% of all Latino respondents, reported being denied equal treatment, verbally harassed, and/or physically attacked in the previous year because of being transgender”. It’s a given that these numbers have reached darker places since being announced. In the name of taking action, the NCTE chose to publish “Failing To Protect & Serve,” a list of policies that the 25 largest police departments in America claim to abide by. The most “shocking” finding? Their fatal flaw was indeed, protecting the lives of transgender people.

The topic of increased violence against the transgender community, sadly aligns with November 20th, recognized as the Transgender Day of Remembrance. This day began with Gwendolyn Ann Smith, who decided to honor Rita Hester, a transgender woman who was tragically killed in 1998. This day commemorates the lives of all the transgender people that passed away due to heinous acts of violence. Typically, local transgender advocates along with LGBTQ+ communities come together and hold vigils in parks, community centers, and other venues, and read a list of names of those that died within the year. Unfortunately, CBS news reports that, “2020 is on pace to be the deadliest in recent years for the transgender and gender non-conforming community”. In addition, three-fourths of the victims since 2017 are very evidently acts of gun violence.

In terms of raising awareness towards serious transgender issues, it is a known fact that the transgender community suffers from significant health disparities. Nationally recognized organizations, such as the National Institute of Health, stress heavily on the fact that, “national research priorities should include rigorous determination of the capacity of  the United State healthcare system to provide adequate care for transgender individuals”. It’s been suggested time after time that there should be thousands of studies conducted that propose multiple potential solutions to address these gaps. While some may claim that the transgender community “asks too much”, implying that gender reassignments are a burden in our healthcare system, transgender people often battle with asking for simple medical tasks such as a flu shot, in fear of discrimination.

While the aforementioned issues need to stay relevant, it’s exciting and essential to recognize famous and influential transgender icons in our society today. Some of the more familiar ones include Caitlyn Jenner,  a retired Olympic gold medal-winning decathlete, or Laverne Cox, a two time Emmy award winner and actress on the Netflix hit show,  Orange Is The New Black. Jazz Jennings is a younger transgender female, one that sparked inspiration in many young children after proudly announcing her transgender identity at age seven. Some silent warriors in the transgender community include India’s Gauri Sawant, a transgender activist that fights for those in the LGBTQ+ community and HIV/AIDS survivors.