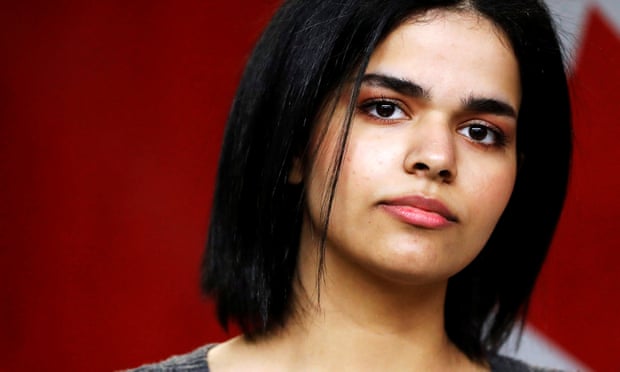 On January 12, 2019, 18-year-old Rahaf Mohammed arrived at Pearson International Airport in Toronto, Canada after garnering worldwide attention for fleeing the domestic abuse and disownment from her family in Saudi Arabia. Now, she takes the time to talk to the media in hopes of encouraging other Saudi women to become “brave and free.”

After officially being given asylum within the country of Canada, Mohammed had her first interview with ABC Australia to tell her story and to raise awareness for the treatment of women in her home country—a country where women are currently not allowed to work, marry, or even travel without the permission of a male guardian.

Mohammed’s brave actions sparked attention when she locked herself inside a Thai hotel room and refused to leave for six consecutive nights. She was so petrified of returning to her home country that she even considered taking her own life while in the hotel room, stating, “That’s why I wrote a goodbye letter. I decided that I would end my life, before I was forced back to Saudi Arabia.”

Mohammed recalls the first year of being in university, describing the desire she had to escape the abuse within her household that was caused by her father and brother, even referring to herself as a prisoner when discussing her relationship with her family. “I wanted to be free from oppression and depression,” she told ABC Australia. “I wanted to be independent. I wouldn’t have been able to marry the person I wanted. I couldn’t get a job without permission.”

Mohammed has shown independence in the past, and her family reacted by referring to her as “mentally unstable.” While her actions would be considered seemingly normal in Western society, cutting her hair and removing her hijab were considered wild and outrageous in her home country of Saudi Arabia. Mohammed received an absurd and enormous reaction from her family; she reported that she was locked in her room for six entire months, faced death threats for leaving Islam, and was also assaulted by her brother.

Now that Mohammed is officially residing within the country of Canada, she is much more content with her life and can finally be the “brave and free” woman she hopes other Saudi women can become. Her friend, Abeer, describes Mohammad’s newfound freedom: “The food, the clothing, every new thing – even the cold weather – makes her go ‘wow’… She ate her very first bacon and she loved it!” Mohammed has also dropped her family’s last name of “al-Qunun” and is trying to leave her past behind to start anew.

While one might think the government might condemn the actions of her brother and father, the Saudi Arabian government responded to Mohammad's “disobedient” behavior by accusing foreign countries of helping “Saudi female delinquents [rebel] against the values of their families and push them out of the country and seek to receive them under the pretext of granting them asylum.”

The Saudi Arabian government is, unfortunately, nowhere near understanding the concept of gender equality. However, Mohammed’s story and others like hers will hopefully enlighten people across the globe of the inequality occurring in Saudi Arabia and several other countries like it. It is important that we encourage women to seek better opportunities and start pushing a greater force on nations such as Saudi Arabia in telling them that their laws are outdated. These laws should not be tolerated by any means.

What can be done? Saudi Arabia heavily relies on the United States due to the money given to them by the U.S. for their oil resources. If the United States wanted to challenge Saudi Arabia on their unrighteous laws regarding women, and even potentially tie it to the rights of the LGBTQ+ community and for religious freedom, then they could limit the amount of money that Saudi Arabia receives from the U.S. With their economic security lessening, the U.S. could at least make a stance and an impact when it comes to pushing Saudi Arabia towards becoming a country of greater equality. It may take a lot of work, but it is a conversation worth starting in order to begin treating women as equals in all parts of the globe.