"Punish a Muslim Day" was Never on the Calendar

Letters sent all over London claim April 3rd to be “Punish a Muslim Day” and even offers points for committing hate crimes against Muslims from pulling a Muslim woman’s hijab from her head to bombing a mosque.

Elise Hsu
and
December 29, 2019
in
Courtesy of Twitter (@sarai_knowles) 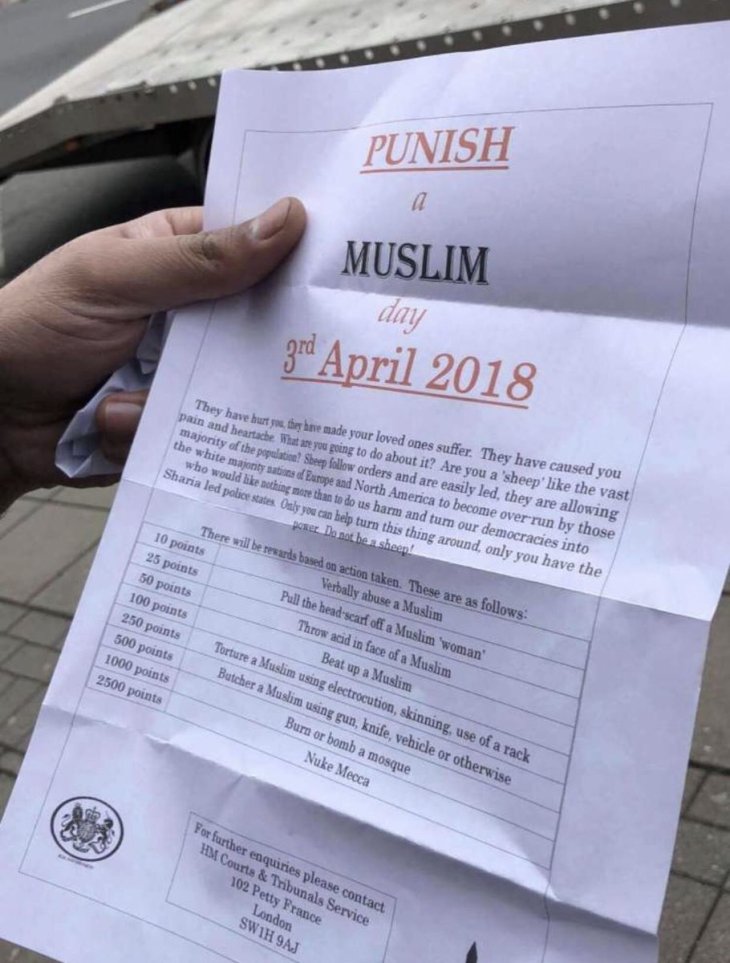 “They have hurt you, they have made your loved ones suffer. They have caused you pain and heartache. What are you going to do about it? Are you a ‘sheep’ like the vast majority of the population? Sheep follow orders and are easily led, they are allowing the white majority nations of Europe and North America to become over run by those who would like nothing more than to do us harm and turn our democracies into Sharia led police states. Only you can turn this thing around, only you have the power. Do not be a sheep!”

These words were featured on a letter that was sent all over London. The letters claim April 3rd to be “Punish a Muslim Day” and even offers points for committing hate crimes against Muslims from pulling a Muslim woman’s hijab from her head to bombing a mosque. The logo in the corners of the letters implies that the letters might be a part of a bigger campaign. Last year, an individual self-titled “The Muslim Slayer” targeted mosques in the U.S. and the U.K. with threats similar to those in this year’s letters. Tell MAMA, a UK-based news site, has been working with local police forces to find the perpetrator.

Upon reading the sickening letter, I realized that history has repeated itself. The threat reminded me of World War II when Jewish people were forced into concentration camps because of their identity. Everybody paid attention to that,I thought,but why hasn’t this story hit mainstream media?The answer? People aren’t paying attention. The threats don’t directly affect them so why should they take action? The majority of Americans aren’t Muslim, so, because they don’t see themselves in this news, they choose to ignore it. Not to mention, widespread islamophobia causes some to view these letters as less serious than they truly are or, possibly, agree with the message that they propagate. That is unacceptable. We need to support innocent people no matter their faith.

The perpetrator is only organizing this out of irrational fear and widespread stereotypes. They are scared of being alone in their cause and are trying to anonymously gain followers by hiding behind their words. Their arguments are built on lies and misinterpreted facts. Muslims are not trying to convert other countries into “Sharia-led police states.” They are not evil or dangerous. They are simply trying to live their lives.

Read the letter again, but change “Muslim” to “Christian”. How does it sound? Will the perpetrator only then realize how ridiculous the idea of targeting people for what they preach? Threatening to harm anyone because of their religion should not and cannot be tolerated anywhere. On April 3rd, take the right action to spread tolerance instead of hatred. Spread messages that remind anyone who feels targeted that they are not alone. April 3rd is not and never will be “Punish a Muslim Day”. And to the writer of the letters: it’s better to be a so-called “sheep” than it is to be a terrorist.