Proving Scientists Can Be Sparkly Too

“Wearing sparkles does not in any way diminish the seriousness of what we’re doing." 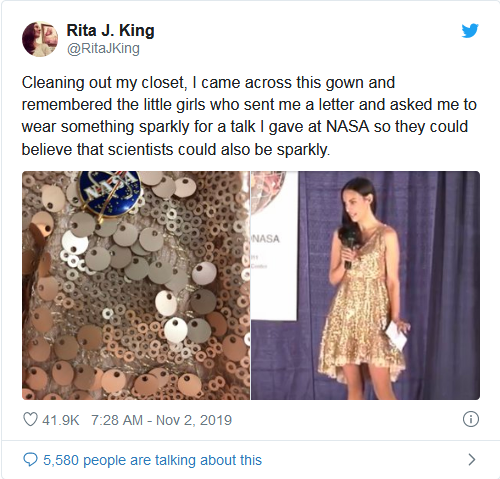 “Wearing sparkles does not in any way diminish the seriousness of what we’re doing," said NASA futurist Rita J King. King recently tweeted regarding the sparkly sequined dress she wore to a talk she gave for NASA. She was prompted to wear the dress when she received a letter from several young girls asking her to show them that “scientists could be sparkly.” This tweet gained a massive amount of attention as people around the world praised King for proving that women do not have to sacrifice their sense of self to “fit in” in male-dominated spaces.

“Wearing sparkles does not in any way diminish the seriousness of what we’re doing,"

Although the event occured in 2011, the message behind King’s actions is even more relevant today. With growing awareness around women’s rights and increasing numbers of women in STEM related professions, this tweet and the thousands of women and girls inspired by it serve as prime examples of the impact that can be made by more forward-thinking scientists and engineers like King. Involvement of women in the sciences is slowly but surely increasing. From 1993 to 2010, America saw the amount of women working in the biological and related sciences more than double; now, women make up over 48% of scientists in these fields. Since 1999, we have observed roughly a six percent increase in women associated with science and engineering professions. This number may initially seem diminutive, but it illustrates the progress we have made and the potential for future growth.

The idea that associates masculinity with success and hard work is rapidly becoming obsolete. With this positive trajectory, we must begin to eliminate the stigma around classically feminine styles like dresses and high heels in places of work. While many women feel comfortable in traditionally masculine clothing, many also wish to wear dresses, heels, and sparkles at work without feeling out of place. Ellen Ochoa, former space shuttle astronaut and current director of the Johnson Space Center, spoke about some of the difficulties she encountered as a woman, especially in her early years in her field. She recounted how being one of the few women in her classes made her feel self-conscious and a “little bit reluctant to raise [her] hand and ask a question.” She continued by saying that this hesitation lessened as she began to grow more confident as a capable member of her team. In the future, women should not feel as though their contributions are less valuable than those of their male counterparts, and this can begin by eliminating the expectation for women to dress or act more like men and making them feel more welcome in their workspaces. As we normalize female presence in STEM professions, we must begin to associate science, mathematics, and engineering with all kinds of dress, not just the traditional tie and briefcase.

Women should not feel the need to present as more masculine to be professional and successful. As one recent Twitter user aptly noted in her response to King’s viral tweet, “The idea that masculine is serious and feminine is frivolous limits the options girls see for themselves and their future lives.” Thus, the opportunity for young women and girls to see highly successful female scientists and engineers like King confidently express their femininity has the ability to inspire many.