Austin Ashburn
and
April 10, 2020
in
Activism
Courtesy of the Montreal Gazette 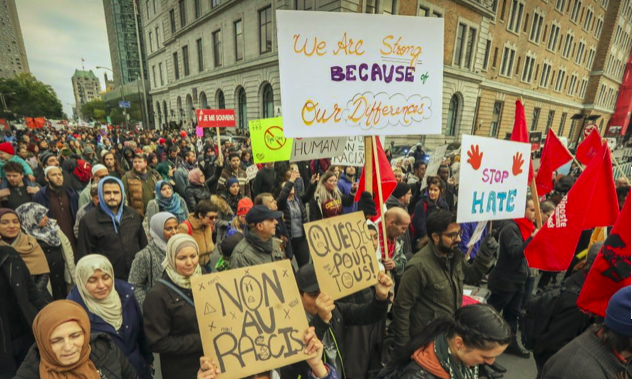 For Canadians, the month of October has started off with a powerful bang as two major anti-racism demonstrations have been held in downtown Montreal and New Glasgow, Nova Scotia.

3,000 advocates for the fight against systemic racism in the country of Canada participated in the protest in downtown Montreal on October 7, 2018. Speakers at the demonstration criticized and denounced Premier-Designate François Legault and his party, the Coalition Avenir Québec (CAQ), for policies deemed to be racist. One policy in particular that the speakers spoke critically of was an announcement made shortly after Legault’s election, as a follow up on a campaign promise to ban the wearing of religious symbols by civil servants in positions of authority. This would include judges, police officers, and teachers. If people in these positions were to refuse, were to practice their religion as they see fit, then they would have to find other jobs. While this may seem illegal, Legault plans on using the notwithstanding clause in Canada’s Charter of Rights which allows the government to override enshrined rights. The CAQ has also announced plans to reduce immigration by 20 percent while also forcing new immigrants who do not pass mandatory French and “Quebec values” tests to leave without any further help from the government.

Due to these frustrating and discriminatory policies, many at the protest wore their religious clothing such as their Muslim hijabs, their Sikh turbans, or their Jewish kippahs in solidarity of their rights to express and wear their customs freely. Safa Chebbi, member of the protest group Alternatives, spoke at the protest and told her fellow demonstrators, “Politics using the race card to stigmatize some groups are a real danger to our society.”  Lopez of the FFQ also added that, “We are here to resist policies that put already vulnerable people in vulnerable situations.”

One may not understand the importance of cultural wear if they have not experienced it themselves, but to put it in the words of 18-year-old protestor Yazid Mahlah whose mother wears a Muslim head covering, "If you take away my mother's veil, basically you take my mother from me… You take her identity from her."

Meanwhile, just one day after the protests in downtown Montreal, the province of Nova Scotia held their own demonstration in New Glasgow to protest the treatment of a 21-year-old black man by the name of Nhlanhla Dlamini who was shot in the back with a nail gun in his workplace on September 19, 2018 in Abercrombie, Nova Scotia. After weeks of racist name calling and harassment, Dlamini’s coworker continued his bullying by intentionally shooting Dlamini with a 3 ½-inch framing nail that punctured his lung. Angee Bowden, resident of New Glasgow, discovered the story and decided to organize a protest after seeing many demand justice for Dlamini. Tired of black communities facing racism more often than they should, she wanted to lead a demonstration to show youth in Nova Scotia that they have the power within them to create change.

Posters such as “Black Lives Matter”, “Where Are We Safe?”, and “End Workplace Racism!” flooded the streets on Monday of October 8, 2018. Human rights advocate Raymond Sheppard was also at the demonstration as a speaker and told protestors, "It is very disheartening in this day and age that a brother almost lost his life in the workplace… We bleed the same blood as any other nationality on Earth, yet we are treated differently,” he said, continuing with the statement that “We have to stop this injustice at all costs… We will overcome."

As many believe that justice has still not yet been found for Dlamini and the fight against workplace racism, further protests will be organized in New Glasgow and Halifax later this year where advocates will be asking for accountability from both the departments of justice and labor. To conclude the protest in the words of an organizer, “We're tired. Our youth are tired. And we're done watching us die.”

While Canada is currently undergoing demonstrations against racial discrimination of all kinds, this issue still occurs at a universal level. What can you do to raise awareness in your own local area or city, and—as Bowden tried to accomplish with her own protest—how can we encourage our youth to believe that they have the power within them to create change? Systemic racism is an undefeated part of our society, and our contribution to the fight against racial discrimination is what will help us wither it down little by little.