Profiting From The Classrooom: Devos, Greed, and Student Debts

Student loan debt in the United States is currently $1.5 trillion and climbing. 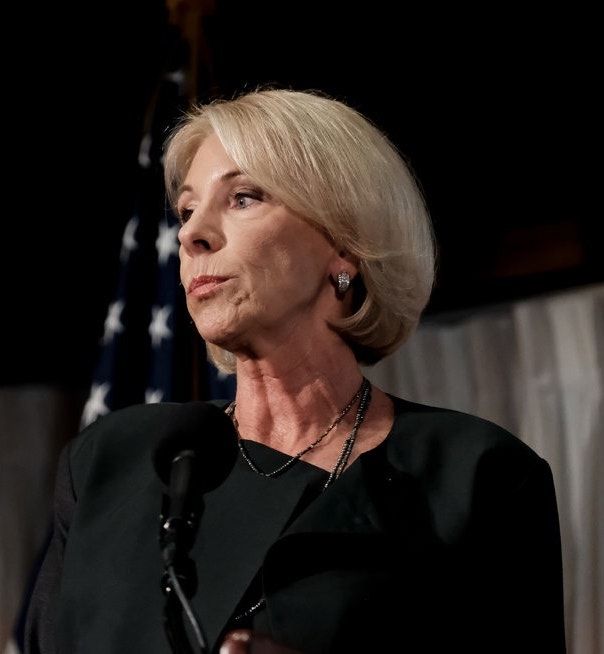 Student loan debt in the United States is currently $1.5 trillion and climbing. Now, that number is hard to visualize, so let’s put it in perspective. That’s Felicity Huffman raising 100,000,000 SAT scores, Lori Laughlin bribing 3,000,000 students into USC, and Betsy DeVos buying 37,500 more yachts. However, the student loan crisis isn’t perpetuated by irresponsible young adults, it’s because of the very institutions and policies meant to protect students.

DeVos paid a $100,000 fine, but that doesn’t erase the damage her administration has done. Because of inaccurate billings, 3,829 students made payments they did not have to, 1,147 were left without a loan status, and the credit of 847 non-defaulting students was harmed. By neglecting to enact student loan protection laws, DeVos has put additional financial strain on American students.

This instance is only one example of how the federal student loan program harms students rather than helping them.

First, let’s clarify how student loans actually work. The Department of Education doesn’t have the infrastructure to administer and monitor loans themselves, so they contract federal student loans out to for-profit companies. These lenders often use tactics to manipulate people into paying higher interest rates and are known to mishandle loan payments and keep information from students that would help them in the payment process.

Naviant, one contracter, was known to limit loan consulting phone calls to five to ten minutes, when discussions about loan payments structures should be 30 minutes to an hour. Having short consultations allowed Navient to misguide consumers into repayment plans that meant more profit for their company, but at an increased cost for American students. Navient alone is responsible for $300 billion student loans for over 12 million Americans.

Even today, Navient flaunts its “forbear them, forbear them, make them relinquish the ball” memo, supporting their frequent use of forbearance payment plans. On a forbearance repayment plan, individuals pause their student loan payments until they feel that they have adequate funds to resume monthly payments. The catch? The delayed payments come with a higher interest rate, making payments more difficult than before. That’s why companies like Navient encourage forbearance plans, rather than negotiating a more fair repayment schedule.

But let’s say a student in the United States just can’t pay off their loan, and they reach out to the Public Service Loan Forgiveness Program (PSLF). Theoretically, as long as they work 10 years at a public service employer like an NGO or the government, their federal student loans will be forgiven. Seems like a legitimate program that incentivizes students to work in the public sector and helps decrease student loan debt, right?  Well, that didn’t really happen. The people in charge of telling students about the program were the same contractors who manipulated them into not paying off their loans in the first place. In fact, some students were told they were on the right track to loan forgiveness, only to get rejected.

Congress tried to fix this program in 2018 by implementing the Temporary Expanded Public Service Loan Forgiveness (TEPSLF). But TEPSLF came with its own hurdles: students have to be on an income based repayment plan for 12 months before they can apply for loan forgiveness, but once again, the corrupt loan contractors are the ones who are supposed to introduce these types of payment plans to students. In addition, to be eligible for TESPLF, students have to apply and get rejected by PSLF. Seventy-one percent71% of TESPLF denials were because students did not apply for PSLF first—ultimately, because of loan contractors’ and the Department of Education’s failure to provide this vital information

In the end, 99% of students applying for loan forgiveness get rejected, leaving thousands of dollars and years of stress on their shoulders. From May 2018 to May 2019, the Department of Education processed 54,000 applications for the TESPLF, but only 661 got approved. Of the $700 million dollars set aside by Congress for student loan forgiveness, the Department of Education has only used $27 million.

DeVos’ recent court hearing is just the tip of the iceberg when it comes to America’s growing student loan crisis. It’s time to realize corruption in higher education is beyond Aunt Becky and elite institutions—it’s something that impacts almost every American student. The Department of Education has done nothing to mend their forgiveness program or their contractors. Even today, you can still get a loan from Navient, despite many lawsuits and media attention. College is supposed to be a time of exploration and learning. It’s supposed to be a time to pursue new passions, and experiment with career pathways. It should not be the subject of systemic corruption and greed.

Your Voice Matters: Why India Scrapping Article 370 Means We Need to Yell