These students are pushing for reforms to the Title IX process, claiming it is a “opaque, victim-blaming and traumatizing.”

Megan Glasgow
and
September 25, 2019
in
Student Rights
Courtesy of Newsweek 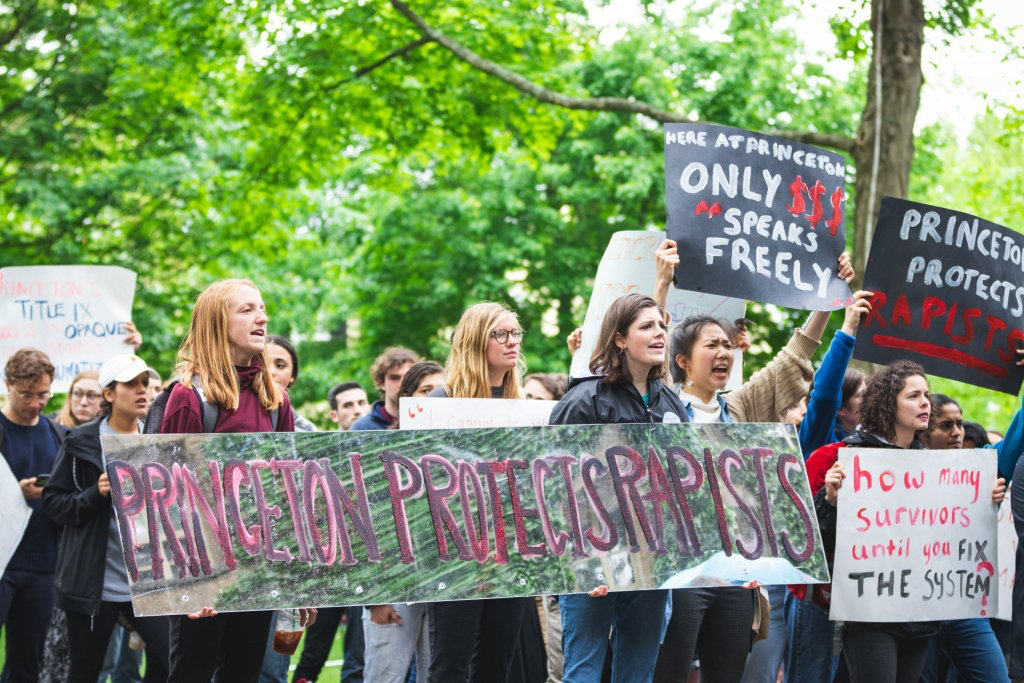 Countless Princeton University students have crowded the quads during peaceful protests of the school’s sexual assault policies. On one particular day, two girls held up a banner. “Princeton protects rapists,” it read. Their faces said more than the words written in bold red paint, mirroring the anguish of the other protesters around them.

These students are pushing for reforms to the Title IX process, claiming it is a “opaque, victim-blaming and traumatizing.” This process is a law delineating how schools and universities should deal with sexual misconduct.

Armed with a list of new Title IX demands and fueled by students’ stories, these Princeton protesters don’t appear to be giving in soon.

The inciting incident of these protests occurred on Princeton’s campus in 2016, when an unnamed student claimed she was raped by a classmate in her freshman year at the university. After reporting the incident, the undergraduate waited until she heard that her rapist received an innocent verdict this December.

Discouraged and alone, the young woman took to the streets on campus and began scrawling messages across walls, pathways, and bricks. They spelled out the now-familar words, “Princeton Protects Rapists.”

The university retaliated by charging the student $2,722.58, 50 hours of community service, and four years of probation for vandalizing campus. After gaining negative media attention, Princeton spokesman, Ben Chang clarified the intentions of the fines.

“Let’s be clear: students are not disciplined for participating in peaceful protests or speech ― students are subject to discipline if they deface and damage university property,” Chang said.

Since starting her journey in January, the student has gained support and attention from classmates, ensuring that no one would miss the messages she left around the school. Her case has spiraled into protests, social media tags including “Princeton IX Now,” and even financial support through a successful GoFundMe. Classmates and supporters have passed their goal and raised over $4,000 to help the student pay her fines in full.

The attention sparked by this incident has led many students to question Princeton’s Title IX procedures in general. Princeton claims the scenario failed to violate their prohibited sexual conduct policies, which include sex discrimination, nonconsensual sexual contact, stalking, domestic violence, and sexual harassment. It is also important to consider that the university shouldn’t be dealing with these charges as much as the criminal justice system.

Though the university’s motives behind the charges on the student appear to be vandalism, the punishment sends a foreboding message to other sexual assault survivors hesitant to speak up.

“Know Your IX” manager, Sage Carson spoke about the school stepping out of line for this case.

“Not only did Princeton not find [the accused] responsible, they also implemented this extremely harsh sanction in response to her speaking out about her case,” Carson said. “This says to her that if you talk to people about how the school handled your case ― we are going to retaliate against you.”

As the protests have grown, their slogans have too. Over the past few months, Princeton has found many new graffitied words around campus. The last instance occurred in early May, when several new messages were spray painted onto walls, statues and buildings, including repeats of the student’s original memos and other pointed sentences.

Princeton plans an investigation into the ongoing graffiti.

The phrase “strength in numbers” comes into play more than ever as the case stumbles far deeper into the limelight than Princeton ever intended. The university holds its rights to discipline students for vandalism – defacing property does not equate to freedom of speech.

However, many students take the message with a grain of salt, saying it also warns future survivors to bite their tongue lest they face similar charges. Until the school and Title IX make a change on their sexual misconduct policies, the students plan to continue their sit-ins and other forms of protest, and they will not stop until every student can speak up without a hint of fear.