Present-Day Pardon Made to Compensate for Past-Century Unjust Judgment

Sure, pardons were declared, and names were cleared, but the stigmas that influenced the unjust jurisdiction to begin with, deep rooted in racism, unnecessary hatred, and colorism, will stand permanently--unerasable and indelible.

Isabella Folchetti
and
September 23, 2021
in
Justice
Courtesy of The Times 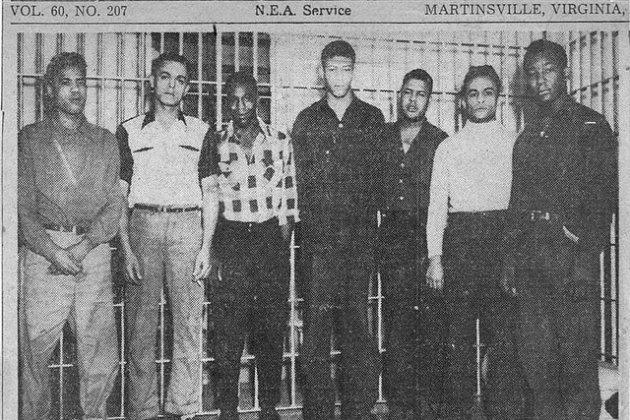 August 31st, 2021 marked the beginning of a necessary end, a rekindling that both vindicated victims of an unjust conviction and restored for them the human dignity they were blatantly stripped of. A flashforward reflection of the crime that had occured on the eighth of January, 1949, and the racial uproar that influenced the sentencing of the alleged perpetrators, simply due to the color of their skin. One final court order, instated decades after the initial trial, repealed the sentencing and conviction of the seven men, otherwise known as the “Martinsville Seven,” for the alleged rape of thirty-two-year-old Ruby Stroyd. Upon re-evaluation of the case that had gone virtually forgotten for decades, likely re-addressed due to heightening civil rights movements regarding marginalized groups, we must ask ourselves, what was the incentive for the pardoning of the Martinsville Seven, years after all of the perpetrators were sentenced to death? Was it to free the individuals of the animalistic stigma that entrenched them, as the deciding honor, Judge Northam implied when stating that this pardoning was about “righting wrongs”? Or was it to clear the wrongdoings of the due process itself– compensating for the unfair trial said individuals had faced, and the bias of an all-white jury that polluted the courtroom at the time of the sentencing?

Subsequent to reading the beginning paragraph, you may have wondered what case was being referenced– after all, you heard all this talk about seven men who had very likely been stripped of their own civil liberties, simply due to the color of their skin and the accusation of pursuing a capital offense– and to that question, the answer arrives simply: the trial of the Martinsville Seven, all of whom were black men accused of rape. The said trial occurred in 1949 and posed as a pillar for social and racial hierarchy, exposing the undercurrents of what our government (both in the present day and past) bases itself on: liberty and justice for those of Caucasian descent, and those same privileges often stripped from marginalized groups. In this particular case, failure of due process and a near mistrial due to overriding bias surely prevented justice for both the victim and the accused. Hyperfocusing on the racial and cultural background of the alleged perpetrators and how such could possibly tie into the animalistic nature of the crime they were charged for, rather than prioritizing justice for the victim, is, and never will be, a proper trial method. Prior to the trial, the seven men– Grayson, Frank Hairston Jr,  Howard Lee Hairston, James Luther Hairston, Joe Henry Hampton, Booker Millner, and John Clabon Taylor– all of whom were either in their late teens or early twenties, were questioned in order to rule out or pinpoint specific suspects. According to CBS News, those seven individuals were unable to read or comprehend the confessions and other legal documents they were urged to sign. Not to mention the fact that at the time of each investigation, none of the suspects had access to a lawyer and were questioned under the threat that, should they not confess, further time would be served.

After questioning, those seven suspects were charged as the principal perpetrators, which then led to their collective sentencing to death via the electric chair, which has now been outlawed in nearly every state for reasons of inhumanity and misuse. Considering the fact that said individuals were tried by an all-white jury, their fate was practically determined as soon as they were accused. There was no way that, in the late 1940s, Black men accused of raping a white woman would even be considered “innocent,” as the common mindset surrounding said individuals was that they were no more than animals surely capable of pursuing such an inhumane crime. If you were to refer to statistics, it would become clear that, although rape was one of the most condemned forms of violence, the death penalty for said crime was almost exclusively imposed on Black people. This is evidenced by how, from when electrocution was first implemented as a form of capital punishment in Virginia in 1908 up until the early 1950s, all forty-five that were sentenced to such electroshock-induced death were Black. If the Martinsville Seven had been white, it is likely that the August 31st pardon would have been unnecessary and the protesters that picketed at the White House, pleading for mercy on behalf of the seven, would not have advocated for the underspoken.

With all this in mind, I urge you to think about the families directly affected by the sentencing of those seven men. When pardons were finally granted to each of these individuals, do you believe that their families were relieved of the suffering the verdict caused? Do you believe that they understood that their own loved ones would pose as agents for the rewriting and defining of history, so much so that jurisprudence will no longer maintain the right to sentence based on color and prejudice? Although the answer to these questions would seemingly be “yes”, stop and think: would you sacrifice yourself or a loved one for the benefit of redefining narratives and providing a more just future? Would you wish to be a byproduct of a grave historical wrong, with your sentence served on a silver platter of predisposed judgement? Would you wish to return to the polluted courtroom you once associated with the sentencing of your loved one(s), solely to understand that the punishment they received, although repealed and deemed “unjust,” is unerasable, for their actions may be pardoned, but their sentencing cannot be un-construed?