Portland: Authorities vs. the Constitution

In Portland, fully armed federal officers have thrown protesters into unmarked rental cars without identifying themselves. 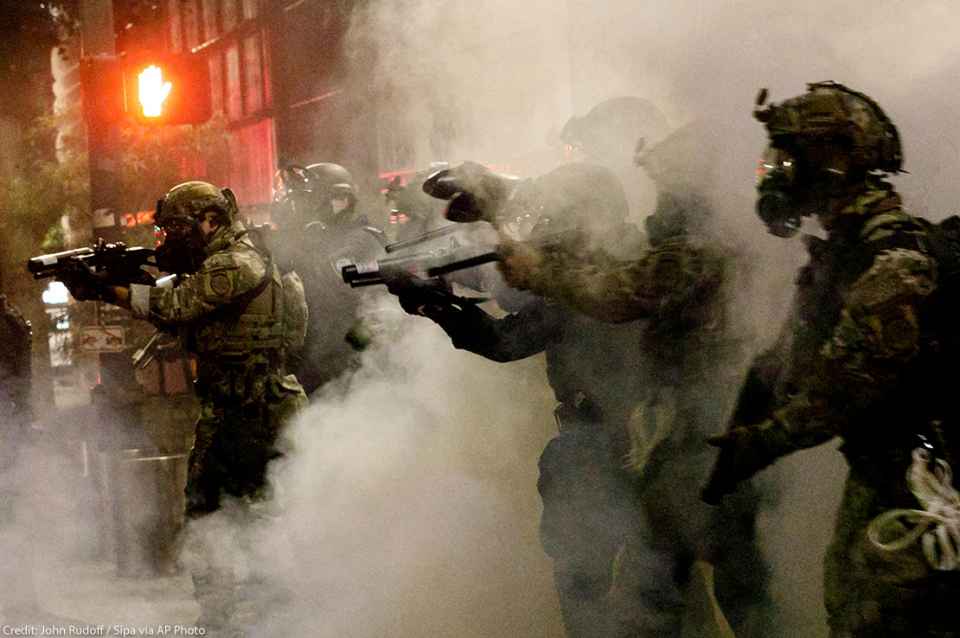 After the brutal murder of George Floyd, the Black Lives Matter movement has gained national support and traction across the country; however, with this renewed momentum has also come resistance. While many protests have remained peaceful, some have broken out into violence mainly as a result of increased police interference, which has riled up crowds even more. But even when crowds get violent and begin to riot, protestors are still entitled to their first amendment right to protest and their fifth amendment right to due process. Police officers who have sworn to uphold the law must follow the very principles of democracy they claim to protect. However, this is certainly not the case in Portland, Oregon.

In Portland, fully armed federal officers have thrown protesters into unmarked rental cars without identifying themselves. Under the Freedom of Information Act, uniformed officials must always identify themselves by giving their names and badge numbers, but these officers are providing neither. Additionally, these officers are arresting people and throwing them into these unidentified vans without probable cause and denying them due process, which is a complete violation of the fifth amendment.

Portland Mayor Ted Wheeler has called for federal agencies to stay away from protests. These federal agents have caused more harm than good by striking protesters with life-threatening tear gas and rubber bullets. City Commissioner Jo Ann Hardesty has also spoken out against the police activity in Portland by saying the city would “come together to stand up for our constitutional rights.” In such a tense time, government officials must use their authority to control the violence taking place. While Mayor Wheeler and Commissioner Hardesty have expressed their support for the protesters and the ideals of democracy, President Trump has continued to defend the Portland officials through a series of tweets.

On July 17th, the Portland attorney general filed a lawsuit against federal agencies, alleging that they violated protestors’ civil rights by detaining them without probable cause. As constitutional violations continue to amass by the day, this lawsuit only served to further exacerbate existing tensions between the Trump administration and the people of Portland. Many clips have also shown these officers attacking journalists who clearly identified themselves as media, which is a direct violation of their first amendment rights. Many protesters have acknowledged the irony of the situation: while trying to combat racial injustice and police brutality, they are being brutally attacked with tear gas and denied their first amendment rights.

After such blatant disregard for the principles of democracy, which all officers take an oath to protect, it is quite frankly a demonstration of negligence for government officials to cast a blind eye and ignore what is taking place. Those in the highest ranks of power have a civic responsibility to protect the livelihood and the rights of the people, both of which are being denied. Police continue to argue that protesters need to be constrained as they allegedly “wreak havoc” on Portland’s neighborhoods. But this is merely a justification for the measures taken by police since they are aggravating the situation by breaking the law and giving protesters more cause to rally. The Trump administration continues to defend the illegal acts of Portland authorities while the people are left to fend for themselves. The whole situation is undoubtedly a constitutional crisis as more rights are violated each passing day and going unchallenged by the higher authorities.