Aairah Koujalgi
and
September 28, 2021
in
Justice
Courtesy of BBC News 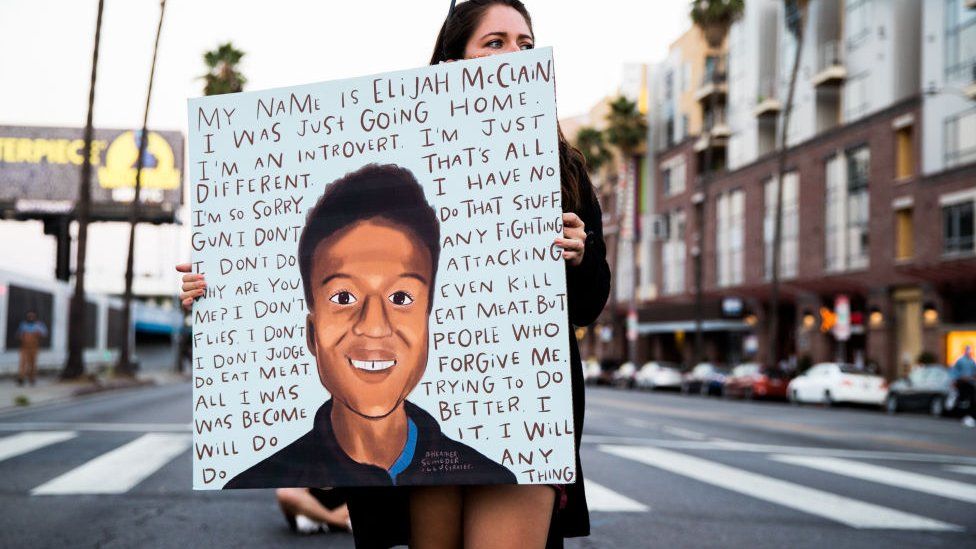 August 30, 2019: the day Elijah McClain was removed from life support.

Just 6 days earlier, McClain was a 23-year-old minding his business, walking home from a convenience store in Aurora, Colorado. At 10:30 PM, a man made a call reporting suspicious activity from McClain, who was wearing a ski mask and holding a bag of iced teas. Bodycam footage shows that Officer Nathan Woodyard was the first to arrive at the scene — seconds after he tries stopping McClain from walking away, he grabs his arms. Minutes later, 2 other officers arrive: Randy Roedema and Jason Rosenblatt. During a struggle, in which an officer claimed that McClain reached for another officer’s gun, he was placed in a carotid hold — which “cuts off blood flow to a subject’s brain,” according to the indictment — by one of the officers. “Why are you attacking me?” McClain pleaded after regaining consciousness.

The 3 officers called for backup and told the responding officer that McClain was actively resisting handcuffs and was reaching for an officer’s gun. Soon later, paramedics Jeremy Cooper and Peter Cichuniec arrived on the scene and injected McClain with ketamine, a drug intended to sedate overly aggressive people. The dose they used was almost 1.5 times the proper dose for 140-pound McClain; alarmingly, the drug is also known to result in hospitalizations and deaths due to lack of protocols and training. McClain soon after suffered from a heart attack and stopped breathing.

Due to the case’s large amount of traction, Colorado Attorney General Phil Weiser decided to launch an independent investigation in June 2020. In January of 2021, he “announced a grand jury would determine whether the officers and paramedics involved should be charged.” The grand jury came to the conclusion that the police had “used excessive force to restrain McClain despite a lack of evidence he had done anything wrong, and that paramedics used far too high a dose of the tranquilizer, which legally is considered a deadly weapon.” The indictment also stated that the paramedics misconstrued McClain’s weight and did not monitor him after administering the dose. Officer Woodyard, Roedema, and medics Cooper and Cichenuic are all still employed with the city, but are now suspended on unpaid leave. Officer Rosenblatt was fired the previous year after his text messages about McClain came to light. All 5 have been charged with one count of manslaughter and one count of criminally negligent homicide.

The fight for justice for Elijah McClain was a slow one, but the result should have occurred 2 years ago. McClain was another young Black male fighting for his life — a life that he shouldn’t have needed to be fighting for in the first place. Until 2020, McClain’s case was ignored due to the Attorney General claiming there wasn’t sufficient evidence, and it took a mass outrage regarding the Black Lives Matter movement for the case to be opened and investigated once again. Why wasn’t McClain’s case given more attention before? This exemplifies America’s broken justice system, a justice system which picks and chooses the cases it publicizes. We must fight for justice, not only for all those who have lost their lives, but to prevent future lives lost.