During a service that morning, a shooter stormed into the Tree of Life Congregation Synagogue in Squirrel Hill, Pennsylvania and killed 11 people.

Elise Hsu
and
December 29, 2019
in
Religion
Courtesy of the LA Times 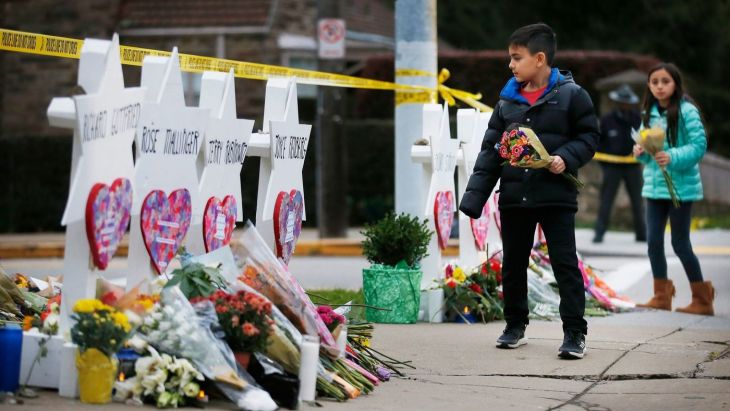 On October 27th, the Jewish community saw a tragedy.  During a service that morning, a shooter stormed into the Tree of Life Congregation Synagogue in Squirrel Hill, Pennsylvania and killed 11 people.  He also shouted anti-Semitic comments and shot at two policemen and two SWAT officers who were trying to get wounded survivors away from harm.

Because the Sabbath—a weekly day of rest for some Jews that lasts from sundown on Friday to sundown on Saturday—wasn’t over yet, most Orthodox Jews didn’t learn about the shooting until hours after it happened when they switched on their phones for the first time that weekend. Taffy Brodesser-Akner, a New York Times journalist, tweeted that it was “unbearable to watch observant Jews come online and absorb the news.”  It is heartbreaking to know that there were people who this event concerned that couldn’t know about it as soon as it happened. Those people could have had friends or family in that synagogue that day, and not being able to learn the status of their loved ones right away could have taken an enormous emotional toll on them.

The shooter, Robert Bowers, is a known anti-Semitic. Shortly before the shooting, he made a post on Gab, a site often used by white nationalists, denouncing the Hebrew Immigrant Aid Society for bringing “invaders in that kill our people.”  After the shooting, he was charged with 29 federal counts, which included 11 charges of hate crimes.

This man purposely targeted the Jewish community because of their religion, killed numerous people, and should be labeled a terrorist. However, he will fly under the radar, because he doesn’t have brown skin. He doesn’t wear any head covering. He is a white male and a part of the majority of the American population. Why must we, as Americans, target people that are different than most, target minorities, when the real perpetrators tend to look just like the people you see on television? Anti-Semitic discrimination has been happening for quite a few years, so why haven’t we learned from the past?  Germany has already recognized the mistakes it made during World War II and ensured they would never be repeated again. Are we too scared to admit that we are wrong? That our solutions are not working? If so, the day that America becomes ashamed of its anti-Semitism is one that is highly anticipated.

You are probably wondering, “Well, what can I do?”  You can donate to organizations like the Hebrew Immigrant Aid Society, which helps refugees of all faiths around the world.  You can also donate directly to Tree of Life, the synagogue where the shooting took place. But the most important thing you can do is support your loved ones who are Jewish. This act of anti-Semitism shook the Jewish community, and showing support would mean so much.