May Zheng
and
December 1, 2020
in
Justice
Courtesy of MPR News 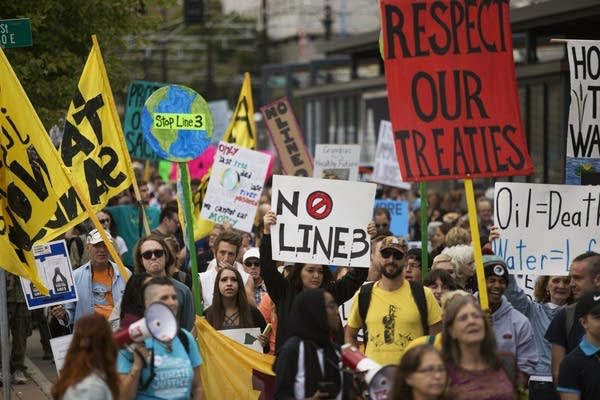 Since 2014, a tireless coalition of environmentalists, Indigenous people, and civilians has formed in response to the renovation of Pipeline 3, a crude oil pipeline over one thousand miles long, bringing almost one million barrels of oil to homes and corporations through Indigenous land. Although their battle has been primarily waged in courtrooms rather than flashy media headlines, the outcome of Pipeline 3 being expanded or not has significant consequences for the environment as well as nearby residents.

The project has been approved in Canada, North Dakota, and Wisconsin, but is facing the most legal pushback in Minnesota from climate and Native American advocates. Enbridge, the Canadian company responsible for Pipeline 3’s construction and renovation, is North America’s largest fuel pipeline company. In addition to providing energy to millions of homes and corporations, they have also invested over $20 million into community-strengthening initiatives across North America. Although a central group opposed to Pipeline 3 is Indigenous people, Enbridge claims that this project has generated over $400 million in Indigenous economic benefits, in the form of wages and employment for the project as well as outreaches and investments in Indigenous businesses and business training.

Giving Pipeline 3 the green light would indubitably boost the economy by supplying households and companies with fuel, as well as jobs from Minnesota, neighboring states, to Eastern Canada and the Gulf Coast. On average, in these different regions, Enbridge estimates that there will be approximately $334 million in wages for workers and a $162-million boost out of construction for local economies and refineries. Enbridge will also be paying tens of millions in property taxes during construction, quantities that would increase each year as the pipeline expands. Increasing the supply of oil in these regions would bring down the price for everyone living there, as well as the trading partners of the refineries. Prime Minister Justin Trudeau of Canada has publicly supported Line 3 as well for being a less dangerous and environmentally harmful means of sustaining and strengthening Canada’s oil industry.

Many have challenged these claims of Pipeline 3’s supposed benefits. Economically, there have been multiple lawsuits disputing the amount and validity of revenue that Pipeline 3 would bring. These lawsuits have alleged that Enbridge avoided paying taxes during previous pipeline projects and subsequently left counties in Minnesota in tens of millions of dollars in debt. The Minnesota Department of Commerce also questioned high projections of oil transport for depending on an unrealistic prediction for future demands for oil; however, the main opposition to Pipeline 3 is out of concern for the environment and neighboring Native American communities. The Environmental Impact Statement details how the new Line 3 pipeline would increase deforestation, risk damaging Minnesota's water ecosystems, and pollute the air to a degree equivalent to 50 new coal-fueled power plants. Native American communities, most notably the Ojibwe people in Minnesota, have fought the project legally and socially on the basis of treaty rights, which were established throughout the 1800s to protect tribal land - which the new Line 3 pipeline would trespass on and threaten the stability of. This land includes pristine areas of nature, endangered species, and immense cultural value.

On top of environmental and Indigenous respect concerns, anti-Line 3 activists state that fossil fuel projects are linked to increased drug and sex trafficking in and around Native American reservations. During construction, workers are forced to live in temporary housing along the route, dubbed “man camps.” The high wages and social isolation in these areas form a toxic combination, often leading to drug use and violence on the nearby Native Americans. Already, prostitution and sexual exploitation is more prolific in Indigenous communities than other ethnic groups due to a lower socioeconomic status - many women especially in this industry are often directed to “man camps” as the higher concentration of potential clients is more profitable. In these camps, studies and Indigenous people report drug use that excarberates already prolific violence, especially against Indigenous women, spreading trauma and sexual abuse. Still, many construction employees report managers at some camps with zero-tolerance policies for misogyny, bullying, or harassment. In fact, construction spokespeople state that corporations that work heavily in regions close to Native American regions have developed Indigenous-focused cultural awareness training for workers, as well as strictly enforcing zero-tolerance policies for misogyny and drug use.

Dealing with the old Line 3 pipeline is also a point of contention. Enbridge proposes "deactivation,” which would remove the oil, clean and disconnect the pipe, apply corrosion controls, and leave the pipe in the ground. Opponents allege that there will be significant amounts of pollution left over from this process, and landowners along the old route are concerned that they will be the ones paying for “deactivation” in labor costs and lost property value. Legal and environmental groups worry about the example that decommissioning a pipeline in a rather haphazard and unclear manner would set for the power of corporations to have a strong influence on the wellbeing of a local population.

Pipeline 3’s expansion puts jobs, economies, cultures, ecosystems, and communities on the line, making it truly worthy of our efforts and attention. A consensus is emerging that continuing to invest in older, less sustainable energy, such as Line 3’s tar sands, is not conducive to future societal and environmental health. To support environmental and Indigenous groups, becoming aware is the first step, before potentially donating to organizations such as Honor the Earth and MN350, as well as “de-investing” from banks which support Tar Sands pipeline expansions. Action can also be taken in the form of education and organization, whether that be creating an infographic to share online, hosting a fundraiser, participating in canoe protests, or streaming music by Native American artists who are active in opposing Line 3. Whatever the outcome, Line 3’s construction or demise will be symbolic of society’s hierarchy of priorities and set precedents for the future.