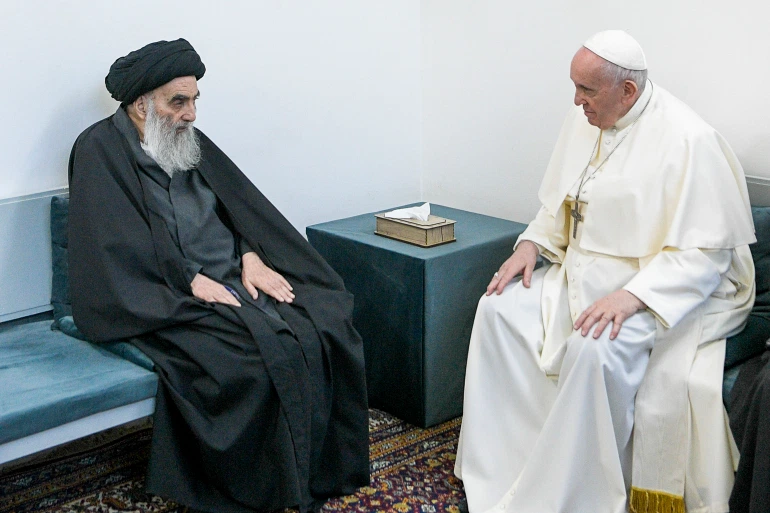 In a powerful symbol of hope and unity for Iraq, the Middle East, and the world, Pope Francis recently conducted the first papal visit to Iraq in the history of the Vatican, and met with Islamic Shia leader Grand Ayatollah Ali al-Sistani as a self-proclaimed “pilgrim of peace, seeking fraternity and reconciliation”.

The Christian population of the war-weary Middle Eastern nation is no stranger to religious persecution. Despite Christianity being one of the country’s oldest religious communities, the numbers of Christians in Iraq has fallen from roughly 1.4 million to under 250,000 since 2003, from persecution and forced displacement by ISIS, known in the Arabic world as Daesh. The infamous militant organization has not held back in its destruction of Iraq’s historical Christian sites either, as seen with the demolition of Iraq’s ancient Dair Mar Elia monastery in 2014.

After years of endless news of regional violence and suffering, in the excitement surrounding this historical meeting of the pope and the ayatollah, there seemed to be an air of positivity in much of the country. According to NBC, Iraqis heartily greeted the visiting pope with “white doves, folk dances, an honor guard, and colorful street graffiti.”

Pope Francis’s visit, which lasted from March 5-8, covered cities including Baghdad, Mosul, Qaraqosh, Ur, and Najaf, the last of which being where the meeting with Ayatollah Sistani took place. During this closed-door meeting, set in the ayatollah’s residence and lasting forty to fifty minutes, the importance of the unity of the Iraqi people and the respect for all human life, regardless of religion, were affirmed by the two leaders. According to the official statement released by the ayatollah’s office, Ayatollah Sistani also made it a point to emphasise the “role that the religious authority plays in protecting [Christian Iraqis], and others who have also suffered injustice and harm in the events of the past years.”

In addition to the meeting, Pope Francis visited various churches throughout the nation and travelled to Ur, a symbolically unifying location significant in all three Abrahamic religions. There, he met with Christian, Yazidi, and Islamic leaders and told the public, “From this place, where faith was born, from the land of our father Abraham, let us affirm that God is merciful. Hostility, extremism, and violence are not born of a religious heart: they are betrayals of religion.”

The pope’s meeting with Ayatollah Sistani, in addition to the various endeavors that followed, served as a call to embrace the nation’s Christians and, according to Iraqi Christian Feras Ramzi, sent the message that the Vatican “won’t forget its sons and daughters in Iraq”. Fadi Slewa, another one of the country’s residents, remarked that “the pope came to Iraq offering peace. Peace is the language that all Iraqis should speak, no matter if they are Christians, Muslims, or from other religions.”

The impact of such a historic visit, however, extended beyond religious lines, into politics and the nation’s overall wellbeing. Iraqi native Ali Thijeel represents a large portion of the country’s population in his proclaimed belief that “This is what [Iraq residents] were waiting for. This is a message to the government and politicians. They should take care of the city and pay attention to our history.”

Looking forward, the meeting between leaders of the world’s two most widely practiced religions provides hope for a future wherein people’s right to observe their own religion free from persecution and disrespect is not a privilege, but the norm observed in societies all throughout the globe. As Pope Francis himself said, “We reaffirm our conviction that fraternity is more durable than fratricide, that hope is more powerful than hatred, that peace is more powerful than war.” Bringing hope and validation to Iraq’s remaining Christians, it is yet another milestone forward, turning away from many years of religious conflict and violence in the region.

While this recent event has set a foundation, there is still much work to do in order to turn the vision it proposed into a reality. Toleration shouldn’t exist solely in the objective and physical matters of the world; it should exist in hearts and minds, as well. People must wholeheartedly believe everyone possesses the right to religious freedom if true progress is to be made; no matter how many laws are passed, as long as sentiments of religious supremacy and inferiority remain, society will never be truly equal. It is with this in mind that we may all learn something from what Pope Francis said at his speech in Baghdad’s presidential palace:

“Only if we learn to look beyond our differences and see each other as members of the same human family will we be able to begin an effective process of rebuilding and leave to future generations a better, more just, and more humane world.”