Instead of promising to fix past issues, these superficial campaigns and announcements only acknowledge the fact that they were there, and some even cause more harm than good. 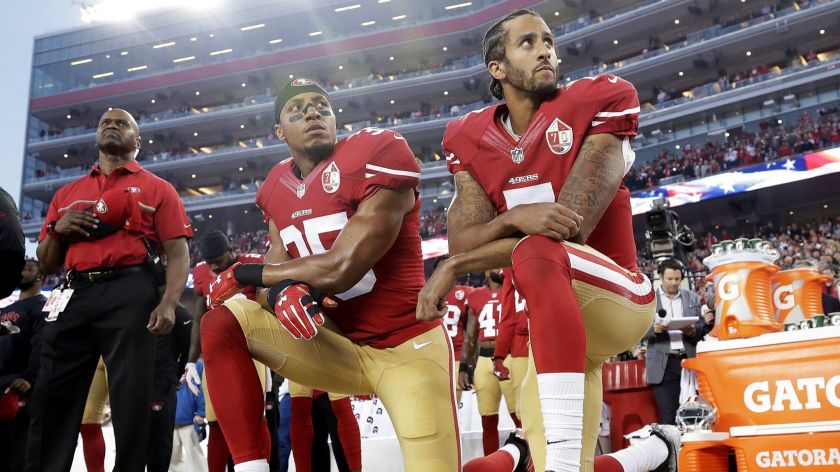 The National Football League (NFL) recently announced that before each Week 1 game, there would be a performance of “Lift Every Voice and Sing,” better known as the Black national anthem. This announcement came after Commissioner Roger Goodell released a video addressing Black Lives Matter and said he would support athletes who choose to protest peacefully. However, many feel that these changes are not enough to address the NFL’s past experience with racism.

At a football game in 2016, then-quarterback Colin Kaepernick kneeled during the National Anthem as a peaceful protest against police brutality. This protest sparked a nationwide debate about politics’ place in the sports world, with Barack Obama and Donald Trump taking sides. However, Goodell claimed to disagree with Kaepernick’s actions, and Kaepernick opted out of his contract with the 49ers in 2017.‍

Goodell’s statement is one example of performative activism, along with #blackouttuesday and statements from Starbucks and other companies. Instead of promising to fix past issues, these superficial campaigns and announcements only acknowledge the fact that they were there, and some even cause more harm than good. In the case of #blackouttuesday, so many people used the wrong hashtag for the campaign that #BlackLivesMatter was flooded with black squares, while informational posts were drowned out.

Although Goodell claimed to support athletes who choose to protest peacefully, he failed to address the NFL’s controversy with Kaepernick. As of today, the former quarterback is blacklisted from joining an NFL team because of his protest. His absence from Goodell’s statement makes it seem rather shallow, as Goodell apologizes for his actions without even addressing his personal and the NFL’s institutional history of standing against Black protest and thus Black lives. For example, in his original statement about Kaepernick’s protest in 2016, Goodell claimed that patriotism was an important value of the NFL, and the protest was disrespecting that value. Although he now says that Black lives matter, Kaepernick’s absence from that apology makes that statement seem questionable.‍

Performing “Lift Every Voice and Sing” may seem like a step in the right direction, but this actually has nothing to do with what activists across the country are demanding. These demands include changing the names of the Washington D.C. and Kansas City teams, which perpetuate racism. Singing a song before football games will not do anything to address the systemic racism that Black Americans face on a daily basis.

Instead of putting on a show, we ask that Roger Goodell and the NFL take real steps to acknowledge the racism that has existed within the League for years. These steps include apologizing to Colin Kaepernick for denouncing his peaceful protests in the past and inviting him to play for the NFL again, getting team owners to acknowledge racial justice, and even divesting from corporations that hurt Black Lives. Until these demands are met, we will not believe the NFL when they say that Black Lives Matter.‍

Italicized lyrics are from “Lift Every Voice and Sing” by James Weldon Johnson and J. Rosamond Johnson