Palm Trees and Concrete: Dreams of a Dominican American

My journey of acceptance as a Dominican American teenage girl 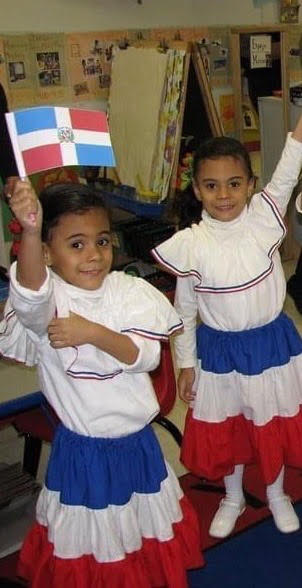 “I’m American,” I would say when asked about where I was from.

“But my parents are from the Dominican Republic,” I added afterward.

My parents had always told me stories of sunny days, palm trees swaying in the breeze, fresh mangoes and passionfruit, blooming flowers, beach days full of fresh fried fish, having a song for everything (yes, everything), and a joyous lifestyle marked by tan lines and curly hair. It was a stark contrast from the concrete-filled, black and grey, skyline decorated town I grew up in. I lived in an apartment, not a house. I ate fruit from the supermarket, not from a tree in my nonexistent backyard. I only went to the beach once or twice a year, not every weekend. I knew I could not live the vibrant life my parents described, so I was not worthy of being called Dominican.

As I grew older, the list of unworthiness grew to be more serious. I could not dance bachata or merengue, and I stuttered when I spoke Spanish - I was too quiet and shy to be Dominican. So I learned as best as I could, playing Romeo Santos and Juan Luis Guerra, dancing- no, more like waddling- around my living room, my flip flops (or my chancletas) making a CLANG CLANG CLANG sound on my wood floor. Spanish class became a sport for me. Even though I already spoke Spanish at home, I drilled “¿Dónde está la biblioteca?” into my head regardless. Learning about Dominican history was my obsession: las Hermanas Mirabal and Juan Pablo Duarte lived in my mind. I studied with the same determination as a football player preparing for the Superbowl, except my prize was much more significant than a trophy: it was acceptance.

No matter how many living room dance sessions I had, I was still faced with the judgemental statement: “Tu no eres dominicana de verdad.” You are not a true Dominican. But why? I had done everything I possibly could: I knew every Romeo song, I now danced instead of waddling, my Spanish improved tremendously, and I was loud and outgoing - what more could I do? ‍

“Tienes privilegio.” You have privilege. ‍

And as much as it hurts to swallow my pride and admit it, they are right. I will never understand life as a “real” Dominican. No amount of mangoes will erase the violence and crime the Dominican people fall victim to. No amount of beach days will wash away the fear of having everything taken away from you by either the government or your next-door neighbor. The sun can not blind them from the hardships faced on the island. The concrete beneath my feet protects me. The skyline reminds me of opportunity and success. The clouds of the American dream hover above me, the rain of wealth pouring on me.

“Go back to your country!”

“Speak English; this is America!”

Being Dominican and American is all I’ve ever known, but both groups rejected me. Where would I go now? Who was I supposed to be now?

The same concrete that protected me in my youth now hurt me, leaving scabs on my knees and publicly displaying my injury. The skyline that once reminded me of opportunity also reminded me that you must be of a particular skin tone to get there. The rains of wealth and success now became a drought, because no matter how much rain fell, it could not erase the fact that I am a tan-skinned, Spanish speaking, naive girl from a low-income town.

The cries of protests from both the lands I loved could not overpower my own, as I asked myself:

Who do I want to be?

The need for acceptance made me realize that looking for it in others would not satisfy me. The cries inside me could only be tamed if I took a step towards accepting myself.

I may never hear the tropical breeze welcoming me, and I may never see the sun embrace me, feeling its warmth, almost saying, “You belong here, Chelsea.” I may never fall in love with the sweetness of the fruit of my island. I may never hear the waves crash as if to say “Welcome home,” but the image my parents place in my head will forever be a part of me, and will forever be a part of my unrequited love with an island that will never know my name and will never see me as an equal.

The concrete below me may hurt me and bruise me, but my scars will be permanently etched into my skin, a reminder of my battle to be seen. The skyline will torment me of a dream that I’ve been told that I will never reach, but will serve as a reminder to silence the voices of doubt. And the drought may last forever, but my thirst will not allow me to stop fighting.

My mother’s sancocho will keep me warm in the cold political climate we were forced into. Dreams of a vivid, colorful island remind me that I have so many colors to bring to this black and grey world. My father’s American dream will give generations of our bloodline resilience and hope.

And I will have my image, a bizarre one, where palm trees can grow on concrete. A world where rainbows can look beautiful against a black and white scenery, where you can find peace in a whirlwind of doubt and chaos. A world in which I can love the two parts of me equally: la Dominicana de verdad and la gringa.