Arjun Verma
and
October 10, 2020
in
World
Courtesy of The Atlantic 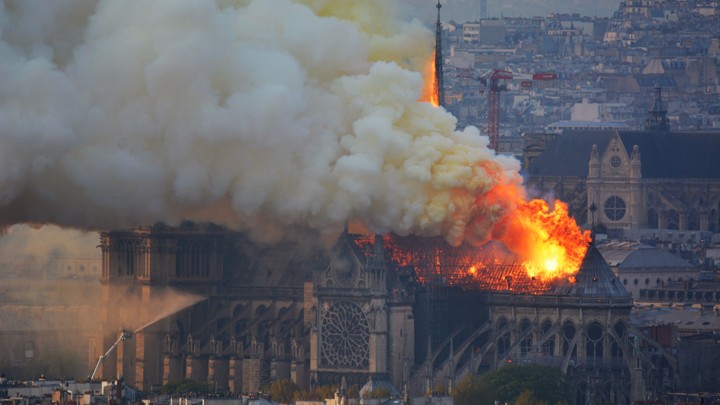 When news broke of the raging fire at the Notre Dame cathedral in Paris, France, millions around the world fell into shock as they watched the timeless monument slowly burn away right in front of their eyes. No one could believe that the building they had their wedding in, visited when they were a child, or been baptized in was set ablaze within a matter of minutes.

Once the blaze had been put out by hundreds of firefighters, the fundamental question of reconstruction came to the front of the discussion: how could the cathedral be rebuilt - and with whose money? Reporters had been speculating about the extent of the damage, but one thing was certain: a great amount of the building needed to be restored.

However, French aristocrats soon poured in millions - in some cases, hundreds of millions - to restore the building. At the same time, President Trump independently offered to assist in the restoration effort. While there may seem to be nothing wrong with people donating to a cause that they feel to be important, it is a candid indication of where our priorities lie.

Within hours, over 600 million euros worth of pledges had come in for the purpose of rebuilding Notre Dame due to the donations of billionaires. Yet, according to journalist Simon Allison of South Africa, “just 15 million euros have been pledged to restore Brazil’s National Museum,” which caught fire in September 2018 and lost over 92% of its items. Likewise, in the United States, burned and damaged churches in Louisiana were barely funded despite being in a similar situation.

It is not a coincidence that all of these monuments are primarily used by nonwhites; in fact, Allison even referred to it as “white privilege.”

While the actions of these French billionaires may seem dedicated to a positive cause, it  more represents their blatant disregard for the material struggles of actual people in favor of donating to a building that already has more than sufficient funding. Instead of donating to the families and children in Yemen who are starving in the middle of a humanitarian disaster with constant Saudi airstrikes, they chose to cultivate their reputation as “generous” and “patriotic” people. While Trump was pledging American assistance to preserve “Western civilization,” American citizens continue to suffer without water or adequate assistance in Flint, Michigan and Puerto Rico.

All of this is a major reason why movements like the Yellow Vests, an organization protesting social inequality in France, have gained so much traction in modern day society. When billionaires and the elite are so glaringly hypocritical about the lack of resources for social justice, ordinary citizens have a right to be enraged. There can be no explanation as to why a mere building, even one as symbolic as Notre Dame, can be considered more important than the lives of actual suffering human beings. Anything else is a classist dehumanization of people simply because they have less money or are less fortunate.

When elites make conscious decisions to divert much-needed funds for simply a symbolic gesture of generosity, they fuel the very narrative they are supposedly trying to fight. If billionaires actually wanted to do good for the community or even their country, they would be better off by directly helping those very people instead of focusing on the glamor.