From the plethora of issues that burden our world, climate change is and must be treated as if it is at the forefront

Anushri Dwivedi
and
May 8, 2021
in
World
Courtesy of EcoWatch 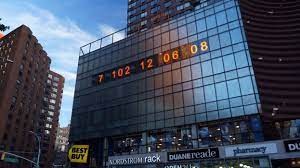 From the plethora of issues that burden our world, climate change is and must be treated as if it is at the forefront. There is no doubt economic, political, and humanitarian issues directly impact our world, yet climate change has neglected to receive the attention that it deserves. If our actions do not change and treat the crisis with haste, climate change has the potential to quite literally end our lives before Gen Z comes of age to build their careers and families. There is extreme urgence and action needed to save our planet now.

Let’s begin with New York City, US. It is one of the coastal cities at the greatest risk of facing climate change’s detrimental impacts in coming years. The city faces threat because of its coastal geographic location in addition to dense population; rising sea levels, increased precipitation, extreme heat waves, massive flooding and coastal storms pose immense chances of damage to infrastructure, lives and land. Additionally, sea levels in New York City have risen one foot since 1900 due to the expansion of warming ocean water and “scientists projected by 2100, that sea levels among the city’s coastlines could be 18 to 50 inches higher than today. They found that average temperatures on the hottest days of summer have increased ranging from .01 to .07 degrees per decade, depending where measurements are taken in the five boroughs.”

Much of the power to enact change lies in Washington. Imposing carbon taxes nationwide, banning the burning of coal, and setting vehicle emission standards are just three of the numerous solutions that could potentially be implemented. However, as clear and urgent the crisis may be, Washington has yet to step up to the plate. The failure of national leaders to take and regulate any significant action has left New York City on its own.

Recognizing the lack of action and urgency from Washington, some argue that New York City must be more aggressive in creating change; however, there are already blueprints in place to make the necessary and historic changes needed. In 2005, Mayor Bloomberg led the city to begin taking important steps to reduce its carbon footprint, prepare for the worst effects of climate changes and establish policies that were all continued under Mayor De Blasio. The most influential legislation with the greatest impact was released in April 2020 when the New York City Council passed the Climate Mobilization Act, which required buildings over 25,000 square feet to reduce greenhouse gas emissions 40% by 2030 and 80% by 2050. To ensure property and company owners would comply, most large buildings in the city would have to make major investments to retrofit windows, insulation and heating systems. This Act also mandates many residential and commercial buildings be equipped with solar panels, wind turbines or green roofs.

Furthermore, New York City’s buildings account for 67% of greenhouse gas emissions and are the leading contributors of the city’s carbon footprint by far because of the amount of fossil fuel energy they require. Overall though, bills in the Climate Mobilization Act have been able to take huge strides to reduce those emissions and issue grand fines to buildings that won’t comply. New York City’s urgency and leadership in beginning a path to recovery is immensely appreciated and applauded but unfortunately not enough.

Unfortunately, phenomenal legislation has to endure the politics of climate change before being agreed upon. Therefore, the legislative package embedded in the Climate Mobilization Act has been opposed by the real estate industry, arguing that these changes would drive up residential and commercial rents to cover costs of changes that buildings must make. Opponents, with reason, are worried about the economic states residents and companies will be put in, but an issue as pressing as climate change begs for collaboration and compromise to be mitigated. Only with widespread cooperation can a solution be achieved.

In addition, climate activists are invigorated by New York’s recent actions and hope to catalyze a grassroots movement for a more aggressive approach nationally. Referring back to Washington, since 2008, oil and gas industries have spent at least $125 million per year to lobby members of Congress. Up to now, they have succeeded in blocking efforts to impose a carbon tax decreasing carbon emissions and have loosened regulations on oil and gas and on automobile emissions. Nevertheless, perhaps New York’s biggest contribution to climate action through politics on a national stage is sending Rep. Alexandria Ocasio-Cortez to Washington. She has championed legislation that ties climate initiatives to various health and economic justice measures. Ocasio-Cortez and her Green New Deal have received significant attention and have been successful in bringing climate change into the national spotlight. Through valuing and creating solutions satisfying economic, humanitarian, political and climate needs, we need more politicians with the dedication and drive that she has.

Now, for what might be one of the most extraordinary creations in New York City that has caught the public eye and media by storm, is the Climate Clock in Union Square, New York. It was originally made to tell hours, minutes, and seconds to and from midnight but people did not understand how it worked, so they suggested it be adjusted to track acres of rainforest ruined each year. However, two artists (Gan Golan and Andrew Boyd) found an innovative display relating to the people’s requests. Golan came up with the idea to publicly illustrate the urgency of the climate crisis in 2018 and enlisted activist Boyd to help out.

From there, on September 17, 2020, Union Square had adopted a new ecologically sensitive mission with the clock now measuring the urgent window of action to prevent global warming effects from becoming irreversible. The goal of creating this large-scale clock came from the realization of Boyd and Golan that a climate clock would have the most impact if it were in a public statue, on a building, so all citizens passing by could not miss it. The developer who owned One Union Square South stated, “This initiative will encourage everybody to join us in fighting for the future of our planet.”

Boyd and Golan also set up a website along with the clock that includes an explanation for climate change statistics and a link to a report by the intergovernmental panel on climate change. The website also tracks the growing percent of the world’s energy supplied from renewable sources and provides directions on how to build individual small, low-cost clocks. Overall, in 2018, global warming is likely to reach over 1.5 degrees Celsius (over pre-industrial levels) between 2030 and 2052 if it continues at a current rate. With this level of warming comes increased damage to many ecosystems and an estimated $54 trillion in damage. The Climate Clock was created to spotlight these statistics and encourage leaders and ordinary citizens to take action.

It has been almost 8 months since the Climate Clock was installed. Now, we must reflect and assess its successes to determine its effectiveness. This begs the question: has the Climate Clock substantiated or encouraged any change to occur in the past 6 months? Let’s take a look.

Since September, a determining factor in US policy on climate change has been our president; however, since the election of our current president, President Joe Biden, immense changes and plans have been set in place, reassuring foreign allies and the American people that we are making efforts to mitigate this issue and help protect our environment.

Since his inauguration, the United States has returned to the Paris Climate Accord in February of 2021. President Biden is determined to curb US greenhouse gas emissions and is heavily encouraging other nations to follow in our footsteps. Just hours after his inauguration, President Biden sent a letter to the UN, jump-starting the 30-day process to rejoin the 2015 accord that had been brokered by former President Obama.

President Biden and his administration have admitted that despite only having left the accord for 4 years, the US has a long way to go to make up for its absence. President Biden rolled out a firm and progressive plan of action aiming to increase “US commitments to reduce emissions while pressing countries such as China and India to curtail their construction of coal powered plants and at the same time, persuading Brazil to preserve more of its precious Amazon rainforest that continues to be destroyed daily. Additionally, the White House will host a summit for world leaders on April 22, 2021 (Earth Day) which will serve as a prelude to the critical UN conference in Scotland in November. Nations will be expected to arrive in Washington with climate pledges that exceed the ambitions of the Paris accord so solutions can be discussed and ready to implement.”

President Biden’s plan is very impressive, especially due to having only been in office for 4 months so far; however, he does have to deal with a polarized congress and other competing factions in America. The deep divide in American politics has made it difficult to pass legislation on such controversial topics but nevertheless, President Biden is making progress.

Another important party to include in the conversation is the citizens. While New York City has better positioned itself to be an urban leader in mitigating climate change, implementing their potentially controversial plans to make the city more resilient will require the citizens to be more aware of the stakes at hand. Their support will also be a necessity.

Hurricane Sandy in 2012 served as an eye opening warning for New Yorkers. It exposed widespread weaknesses in the power grid, networks, sewage and water systems and transportation. Younger residents of New York City, who will have to face the consequences of putting off actions currently, have leaped into battle with significant numbers using protests, education, lobbying tactics and the ballot box to advocate for change. The young generation feels as if it is their defining cause because older citizens are advocating in much less margins as they believe the issue won’t affect them in their lifetimes.

Despite great strides, amazing leadership, new technology, and legislation that has led to progress in combating the climate crisis, the world is still far behind where it needs to be to keep warming below a global average of 1.5 degrees Celsius above pre-Industrial levels. Now is the time nations can rein in their emissions and prevent problems from worsening. Specifically, for the US, Trump’s case of federal regulations on carbon pollution will make it harder for President Biden to reach any climate goal by 2025 but with affirmative action; however, 2030 remains a possibility.

The bottom line is all countries, citizens, leaders need to collaborate to solve this issue. All need to sharply raise their emissions-cutting goals ahead of the summit with the US needing a new bold promise. Laurence Tubiana, Chief Executive of the European Climate Foundation and architect of Paris Accords, claims we need to make the “target at least 50% greenhouse gas cuts on 2005 levels by 2030 -- ideally more.” Compromise and collaboration will be our saving grace, so please, educate your children, classmates, co-workers and everyone you know. You have the power to save the Earth, to save your future, and to save our future.