After almost six years of public hearings and overcoming stiff regulatory hurdles, the Canadian energy company, Enbridge, finally managed to launch its construction of a new Line 3 through northern Minnesota in December 2020

Varshini Sathiyaseelan
and
July 3, 2021
in
Justice
Courtesy of EarthBeat 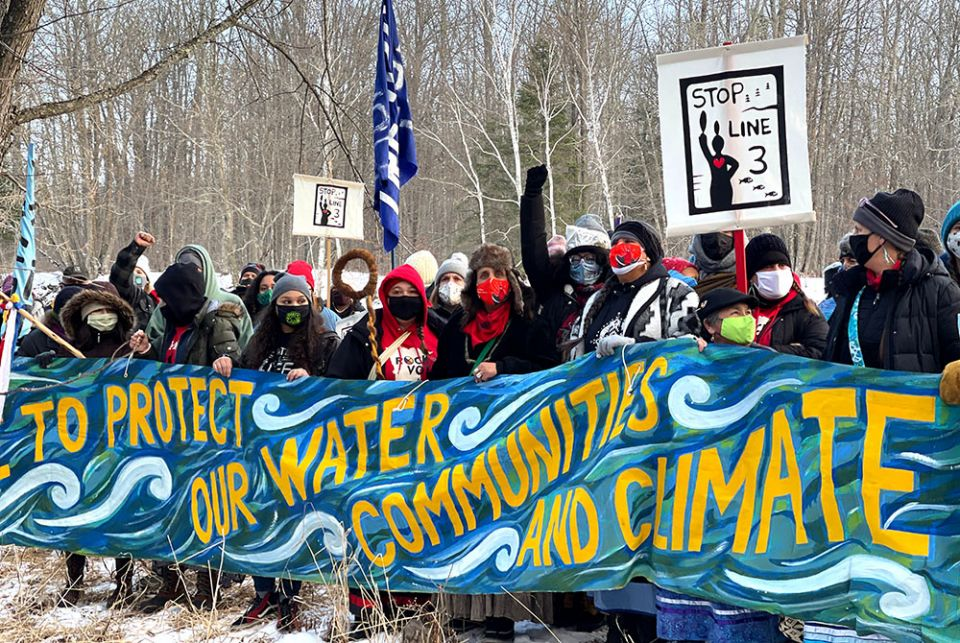 After almost six years of public hearings and overcoming stiff regulatory hurdles, the Canadian energy company, Enbridge, finally managed to launch its construction of a new Line 3 through northern Minnesota in December 2020. Rebuilding 337 miles, Enbridge aims to create “a safer and more efficient pipeline” to send tar sands crude oil from Western Canada to Superior, Wisconsin. Indigenous leaders and environmental activists, however, have vehemently opposed this pipeline and similar construction projects, as the development of this Line 3 poses immense ecological threats to the region despite Enbridge’s tagline.

The new pipeline aims to replace the current aging Line 3, corroding and requiring extensive maintenance at present. This new, ‘modern’ pipeline would transport nearly 800,000 barrels of Canadian oil across northern Minnesota every day, nearly twice as much as the current one. The $3 billion pipeline is about 60% complete as of now, with only the final stretch left. Enbridge has already completed pipeline reconstruction in Canada, North Dakota and Wisconsin, leaving Minnesota as the last territory to build through.

From April 1 through June 1, work on the pipeline was halted due to road and environmental restrictions. Over the past weeks, the full workforce has returned as direct pipeline work resumes with over 4000 construction workers on site. On the other hand, opponents — including environmental groups, several Ojibwe tribes based in northern Minnesota, and the state Department of Commerce — have mobilized for large-scale protests and civil disobedience.

One prominent opponent, Winona LaDuke, founder of the Indigenous-based environmental group Honor the Earth, said she expects thousands of people from across the state and country to join the protests along the route in northern Minnesota.

"We are exhausting our resources. This is really a dire situation that the governor and Enbridge have put us in," LaDuke said, referring to the Minnesota Pollution Control Agency (MPCA), which granted water and wetland permits for Line 3.

To locals, the ringing noise of construction on the reservation “represents an insult” and a direct challenge to Indigenous land. On the Fond du Lac Reservation, where Enbridge struck a deal with tribal leadership to replace the existing pipeline route, Indigenous rights activists, who call themselves “Water Protectors”, bought property next to a work site and set up camp to oppose the construction of Line 3. The Water Protectors' strive to resist Line 3, even by putting their bodies and their lives at line by chaining their bodies to equipment to bring attention to their cause. This is the case not only on the Fond du Lac Reservation in Cloquet near Duluth, but also across Enbridge Line 3 sites in central and northwestern Minnesota.

Local authorities have arrested hundreds of activists from various protest sites, especially those who support ongoing legal challenges to stop construction, which protestors have called a threat to Indigenous culture. However, it has not deterred people from resisting the pipeline construction. Activists claim that proceeding with the pipeline would worsen climate change, and increase the possibility of oil spills in a water-rich part of the state while threatening treaty rights of the several different Ojibwe communities who retain the rights to hunt, fish and gather wild rice on lands off their reservations.

Celebrity allies of the movement, Jane Fonda and Rosanna Arquette, were also in attendance at recent protests, and spoke to the protesters during the Treaty People Gathering on June 7th. “They have so many bodies of water that they are going to try to put pipelines under, and we have to give them heartburn at every single one," said Fonda, explaining the reason for the wave of protests at multiple locations.

It is evident that allies are leading an escalating campaign against Line 3, fighting alongside an Indigenous-led frontline resistance. The widespread allyship displayed thus far is an important factor to winning several key legal victories in the fight against Line 3, delaying this project for over five years now. Allies have demonstrated strong support by signing up to engage in campaigns, protests, and singing the Line 3 Pledge of Resistance.

Mutual aid by allies has also spiked, with increasing support for Indigenous organizers and communities negatively affected by pipeline construction. Effectively, it appears that the resistance can only grow stronger, given the consistently rising movement against Line 3.

Enbridge recently released a statement that said the damage done by the protesters at the pump station was "disheartening" and 44 workers needed to evacuate the job site at the pump station, including 10 employees of a native-owned contractor in White Earth.

Nonetheless, after six years of regulating and permitting review, it has become clear that nothing can stop the people from protecting their homes, their land, and their way of life. As the Biden administration has recently come out to back the pipeline construction, protests are ongoing, stronger than ever, and this pipeline will certainly not move forward without facing immense resistance.