Actor and writer Mindy Kaling, best known for her work on the shows The Office and Never Have I Ever, has been outspoken about her Indian ethnicity and the way it impacts her work.

Aairah Koujalgi
and
January 8, 2022
in
Representation
Courtesy of Mashable 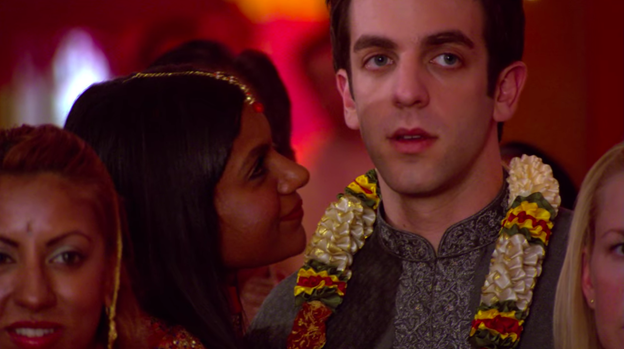 Actor and writer Mindy Kaling, best known for her work on the shows The Office and Never Have I Ever, has been outspoken about her Indian ethnicity and the way it impacts her work. In her time as a writer on The Office, Kaling portrayed bubbly Kelly Kapoor, and co-wrote many fan-favorite episodes. One particular episode that she wrote that stands out is titled “Diwali”. For those who don’t know, Diwali is the Indian festival of lights celebrated over 5 days. Kaling’s episode was the first depiction of Diwali on an American comedy series. Although the episode was not centered on the festival, small hints of Indian culture could be found throughout the episode, such as leaving shoes outside the house and having primarily vegetarian food. Kaling admitted that while “[she] [didn’t] know very much about the holiday…the bad experience of being Indian-American and talking about how [one didn’t] know very much about the holiday kind of became a big part of the episode, which [she] loved.”

During her work on her own show, The Mindy Project, Kaling strove to show diversity, but not have it be the focus of her work. Many white executives at the TV networks, however, wanted the opposite, and instead for her Indian ethnicity to drive the show. “They felt more comfortable with it being about an Indian woman who felt out of place in America, educating white people.”

Recently, Kaling mentioned that she would be voicing Velma on the new HBO Scooby-Doo Velma animated series, which features the character Velma as Indian instead of white. Although the reception was mostly positive, fans of Scooby-Doo took to social media to voice their negative opinion on Velma being Indian. Kaling responded to the backlash the show was getting for the ethnicity change, asking why people couldn’t imagine the character Velma as Indian. A smart, nerdy girl with terrible eyesight is exactly what Velma is, and according to Kaling, it’s not hard to imagine someone like that as Indian.

While Kaling’s work has been applauded, it has also been met with criticism and backlash towards her portrayal of POC characters. Never Have I Ever, a show co-created by Kaling and Brooklyn Nine-Nine’s Lang Fisher, portrays Maitreyi Ramakrishnan as Devi Vishwakumar, an Indian-American high-schooler living in the San Fernando Valley. When the show was announced, many Indian-Americans, including myself, had exceedingly high expectations for the representation in the show. However, for many, the show is extremely problematic and portrays foolish stereotypes that stray from what Indians in America really are. Devi’s mother Nalini is an Indian immigrant and dermatologist and is portrayed as someone who isn’t aligned with the times and customs that people in America follow. This potentially pushes a harmful narrative about people from India as a whole, and reinforces stereotypes that have long been associated with people from India. Another critique of the show stems from the way it depicts South Indian culture, by combining South Indian and North Indian culture together. At a seemingly South Indian event based on the way the characters are dressed, Hindi songs from Bollywood films are played throughout the event instead of South Indian songs.

These criticisms of Kaling’s work are valid, and show how even while furthering representation, her depiction of Indians in her work may be considered backward by some members of her audience. However, Kaling has also opened a pathway for more POC actors and writers to carve their own path in Hollywood, and for that, she remains a pivotal part of the journey for representation.