Varshini Sathiyaseelan
and
May 15, 2021
in
Race
Courtesy of Online Journalism Awards 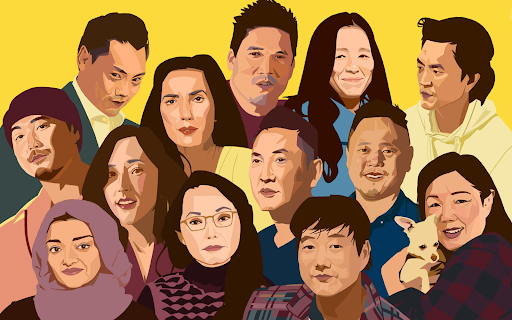 Since 1979, May has been a dedicated time to celebrate Asian-American/Pacific Islander (AAPI) heritage, but it wasn't until 1992 that May was officially designated as AAPI month. This awareness month was established to commemorate the immigration of the first Japanese people to America in May 1843 and the completion of the transcontinental railroad in May 1869 that was made possible by thousands of Chinese laborers. AAPI month highlights and focuses on the heritage, stories, contributions, and experiences of the Asian and Asian-American communities.

AAPI heritage month holds different values and meaning to everyone - for students, it can be a time to gain exposure to new stories and traditions; for educators, it offers an opportunity to celebrate our AAPI leaders who have faced oppression and fought for liberation in many different ways throughout history, but often remain unacknowledged in history textbooks and curriculum. What remains the main purpose of AAPI month is that it acts as a springboard to learn more about, and stand in solidarity with the AAPI community. Most importantly, it is a month of reflection and awareness.

What makes it even more important to be informed of the AAPI heritage, is the prevalence of the community as well as the nuances that are often overlooked. AAPIs in America fall all across the socioeconomic spectrum, yet the more struggling subgroups remain largely invisible. Moreover, the false, cookie-cutter “model minority” stereotype alludes that all Asians are privileged and academically inclined, effectively working against the AAPI community by ruling them out against other marginalized communities, and frequently undermining the significance of the AAPI community in conversations discussing important topics like ending educational equity and working towards social justice.

In the AAPI community, bullying is often compounded by cultural, religious, and linguistic barriers that can keep them from seeking help. Moreover, data reveals that over the past year alone, even amidst the deadly Covid-19 pandemic, nearly 3800 anti-Asian hate incidents have been reported - which include shunning, usage of slurs and physical attacks - with a disproportionate number of attacks directed at women. Verbal harassment and shunning were the most common types of discrimination, making up 68.1 percent of the total. More than a third of incidents occurred at businesses, the primary site of discrimination, while a quarter took place in public streets.

Asian women report hate incidents 2.3 times more than men. A further examination pointed out that the verbal harassment that women received reflected the intersection of racism and sexism. Women have always dealt with harassment from men and public safety issues in general but the pandemic has only provided yet another “excuse” for people to target AAPI women more under the false accusation and link to the virus. The wave of violence directed at AAPI seniors at the beginning of the year, particularly the graphic attacks that have been captured on video, have likely prompted more attention from the community and mainstream media. It had definitely galvanized more vocal responses from victims as well as activists. It is also catalyzing calls for action and initiatives as evident from elevating the vicious Anti-Asian hate crime issues to be addressed by President Joe Biden in his first national prime-time address and the signing of a memorandum which issued guidance on how the Justice Department should respond to the heightened number of anti-Asian bias incidents. The constant efforts of both the AAPI community as well as activists in the form of generating subway posters, allyship, leveraging social media and staging Zoom webinars have manifested rapidly this year, particularly during the AAPI month. This shows their perseverance to dispel hate crimes against the AAPI community and their combat towards achieving better visibility of the often overlooked AAPI community.

It is our charge and hope that all AAPI students, families, and community members will be recognized, supported, and affirmed in our diverse identities and worldwide. For that, AAPI heritage as well their significance should be made known to all so as to unlearn any existing biases and to live in harmony.