Global warming is a deeply threatening issue in itself, thus when racism is integrated with its adverse effects, people of color are pushed to the forefront of the battle—unequipped, vulnerable, and defenseless.

Anushka Sonawala
and
September 12, 2021
in
Race
Courtesy of the Washington Post 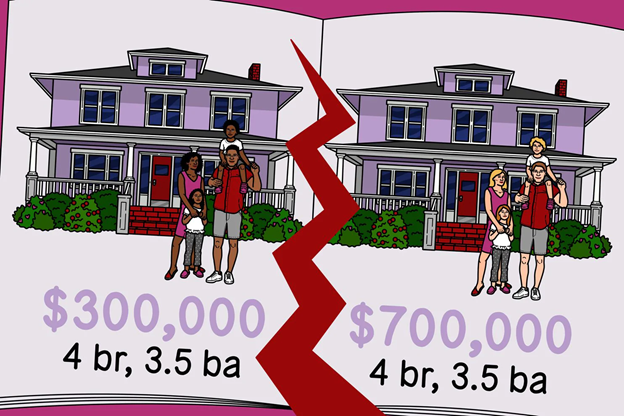 An issue at the crossroads of racial segregation and climate change is environmental racism and redlining. Redlining is the prejudiced, immoral practice that rejects services for targeted groups of residents in neighborhoods, especially on the basis of ethnicity and race. Redlining proves to be a bigoted practice because it dismisses an individual’s qualifications to receive amenities. The real estate industry and the U.S. government are allowing systematic racism to thrive by denying black families housing in their preferred areas of residence. Black people are confined to specific areas and often aren’t granted home loans outside of them.

However, redlining isn’t a recently introduced scheme. It dates back to the US government’s systems in the 1930s that encouraged racial segregation and xenophobia. The Home Owner’s Loan Corporation printed maps and marked neighborhoods that they considered “perilous” or “threatening” in red, and interestingly enough, the hazard levels were determined by the population of Black people living in those vicinities. Evidently, this practice has sustained itself to date despite the implementation of the Fair Housing Act of 1968. Due to the normalization of institutionalized racism in the US, the outlawed practice still continues—and its effects are worsening.

Studies have found that neighborhoods that were redlined were also facing considerably high temperatures as compared to other unmarked neighborhoods. Particularly, a study conducted amongst 108 urban areas by the Science Museum of Virginia and the Portland State University showed that almost every redlined neighborhood of the cities surveyed was noticeably hotter than non-redlined neighborhoods. Previously redlined and segregated districts seem to have fewer natural spaces and less access to parks. These redlined areas serve as urban heat islands due to the excess of heat-absorbing materials like concrete and lack of greenery.

An increase in heat levels can lead to lower mortality rates and health issues, but the inherent racism that is also entrenched in healthcare systems makes medical aid a challenge. Moreover, communities that are redlined are disproportionately affected, especially during climate crises such as the unexpected Texas snowstorm. Food deserts, a lack of provisions, proximity to pollutant-producing factories, and climatic inconsistencies make neighborhoods that face severe environmental racism unprepared for unprecedented calamities. These communities are inopportunely predisposed to intense and long-lasting distress, and cannot receive adequate aid relief because of discriminatory policies.

Unfortunately, environmental racism and redlining affect Black and Brown people of all income backgrounds. Middle-class Black people may also be susceptible to real estate racism even if they match all required qualifications for services and housing. The embedded racist behaviorisms in these neighborhoods also kindle over-policing in both redlined and non-redlined areas. The popular cop show Brooklyn 99 displays an example of wrongful racial profiling in a white-dominated neighborhood in the episode “Moo Moo” (S4:E16). Racial profiling, stereotyping, and wrongful accusations increase the chances of police brutality and unsubstantiated criminalization against people of color.

The racial wealth gap, systemic inequity, and unfavorable living conditions, combined with climate change and pollution, put residents of redlined communities in a tough situation. Social media, hashtags, and reposts won’t help people of color out of this condemnable system. Environmental racism and real estate racism need to be tackled at their roots. Discriminatory zoning laws need to be lifted, the Fair Housing Act of 1968 requires further enforcement and renewal, and the police need to be defunded so that a better budget allocation program can be instated. Global warming is a deeply threatening issue in itself, thus when racism is integrated with its adverse effects, people of color are pushed to the forefront of the battle—unequipped, vulnerable, and defenseless.