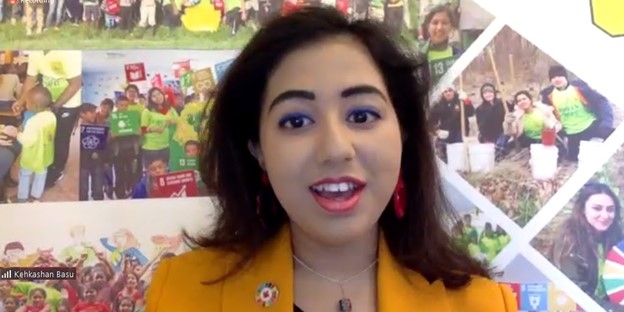 For the last two months, we have been continuously speaking, arguing, listening, and advocating for climate justice. We have been expressing our concerns over the unwillingness of world leaders to take strong and immediate action against climate change. Our voices have been relayed by the mainstream media that causes tingling in the hearts of 7 billion people and breaks out their dismissiveness towards the constant warning of climate scientists that our world is entering into a deadly era. We all are now part of a significant climate movement; every one of us has a unique background and blunt mark of climate injustice upon our face. Although I feel that our campaign still couldn't get its full color, we still have callousness to bring the most vulnerable communities into the spotlight, go to the root level and understand the true story of injustice. I was curious to know answers to some of the arising questions of our time and looking for the right person to ask.

I then got connected with several renowned climate activists of the 21st century, their age ranging from 17 to 65, and started interviewing them to learn their honest opinions over climate movement and its reality. Recently, I had an opportunity to sit for a short discussion with Ms. Kehkashan Basu, a climate reality mentor and founder president of innovative social enterprise Green Hope Foundation. The foundation provides over 225,000 young people in 25 countries a networking platform to engage in a sustainable development process and mitigate climate change. The central theme of our conversation was "Appropriateness of today's climate solutions and methods," which later turned into discussing climate justice in the understudied and marginalized colonies. She clearly stated that "Unless we start working on a very ground level and acknowledging the real changemakers of our societies, we couldn't believe that our climate activism has been truly inclusive in its nature." Now, let's enjoy some magnetic moments from this conversation.

Me: Ms. Basu!  Since 1990, if we count officially, the concept of climate activism has been starting to spread out across the globe. And we have seen grassroots protests and strikes, which many people from different backgrounds have attended. But from your perspective, do you agree that over the past few years, climate activism has grown to be a genuinely inclusive movement?

Ms. Basu: I don't think we have achieved this milestone. Until now, climate activism has only been what mainstream media always showed us; strikes, protests, campaigns, etc. But there's still a big part of this worldwide movement uncovered like we still couldn't recognize the real heroes who have been pumping up this climate change movement from root levels, we still have not any localized plan to take actions. When someone goes to inspire these root level communities, they most of the time bear a westernized version of an action plan in their minds that invokes locals to go over some reconstructive programs like awareness building, conventional arrangement of weekly discussions, the random exercise of technology and advanced machinery in a very short time that it becomes quite difficult for them to cope with and implement in that underdeveloped life position. So, what I suggest to make this movement effective for everyone regardless of their location in the world map is to keep us concerned about the practicality of the western hegemonic ideologies regarding climate change in our own and own communities and localize the actions as well as not just hover around the surface level to understand the efficacy of our solutions but touch the ground level and feel how suitable our proposal is and how prepared we are locally.

Me: Most of the popular discourse surrounding the climate crisis comes from the media giants and colonial interests whose voices we've always heard, but do those conversations sound different from people of different marginalized groups?

Ms. Basu: Yes, definitely. Climate movement has been going on for several years, and since the very beginning, most of the concepts around this transition have reflected Western hegemonic attitudes. And as a result, we've also been used to the ways and methods of protest that western media telecasted for being flashy enough to draw attention. I don't say they are worthless. But it often restrains our capability to think outside the box and makes us understand that these are the only ways to gain climate justice. And for our misunderstanding on the effectiveness of common solutions in the context of our societies, the works of marginalized groups have often been overshadowed, and we miss the great opportunities to localize the solutions. So, it's very important to hear their voices, and by listening to them, at the end of the day, we can get to know what we can do to ensure our climate justice and for those who have always been blaming others for their misfortune.

Me: You, as the founder of Green Hope Foundation, often got chance to go to the under studied and underrepresented communities in different parts of the world who are most vulnerable to the climate crisis, but there are lots of gaps and unwillingness in bringing them to the spotlight of media and pave the way of climate justice from both governments and climate activists. Firstly, do you think this unwillingness has been growing into a passion for young activists? Secondly, what are the opportunities you see to ensure climate justice for these underserved communities?

Ms. Basu: I believe that young people, despite having continuous disagreements on their adopted policies and their activities regarding climate change, are very passionate about bringing those underserved people to the world's ideas and giving them the floor. Our Green Hope Foundation also acts towards the same mission that we work on the very ground level and drive the unheard voices to be heard. I strongly believe that we need to work together, not individually. Another important point is to make all the relevant data to these understudied groups available. We may easily start taking action if we have data about their gender, age, social determinants, educational status, and accessibility through modern life components like technology. Because then we'll be able to understand what kind of steps should be included in our planning. For instance, if we know that the area we have gone to has very little access to education, then it's possible that they didn't know much about SDGs, so helping them to get access to education and letting them know what SDG is may be our first attempt. In this way, we need to get rid of following just one-sided solutions, recognize the real changemakers, and build solutions upon the local status.