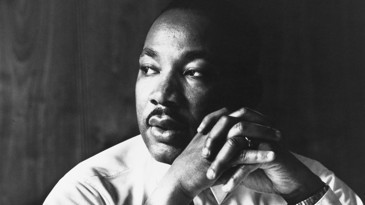 Throughout his life, Dr. Martin Luther King Jr. had a dream, not only to desegregate America, as the media has portrayed it, but also to grant equal opportunity to all. To raise the voices of those who were not heard. To fight for what he believed to be just through direct action.

While he is remembered for such rhetoric, King also left behind a legacy of non-violence through his speeches and protests. Over the years, however, his peaceful protests have been interpreted as being passive, when this was never his intent; instead, his non-violence spoke when others could not.

The first time King became involved with the Civil Rights Movement was with the Montgomery Bus Boycott in1955. This boycott lasted for over a year, with King persisting in spite of threats to his family and home, in spite of the hoses that were sprayed at him and the pain that he was forced to endure. His commitment to his cause was evident through his perseverance in the face of danger. This peaceful boycott was not passive at all; if anything, it made an aggressive push for change.

In 1959, King visited India’s Prime Minister Jawaharlal Nehru, along with other members of the Southern Christian Leadership Conference (SCLC). It was then that King began to believe that non-violent resistance was a weapon that the oppressed could use to fight for their rights. He realized that peace could be used as a tool for victory rather than defeat. This belief served as the basis for the movements he supported.

Perhaps the greatest outline of King’s ideology is his “Letter from a Birmingham Jail,” which was written as a result of his arrest at a demonstration in Birmingham. In his letter, King wrote that civil disobedience is justified when the law that is being broken is unjust, or “degrades human personality.” He also wrote that non-violent protests can create enough tension that a community is forced to address an issue. Throughout his participation in the Civil Rights Movement, King was sure to abstain from violence, relying on sit-ins and boycotts to spread his message. In instances such as the Birmingham demonstration, this ideology worked, since it caused social controversy over the unfair arrest of protesters. “Letter from a Birmingham Jail” explains King’s values and opinions in great detail and must not be overlooked in the search for his true legacy.

King wasn’t passive; he was strategic. He realized that, in the 1950s and even today, if a black person tried to fight back and the fight became violent, that would become an excuse that oppressors could use to further withhold rights from black people everywhere. He realized that, though revolution and agitation of social norms was necessary, he could make the most impact on the ground, with direct action, advocating for peace instead of hatred.

Martin Luther King Jr.’s legacy was never meant to be passive. It was instead meant to lay the groundwork for movements to come. In today’s demand for social change, activists and government officials alike must not forget about the non-violent resistance campaigns that have sparked successful change, must not forget about those on the ground, like King, taking part in the action and the fight to make our world a better place.

All it takes to start a movement is one dream.