They had been protesting the wrongful murder of Breonna Taylor, a Black woman whose death helped ignite national momentum behind the Black Lives Matter movement. 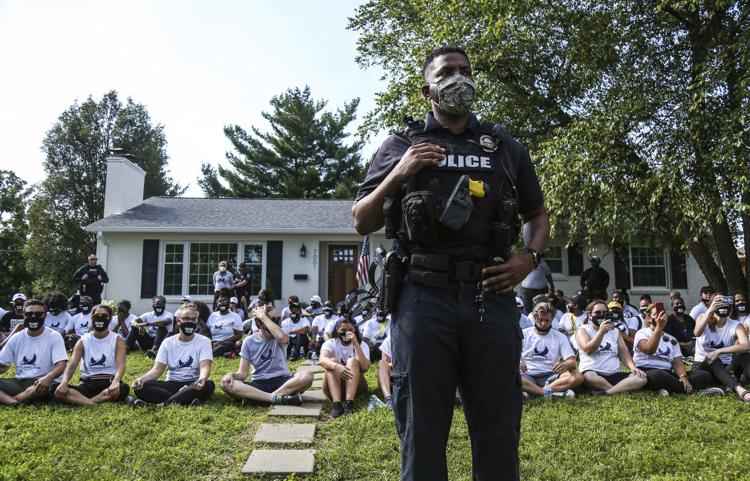 In Louisville, outside the home of Kentucky’s Attorney General, eighty-seven peaceful protestors were arrested on Tuesday. They had been protesting the wrongful murder of Breonna Taylor, a Black woman whose death helped ignite national momentum behind the Black Lives Matter movement.

Breonna Taylor, an EMT, had been asleep when Louisville Police Officers Myles Cosgrove, Brett Hankison, and Jon Mattingly executed a no-knock search warrant and shot Taylor eight times. In total, twenty rounds were fired into the home after Kenneth Walker, Taylor’s boyfriend, fired a single shot from his gun, which is legally owned, thinking his home was being broken into. The police failed to identify themselves according to Walker’s attorney. According to court filings from Taylor's family, reported by the New York Times, Taylor was alive for six minutes after she had been shot eight times and received no medical assistance. Later, the incident report filed listed Taylor’s injuries as “none.”

In the aftermath of the murder, Brett Hankinson is the only officer to have been fired, but protests are calling for all three officers to be fired and charged appropriately. The police chief claims Hankinson fired ten shots into Taylor’s apartment. However, Hankinson has appealed his firing. It is also worth noting that two women have come forward since Hankinson was identified in relation to Breonna Taylor’s murder with allegations of sexual assault. In addition, Hankinson has had two past cases of sexual assault thrown out, where he allegedly leveraged his authority as a police officer according to Vox. On top of this, he is involved in an ongoing case where he is accused of “harassing suspects with unnecessary arrests and planting drugs on them,” according to USA Today. It is beyond clear that Hankinson is an incompetent police officer who should not be trusted with power and the duty to protect others. And it is unacceptable that action for his repugnant record of abuse was not taken prior to the national attention he received for murdering Breonna Taylor as she slept.

The protestors had been peacefully sitting on the lawn outside the Attorney General’s house when police declared the gathering unlawful and arrested those at the protest. Protestors were charged with “attempting to intimidate the prosecutor,” which is a felony, according to AP News. Police claim the protestors were discussing starting fires; however, the protest remained peaceful and no fires occurred. The charges were later dropped against all the protestors, including a middle school principal, but the fact that they were charged in the first place is alarming. Several former prosecutors have said that the original charge was excessive and that the behavior and characteristic of the protests would not warrant such a serious charge. Yet, the Jefferson County Attorney Mike O’Connell said he supported the idea that the officers had probable cause. A felony conviction would have contributed to the disenfranchisement and suppression of these protestors' right to vote if they had been convicted. The power that prosecutors and police hold against those who speak out against their malalignment of justice is absurd.

Breonna Taylor’s family has demanded justice in the form of firing Brett Hankinson, Myles Cosgrove, and Jon Mattingly, along with applying criminal charges and revocation of their pensions among other reforms. However, the Attorney General of Kentucky, Daniel Cameron, has yet to announce any charges or even a timeline for when charges might be made. His recent engagement was called into question given the lack of progress made available to the public about the investigation. Taylor’s family is also demanding that the use of force in the Louisville Police Department be addressed. The Department is also facing questions over the killing of David McAtee, a business owner who was killed at his restaurant during protests in the area.

Taylor’s story has captivated social media, where people are still calling for justice in her name. There has been discourse over the “meme-ing” of her name and the potential disrespect it lends to her memory. There has also been discussions among prison abolitionists for how demanding justice in a carceral system legitimizes that system. There is also a renewed push for those calls on social media demanding justice to not just demand “the officers involved” are held accountable, but to also specifically identify Myles Cosgrove, Brett Hankison, and Jon Mattingly as responsible for the death of Breonna Taylor. Her legacy is one that has sparked numerous conversations and, hopefully, the beginning of change.