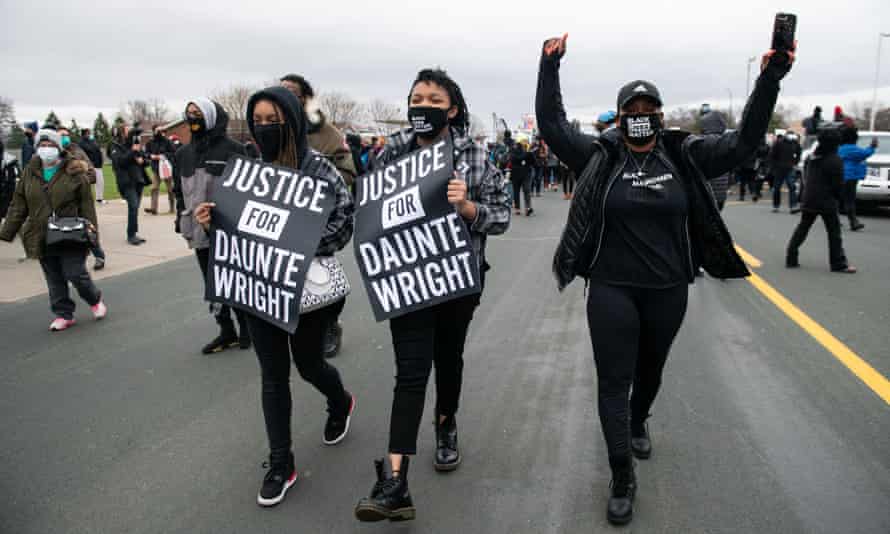 At around two in the afternoon on Sunday, April 11, 20-year-old father Daunte Wright and his girlfriend were driving to Daunte’s brother’s house when they were pulled over by Brooklyn Center police for their SUV’s expired license plate. Tensions escalated when officers noticed he had air fresheners hanging from his rearview mirror, later realizing that there was a misdemeanor warrant issued for his arrest due to his absence at a hearing to which he had been summoned.

Regardless of the officers’ given reasons for pulling Daunte over, his warrant was not a death sentence. It is widely believed that the license and air fresheners have been used as an excuse for a pretextual stop, which often targets Black people in the United States. As NBC News so aptly put it, “Daunte Wright was stopped for expired plates, but driving while Black may have been his ‘crime.’” Regardless of why exactly Daunte was stopped, the events that followed are what secured his name’s way to international headlines. When he attempted to get back into his car and drive away, now-former officer Kimberly Potter shouted “Taser! Taser! Taser!” and fired her gun instead. The shot struck Daunte in the chest and Kimberly was heard on bodycam footage shouting “Holy s---, I just shot him.” Despite his injury, Daunte got back into his car, drove a few blocks, and ultimately crashed his vehicle. While his girlfriend sustained only minor injuries, Dante’s gunshot wound was fatal and he was pronounced dead at the scene.

Only hours after news of Daunte’s death broke, crowds gathered to protest the injustice, fueled by the homicide of George Floyd that took place only ten miles from the scene and by the ongoing trial of his murderer, Derek Chauvin. While initially peaceful, chaos soon followed, as protesters’ rock and water bottle projectiles were met with the police’s teargas, pepper spray, and flash bombs. On Monday night, it was reported that over forty arrests had been made.

The Wright family hired Benjamin Crump, who also represents the Floyd family, as their civil rights lawyer, and George Floyd’s family members and girlfriend met with the Wrights on Tuesday, April 13. Floyd’s brother Philonese declared that "We will stand in support with you... The world is traumatized, watching another African American man being slayed... Minneapolis, you can't sweep this under the rug anymore…We're here and we will fight for justice for his family, just like we're fighting for our brother.”

In response to the events of April 11, there have been a variety of responses from different figures. Brooklyn Center police chief Tim Gannon referred to the shooting as a mere “accidental discharge,” while Senator Ted Cruz of Texas chose to dismiss the very serious incident by referring to it as “what now appears to be a tragic accident” and by saying that “in the course of interactions with law enforcement, sometimes there are accidents that occur.”

Others have chosen to acknowledge Daunte’s death as what it really is: a very grave, all-too-familiar, and saddening matter that should not be shrugged off and dismissed, with those in the wrong getting to walk away with nothing more than a slap on the wrist. Benjamin Crump said that "Daunte Wright is yet another young Black man killed at the hands of those who have sworn to protect and serve all of us — not just the whitest among us. As Minneapolis and the rest of the country continue to deal with the tragic killing of George Floyd, now we must also mourn the loss of this young man and father. This level of lethal force was entirely preventable and inhumane,”. Brooklyn Center mayor Mike Elliott claimed that "In this country, if you’re Black and you get pulled over by the police, you have a very much higher chance of being dead just because you’re black, and just because you’re encountering police… That is a fact we have to all wrestle with… We've seen this far too many times where a young black man or woman is pulled over by police or encounters police and they end up dead. People protesting are asking when will this stop.” Wright’s mother has stated that she hopes the perpetrator will be “held accountable for everything that she's taken from us,” and his father has added that "I can't accept that -- a mistake. That doesn't… sound right.” The news even penetrated the sandstone walls of the White House, with President Biden assuring the public that “We do know that the anger, pain and trauma amidst the Black community is real” and Vice President Kamala Harris stating that “Our nation needs justice and healing and law enforcement must be held to the highest standards of accountability."

Since the shooting, both Officer Kimberly Potter and Police Chief Tim Gannon have filed for resignation. In her resignation letter, Kim Potter, who had served on the force for the past 26 years, stated that she believes “it is in the best interest of the community, the department, and my fellow officers if I resign immediately.” She has yet to issue an apology to the family and show even an ounce of remorse for her inexcusable actions.

Despite the seemingly endless barrage of global protests following the murder of George Floyd in the summer of 2020, recent events make it evident that there is much work to do in the reformation of the policing system and in the eradication of systemic racism. Daunte Wright should still be alive today, and his life will not be discarded with a sigh as yet another Black person whose life was senselessly taken by a member of the force that was meant to protect him.

Please find below action items to take in support of Daunte Wright’s family: