On March 29, 2021 in Chicago, Illinois, a 13-year-old boy named Adam Toledo was shot and killed by Officer Eric Stillman

Atharv Bhavanasi
and
July 6, 2021
in
Justice
Courtesy of ABC Chicago 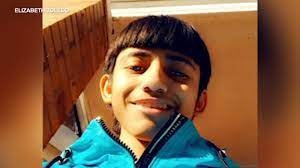 On March 29, 2021 in Chicago, Illinois, a 13-year-old boy named Adam Toledo was shot and killed by Officer Eric Stillman. Adam Toledo was a 7th grader at Gary Elementary, described by his mother as a sweet boy with a love for legos and hot wheel cars. On March 26th, The Sun revealed Toledo’s mother had reported Toledo to be missing. Adam returned the next day but his mother did not inform the police of his return (although he left their home again on late March 27th or early March 28th). On the morning of the 29th, police were dispatched after they were alerted to the city’s gunfire detection technology; the two suspects attempted to flee and a chase ensued.  Toledo continued to run, while Ruben Roman, the 21-year-old man who was with him, was apprehended. The surveillance footage camera revealed Stillman repeatedly shouting at Toledo to stop and to put his hands up. The footage shows that Toledo stopped and began to raise his hands when the officer fired his weapon. Once shots were fired, Stillman asked for an ambulance and appears to have tried to get a medical kit to seal the chest wound. Stillman also said he attempted CPR but didn’t feel a heartbeat.

CNN reports that Timothy Grace, a union lawyer representing Stillman, said “the juvenile had a handgun in his right hand, given verbal direction, told to drop and stop and to adhere to the police officer's valid, lawful orders and the juvenile began to turn." He adds that "at that point [the officer] has no cover, no concealment, he's left with no other option.” Grace then went on to claim that Stillman felt horrible about the outcome but was well within reason to use deadly force. Police say that the handgun was visible in the surveillance footage for eight-tenths of a second, his right arm disappearing, before raising his hands.

On the other side lies Adeena Weiss Ortiz, Toledo’s family attorney, who insists Toledo was not holding a gun when he was shot, and the justification for using deadly force is nonsense. The attorney claimed, “‘at the time Adam was shot, he did not have a gun. OK?" and adds that "in that slo-mo version (of one of the videos), whatever he had in his, in his hand, whether it was a gun or something else, there was something in his hand, he approaches the fence, he lets it go, he turns around, and he's shot.” The family’s attorney continued to say that even if what he had in his hand was a gun, he tossed it aside. Toledo’s family have said that they may pursue legal action in the future against Eric Stillman and the City of Chicago.

Chicago Mayor Lori Lightfoot also became involved in the case, opting to remain neutral. Prosecutors have said that Toledo’s right hand and Roman’s gloves tested positive for gunshot residue. Roman was the one who fired the gun, but Toledo was holding it while Roman was being detained. However, according to CBS, Cook County's State Attorney Sarah Sinovic said Toledo did not have a gun in his hand and that the surveillance camera “spoke for itself.” CBS stated Mayor Lightfoot declined to confirm or deny whether Toledo held a gun in his hand when the police killed him, stating instead that the investigation is still ongoing. Lightfoot has said that there is no evidence that Adam Toledo had shot at the police. On April 16th, thousands of protestors rallied together against the murder of Adam Toledo by the police. Adam Toledo’s death is a tragic incident as more and more cases like Toledos’ are appearing. On April 11th, Daunte Wright, a 20-year old Black man, was shot by a policewoman, and on April 20th, another policeman shot Ma’Khia Bryant, a 16-year old foster teen. According to ABC, studies reveal that police officers are disproportionately killing Black Americans and for every “one fatal shooting,” two or three non-fatal shootings are not picked up. This means the number of police shootings against the colored community is very likely to be even higher. According to NBC, Anthony Bui of the David Geffen School of Medicine at the University of California stated, “‘Police violence disproportionately impacts young people, and the young people affected are disproportionately people of color...”’ There are several ways we can help shrink the racial bias in our society and this starts with educating ourselves without burdening black people to be our teachers. We also need to listen more to others’ perspectives and reflect on our own behavior. Donating to, supporting, or joining anti-racist groups such as NAACP and Color of Change, which are trying to fight racial inequality through legislation, can also help make an impact.