The current USWNT has filed a class-action lawsuit against the U.S. Soccer Federation, arguing they had experienced gender-based discrimination in terms of payment.

Ayesha Middya
and
September 24, 2019
in
Sports
Courtesy of Slate 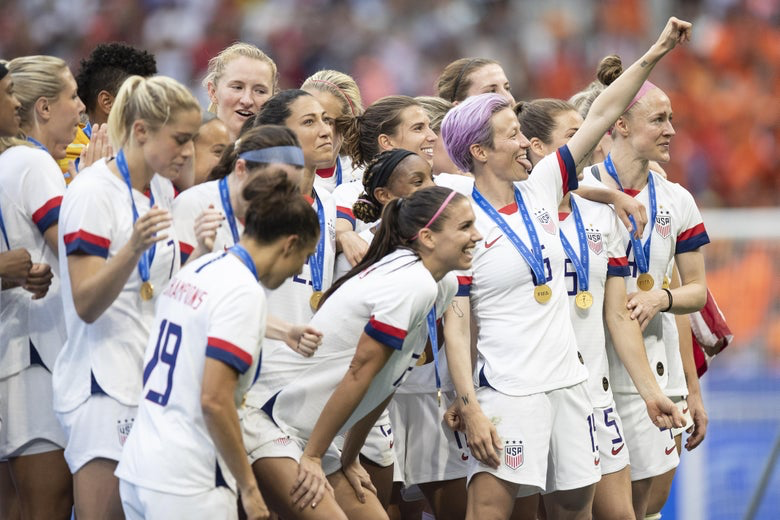 The United States Women’s National Soccer Team has just recently won the 2019 Women’s World Cup, earning the praise of millions worldwide. Consequently, the issue of discrepancies in pay compared to the men’s national team have risen once again, following a lawsuit filed by the Women’s National Team. According to CBS sports, all 28 members of the current USWNT roster filed a class-action lawsuit against the U.S. Soccer Federation on March 8, arguing they had experienced gender-based discrimination in terms of payment.

Some notable points of the lawsuit allege that in 2014, the federation paid the men’s team $5.375 million in bonuses in the World Cup, despite being eliminated in round 16, while the women got $1.725 million after winning the whole thing in 2015. Additionally, the women actually spend more time in training camps and playing games than the men because of previous success in matches and tournaments. From 2015-18, the women played 19 more matches than the men. Despite this, women consistently were paid almost 38% of what men were during periods in which both teams won.

Another notable argument from the lawsuit is that “there have been violations of the Equal Pay Act, which prohibits wage discrimination between men and women who perform similar jobs, and Title VII of the Civil Rights Act of 1964, which prohibits employers from discriminating against employees based on sex, race, color, national origin and religion,” and as such, the team is demanding a jury trial for the case.

The widely disputed issue of women’s pay in sports should no longer be as prominent of an issue as it is currently. It has been proven without a measurable doubt that the women’s team deserves the same amount of pay as the men’s team. The women’s team has historically been more successfully. They have won 4 World Cup’s and placed in second or third in the remaining World Cup’s. The men’s team hasn’t won a World Cup since 1930, and they have not even come close to winning since then. The Women’s National Team has proven time and time again that they are invincible, and it is time their payment reflected that.